America Is Betting Big on the Second Island Chain 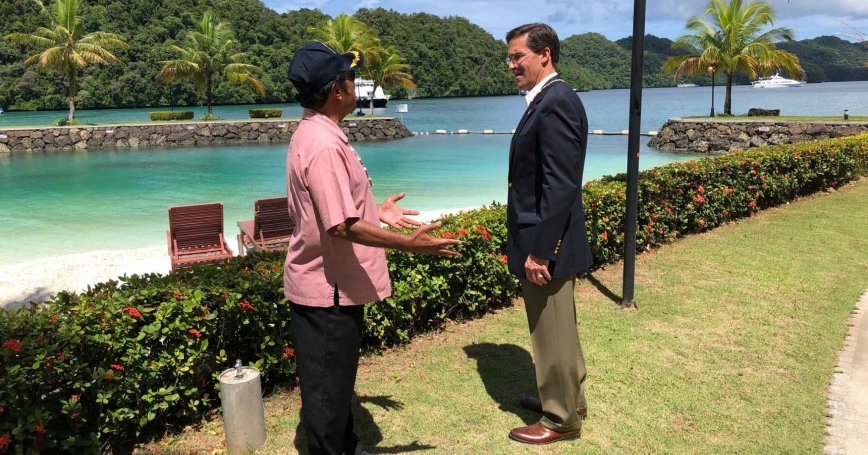 These geostrategic concerns are what likely motivated Esper's recent trip to the Second Island Chain.

Although surprising to most observers, Esper's decision to visit the tiny state of Palau is rather unsurprising if viewed within the context of the Indo-Pacific Strategy (PDF) and the push to counter China throughout the Indo-Pacific. To be sure, he became the first secretary of defense to visit Palau, so from that perspective, it was a very unique trip. But beyond that, Palau, along with the Marshall Islands and Micronesia, make up what is known as the Freely Associated States (FAS). Washington maintains unique international agreements with each of the FAS called Compacts of Free Association (COFAs). According to the COFAs, Washington, in exchange for granting benefits to FAS citizens in the United States, receives virtually unrestricted military access to the entire FAS region, which contains open ocean approximately the size of the continental United States.

As I have previously described with RAND colleagues, this region is “tantamount to a power projection superhighway running through the heart of the North Pacific into Asia, connecting U.S. military forces in Hawaii to those in the theater, particularly to forward-operating positions on the U.S. territory of Guam.” In other words, Palau is part of a critical logistical network that enables U.S. troops to move through and within the FAS region uncontested.

While on the ground in Palau, Esper was keen to raise with President Tommy Remengesau the importance of agreeing to a renewed COFA starting in fiscal year 2024 that would guarantee the continuity of yearly funding to Palau. Without a renewed COFA, Palau could become more susceptible to Chinese offers to develop Palau via the Belt and Road Initiative. Palau might also eventually decide to sever diplomatic ties with China's rival Taiwan in favor of recognizing Beijing. Doing so would run counter to the U.S. TAIPEI (Taiwan Allies and International Protection Enhancement Initiative) Act that seeks to preserve and promote Taiwan's regional and global diplomatic space. Just in the last five years alone, China has poached two partners away from Taiwan in the Pacific—the Solomon Islands and Kiribati—leaving it with only four remaining partners in Oceania.

Indeed, the Trump administration has been quite attentive to the FAS region due to China's rising influence. In May 2019, President Donald Trump became the first president to meet with all three FAS leaders at the White House. Then, in August 2019, Secretary of State Mike Pompeo became the first sitting secretary to visit Micronesia—a trip that was clearly, in large part, meant to blunt growing Chinese influence there as Micronesia is the only FAS member to recognize China over Taiwan. Also, for the first time, the Trump administration established a dedicated National Security Council director position for Oceania, highlighting further the importance of the region.

Esper was also keen to speak with Remengesau about cooperation on maritime domain awareness, an oblique reference to U.S. plans to build an over-the-horizon radar facility in Palau. Once completed, the radar will be able to identify and track enemy air and surface assets at long range, ideal for complicating China's expanding reach. Separately, in a very promising sign for Washington, Remengesau noted that “Palau's request to the U.S. military remains simple—build joint-use facilities, then come and use them regularly…the U.S. military's right to establish defense sites in the Republic of Palau has been under-utilized for the duration of the Compact.”

Esper's second and final stop in the Second Island Chain was to the U.S. territory of Guam. Guam is home to thousands of U.S. troops and key military bases, including Naval Base Guam and Andersen Air Force Base, which were combined in 2009 into Joint Region Marianas. Given the significant assets located there, Guam would certainly play an indispensable role in future Pacific combat as the hub of U.S. military operations in the Second Island Chain. The problem, however, is that the hub currently lacks spokes—at least for now. But that is likely to change to avoid concentrating all American firepower in one, increasingly vulnerable, location. While in Guam, Esper spoke to the governor of another U.S. territory, the Commonwealth of the Northern Marianas (CNMI, comprised of Saipan, Tinian, and Rota), and expressed interest in forming a closer network with CNMI and the FAS.

Uncoincidentally, Esper also met with Japanese Defense Minister Kono Taro while visiting Guam. The two leaders discussed ongoing plans to relocate U.S. Marines from Okinawa to Guam, but they also reiterated the importance of maintaining a “free and open” Indo-Pacific. On the latter point, Japan is well aware of the geostrategic value the Second Island Chain potentially offers an adversary. Imperial Japan leveraged them to great effect against the United States during World War II. Therefore, Tokyo seeks to prevent Beijing from similarly gaining control of them and forward-deploying troops to complicate allied war plans. Australia, New Zealand, and Taiwan all share these concerns, and are working in concert with the United States and Japan to block, or at least blunt, China's rising influence in Oceania.

Finally, and although left unmentioned during Esper's visits, is the prospect that Washington might choose to deploy ground-based intermediate range missiles to the Indo-Pacific. On August 2, 2019, the United States withdrew from the Intermediate-Range Nuclear Forces (INF) Treaty that prohibited the deployment of conventional ground-launched ballistic and cruise missiles between the ranges of 500 to 5,500 kilometers. Now that Washington is no longer a party to the agreement, it can deploy these missiles to accepting host nations. Japan and Australia are obvious candidates, but Palau—the only member of the FAS within range of China—could be considered as well. Guam and CNMI are also within range and may be tapped to support these efforts.

Washington clearly has deep and abiding interests in the Second Island Chain. China's concurrently growing influence in the region, however, could complicate U.S. plans.

Going forward, Washington clearly has deep and abiding interests in the Second Island Chain. China's concurrently growing influence in the region, however, could complicate U.S. plans. For instance, Micronesia has tried to block the secession of one of its main islands, Chuuk, as Chuukese independence could spell the end of the COFA and give Beijing an opportunity to establish bilateral relations with Chuuk. Palau and Marshall Islands recognize Taiwan, but are routinely bombarded with offers to switch allegiance to Beijing. Additionally, the Trump administration's position on climate change does not sit well with Pacific Island nations, which are facing the existential threat of sea rise. Beijing has pledged support on this issue, while Washington seems to be ignoring it, effectively undermining American influence.

Overall, however, the good news is that the United States is in a relatively strong position in the Second Island Chain due to the territories it has in the region and the unique international partnerships it has forged with the FAS. Any change would probably occur incrementally and would be reversible through the combined efforts of the United States and its partners.

This commentary originally appeared on The Diplomat on September 5, 2020. Commentary gives RAND researchers a platform to convey insights based on their professional expertise and often on their peer-reviewed research and analysis.