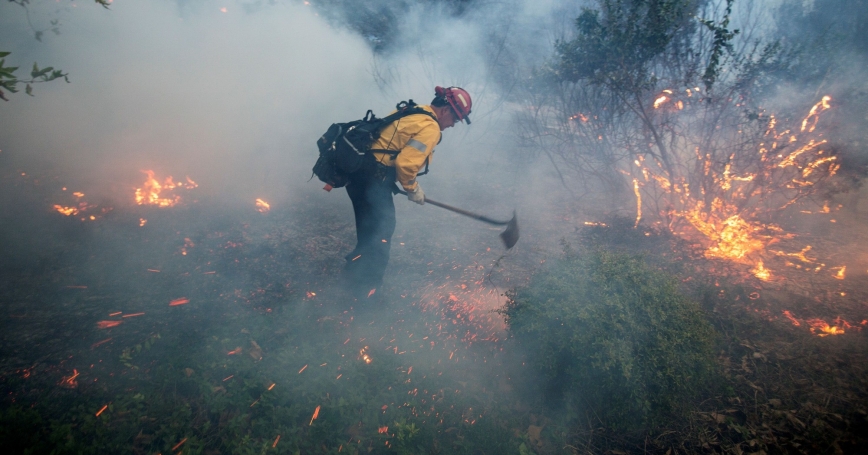 by Jay Balagna and Aaron Clark-Ginsberg

As anyone watching forest and rangeland hills aglow, or anyone watching air quality indices in a western city can attest—the 2020 wildfire season is extreme. Firefighters and scientists worry this is our new normal.

There is good reason to fret: 2020 is the worst fire season on record, with nearly 13 million acres burned, 14,000 structures destroyed, and fire suppression costs reaching the $3 billion mark. These numbers—acreage the size of Maryland, and a building toll that would cover a third of Manhattan—still don't do justice to the cost of all the damage.

Blazes destroyed entire towns like Malden, Wash. Dozens have died. Mental and physical health concerns have plagued communities already battling a respiratory pandemic, COVID-19. States cannot afford to keep up with costs and coverage, and aid is a political sticking point at the federal level, as recent tension between the White House and California has shown.

Year after year, details change but headlines repeat—fires across western states scorch forests, rangeland, and neighborhoods, wreaking havoc on rural economies and pushing smoke into cities. Despite their near universal effects, a loose patchwork of agencies and responders battle wildfires. The 2020 season is more evidence that this piecemeal approach isn't working. If the West is to survive, we must develop a comprehensive fire strategy.

The current approach to wildfire management does not account for these disasters' complexities. Climate change, forest mismanagement, aging infrastructure sparking blazes, population concentrations in high-risk areas, and incentives that favor response over mitigation all play a role in shaping wildfire risk. Truly addressing risk is about intervening at every critical point to prevent destructive fires.

It is also about managing trade-offs: Preventative prescribed burns reduce risk but produce smoke; a reliance on seasonal firefighters lowers costs but creates a systemic brain drain; and housing policies that push neighborhoods into dangerous territory maintain a status quo on our street maps while perpetuating social inequities—people of color and those impoverished are often the first in harm's way. If we want to reduce risk, we need a strategy that considers all these factors and more.

To be sure, there are good people doing good work—impassioned and committed wildland firefighters. Likewise, there are forward-looking policies from government agencies, new approaches from community organizations, cutting-edge research from universities, and a growing consensus to reintroduce sustainable fire with tactics like those Native Americans and Alaska's indigenous peoples historically used. What's lacking is coordination. Wildfires don't respect state lines, organizational boundaries, the election cycle, or an accountant's ledger.

In combination with this complexity and ever-increasing risk, our wildfire management and response system is burdened by labor system inefficiencies. Wildland firefighters are seasonal workers, with many losing their jobs completely in the winter. This workforce churn results in costly training of new firefighters every year and thins the ranks of an expert workforce. The work is also low-paying, which when combined with its seasonality, pushes expertise from the ranks. Those tactics tax an expert workforce that could be put to work in calm months on prescribed burns and fire prevention projects. If we want to live better with wildfire, we likely need to consider whether—and if so how to—better utilize those workers year-round.

To best manage fire seasons, there could be a focus on mitigation and preparedness.

To best manage fire seasons, there could be a focus on mitigation and preparedness. Vulnerable areas that haven't burned yet could be identified and treated. Clear and prompt evacuation messaging for when fires are burning could be prepared well in advance. And new ideas could be solicited for where and how to rebuild. The wildfire management systems in place today are a scattershot attempt at prevention. They can provide confusing and often contradictory alert messaging. Rebuilding plans can leave communities the same as before a blaze—or worse.

Policymakers might consider a coordinated and comprehensive effort that brings together the best minds in government, communities, and academia to help navigate our future living with wildfire, a center for wildfire excellence. The objective: effectively address the multifaceted prevention, response, and recovery challenges brought by each year's record-breaking fire season.

No single group or entity could do this alone and the combined plans for future summers would likely be most effective if they are proactive and focused on the long term. With a coordinated group aimed at these goals, we might build a more sustainable West that lives with the inevitable wildfires, rather than one that's always back on its heels trying to run from them.

A center of excellence like that—be it based in a university, think tank, nonprofit, or government agency—might be able to help us plan and build that sustainable West.

Jay Balagna is a Ph.D. student at the Pardee RAND Graduate School and an assistant policy researcher at the nonprofit, nonpartisan RAND Corporation. His research interests include emergency response systems, disaster response and recovery, and the influence of climate change on wildfires. Aaron Clark-Ginsberg is an associate social scientist at RAND. His research focuses on disaster risk management, including issues related to disaster risk reduction, response, and recovery. Both Balagna and Clark-Ginsberg worked as wildland firefighters before coming to RAND.