Biden and the U.S. Intelligence Community 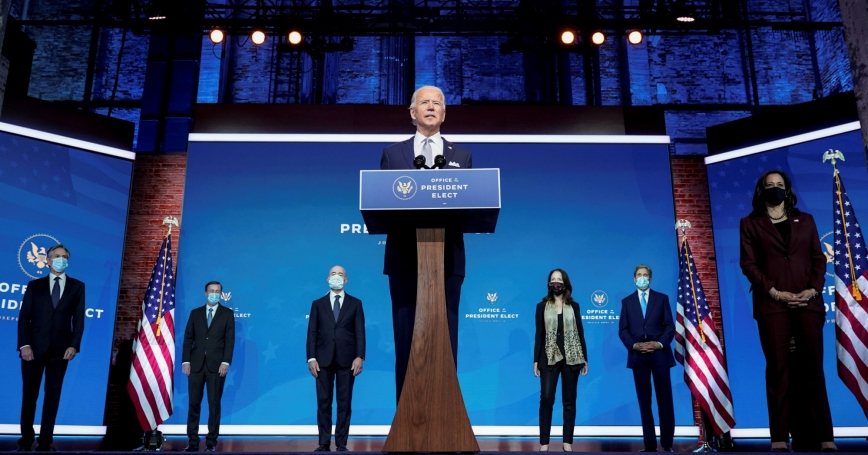 President-elect Joe Biden stands with his nominees for his national security team at his transition headquarters in Wilmington, Delaware, November 24, 2020

President-elect Biden faces a wide range of policy options once he is inaugurated in January. Among them may be restoring the role of the U.S. Intelligence Community (IC) as a valued source of insights to underpin decisionmaking in the White House.

Given Biden's decades of government experience, he knows the importance of intelligence in national decisionmaking. As a first step Biden has chosen a new Director of National Intelligence (DNI) who has experience in both the IC and the White House that equip her to lead a renaissance in intelligence affairs. Central to such a renaissance would be renewed emphasis on the IC's continued commitment to delivering assessments and insights objectively and without political shading.

The law (PDF) that established the DNI assigned specific authorities (PDF) to the individual and the office. The DNI serves as the president's chief intelligence adviser, coordinates the funding requests for much of the IC's budget, and establishes policies and procedures that create a unity of mission without diminishing the unique strengths of individual components. In announcing Haines's nomination Biden said she “will be supported, trusted, and empowered to protect national security, without being undermined or politicized.”

President-elect Biden knows the importance of intelligence in national decisionmaking.

The first four DNIs appointed by presidents Bush and Obama implemented almost all of the 9/11 (PDF) and WMD commission recommendations to reform the IC. In doing so, they established a meaningful role for the office of the DNI. They succeeded in part because they all had long executive branch careers, foreign deployments, and experience with the IC. They knew the IC and its overseas missions. They focused on fostering an integrated community culture to achieve a unity of effort without unduly encumbering the core missions of the individual intelligence organization components.

President Trump cycled through four DNIs in four years, publicly criticizing them when IC insights contradicted his views. This may have diminished the value the DNI can provide to the president, the executive branch, Congress, and the IC. He eased the first two out of office after they delivered findings and analysis that were at odds with administration views. They were followed by two others, both Trump allies with comparatively little relevant experience.

A president is best served by having a trusted individual as the DNI, one that can be counted on to deliver the IC's best assessments, regardless of how the message might be received. The IC's challenge is to provide information that gives the president and other senior policymakers an understanding of the interests and strategies of the other international actors involved. A president can choose to ignore or disagree with the IC's assessments, but needs to hear them because they are generated by an experienced, globally deployed intelligence workforce leveraging unique collection and analysis capabilities.

To clearly make a change in the IC's future planning, the incoming president could consider directing his DNI to lead a series of task forces to prepare the IC for the future. Key challenges might include how to posture the IC to derive insight from the exponential growth of publicly available digital information, conducting clandestine operations in a world with ubiquitous sensors, countering virtual societal warfare akin to Russian interference in U.S. elections (PDF), and making investments in new intelligence capabilities amidst future budget cuts.

Biden faces a daunting domestic and foreign policy agenda. His nomination of Haines and charge to give him unvarnished insights goes a long way toward highlighting the importance of the Intelligence Community's role to inform foreign policy and defense decisionmaking.

This commentary originally appeared on The Hill on November 24, 2020. Commentary gives RAND researchers a platform to convey insights based on their professional expertise and often on their peer-reviewed research and analysis.