A New Way to Manage the Growing Global Refugee Situation 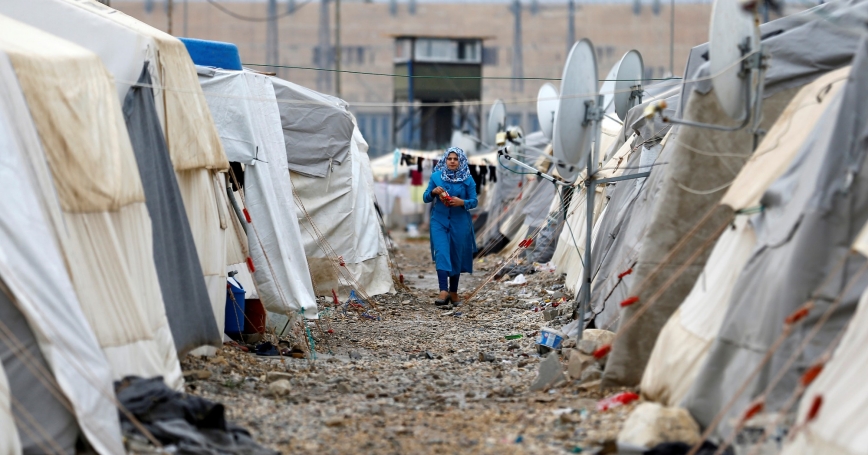 A Syrian refugee woman walks between tents in Nizip refugee camp, near the Turkish-Syrian border in Gaziantep province, Turkey, November 30, 2016

As of this year, a full 1 percent of humanity (80 million people) is living in displacement—as refugees, internally displaced persons, or asylum-seekers—because of conflict or persecution. To put the number in context, it is similar to the population of Germany (about 83 million) and greater than the population of the United Kingdom (about 67 million). Forced displacement has doubled in the past decade, and it is likely to rise still faster in the coming years as people are pushed to leave their homes because of climate change or natural disasters; a midrange, widely cited estimate of climate migration is 200 million migrants by 2050.

The world's existing strategies for managing the displaced are no longer sufficient, but the next U.S. administration has an opportunity to lead the world in creating a new way forward.

There are five fundamental problems with how displaced people are managed today. This is the case for all of the 80 million forcibly displaced, and in particular among the nearly 30 million of them who have crossed a border to another country as refugees.

The world's existing strategies for managing the displaced are no longer sufficient.

First, current approaches lead to ballooning numbers of people who live in exile in limbo for decades or generations, without a solution that permits them to restart stable lives. Although the United Nations promotes helping displaced people find “durable solutions”—returning home, integrating into their new host community or country, or resettling to a third country—the vast majority stay in limbo.

Returns are rare, as conflicts remain unresolved and as those who fled are reluctant to return to dangerous situations. Although some host countries allow refugees to be naturalized as citizens, many have policies that limit integration or keep displaced people in camps. Resettlement to other countries—a process by which a third country accepts a refugee—has not kept pace with displacement. Less than 1 percent of refugees are resettled in another country. (With the exception of the past few years, the United States has taken in the vast majority. In 2015, the United States accepted 62 percent of all refugees resettled globally.) But the most common and enduring solution is extended exile. Millions live this way indefinitely—not able to return home or put down roots elsewhere.

Second, existing refugee policy puts enormous strains on host communities and host countries. Around 85 percent of refugees live in developing countries, which are themselves often struggling to provide for their own populations. The countries hosting the most refugees are Turkey, Colombia, Pakistan, Uganda, and Germany. Refugee influxes are so large in some cases that they cause demographic changes; crowd housing, schools, and hospitals; and strain public services. Host communities worry that their jobs will be taken by desperate newcomers who will work for less, and sometimes locals resent the refugees for receiving aid even as they themselves live in poverty.

Such circumstances strain stability and security in host countries. Surges of new residents have led to political backlash. The 2015 migrant crisis in the European Union led to the rise of far-right political parties in multiple countries and was a contributing factor to Brexit. And among the refugee populations, poor conditions have sometimes led to radicalization. Risks are highest when refugees face poor opportunities in education and jobs, restricted freedom of movement, and alienation from the societies in which they live.

Third, policy solutions designed for the near term in refugee crises establish fundamentally problematic structures that last into the future, leading to high human costs. Forty percent of the world's refugees live in camps. Camps are meant as temporary solutions for an urgent short-term humanitarian need. Yet they often grow into towns that endure for decades, trapping people in substandard, squalid conditions. Human beings who have committed no crimes should not live confined to camps without freedom of movement. Camps set up for Palestinians in Middle Eastern countries in 1948 and 1967 endure to this day. The Dadaab camps in Kenya were established in 1991 and 1992, yet people there still live in tents, face restrictions in leaving the camps, survive on food rations provided by multilaterals, and have few education opportunities past elementary school.

Although some host countries allow refugees to be naturalized as citizens, many have policies that limit integration or keep displaced people in camps.

Fourth, the current approach is economically unsustainable, keeping displaced people in grinding poverty and in dependence upon aid, and draining government budgets of both host countries and donor governments. In many host countries, refugees lack or have limited rights to work, as host country leaders fear refugees will take citizens' jobs. At the same time, there is not enough donor money to support many millions of people indefinitely. Caught in a Catch-22 of not being allowed to work while not receiving enough aid to survive, refugees often work under the table, under minimum wage, and without social protections. When parents cannot earn enough to support families, it leads to higher rates of child labor and early marriage for girls. Not able to obtain citizenship or required documentation in new locations, refugees often cannot obtain bank accounts, access credit, save, or borrow. When refugees live outside of camps in urban areas, they depend upon host government public services, such as education and health. Developing country host governments absorb these costs, without tax revenues from refugees (who are not working legally) and with most donor money going toward U.N.-managed services. Meanwhile, the United States provides more than the next nine donors combined to the United Nations High Commissioner for Refugees. With coronavirus pandemic expenses to pay in coming years, it is not clear how willing or able it and the other main donor countries will be to continue increasing contributions.

Fifth, outcomes in terms of human development and human rights are worse for refugees than local populations, creating a global underclass of people. In many countries, refugees have much lower educational and job prospects—a huge waste of human capital and potential. Indeed, over half of refugee children globally are not in school, and host countries struggle to absorb them into their education systems. Those in urban areas often struggle with access to housing, basic public services, and using their skills in jobs.

Leadership to reform this global system is lacking, and there are few mechanisms to improve it. Established after World War II in response to displacement in Europe, the 1951 Refugee Convention established basic principles to manage refugee situations. It was not set up to handle numbers of this magnitude or time frames of this duration, and many developing country refugee host countries are not signatories to it.

Since then, there have been incremental changes made to existing structures and legal principles. The 2018 Global Compact on Refugees (PDF) has been the biggest update, laying out principles that donor countries should support host countries in provision of public services and promoting the self-sufficiency of refugees instead of the current often indefinite dependency. However, it is not legally binding, the United States is not a signatory, and it does not provide concrete mechanisms for implementing such new principles.

In short, new—and practical—solutions are needed to address this growing global problem. Under incoming President Joe Biden, American leadership is particularly called for, given the United States' role as the primary humanitarian funder for refugee situations globally and, for most of recent history, the main recipient of resettled refugees.

One solution is to put more effort into the diplomacy of conflict prevention and resolution so people are not displaced at this scale in the first place. The United States and others could also offer more types of legal, flexible visa pathways for refugees to migrate. The United States has an opportunity both to increase the numbers of refugees it accepts—as Biden has pledged to do—and to encourage other countries to take additional refugees, including in other regions, such as Latin America, Asia, and Africa. The United Nations could work with host countries to gradually close camps or lift restrictions to freedom of movement for those within the camps. If refugees are legally allowed to work, they could also be expected to pay taxes, which could help finance their own public services such as education or health care. Donor funding could be prioritized to help host countries expand existing national public services, rather than supporting parallel services run by multilaterals in perpetuity. And finally, the United States could lead an initiative with other donor countries, the United Nations, and refugee host countries to promote self-sufficiency and human capital development for refugees, by enabling better access to education, access to banking and the internet, better tools for providing identity documents, and allowing refugees to use their skills in their occupations in their host countries.

Existing systems are dysfunctional, harmful, and poorly suited to the needs of displaced people and their host countries.

Existing systems are dysfunctional, harmful, and poorly suited to the needs of displaced people and their host countries. Fixing them may seem like a big task, but it is an urgent one. Permanent refugee populations strain stability in multiple countries, deplete government budgets, and create a global underclass of people not able to partake in the normal activities of human life. This does not meet global humanitarian values. The next administration has the opportunity to exercise American leadership in solving one of the biggest human development issues of our era—it should run with it.

Shelly Culbertson is a senior policy researcher focusing on refugees at the RAND Corporation. She is the author of The Fires of Spring; A Post-Arab Spring Journey Through the Turbulent New Middle East.

This commentary originally appeared on Foreign Policy on December 17, 2020. Commentary gives RAND researchers a platform to convey insights based on their professional expertise and often on their peer-reviewed research and analysis.