Biden Doubles Down on Trump's Taiwan Policy, but Will It Last? 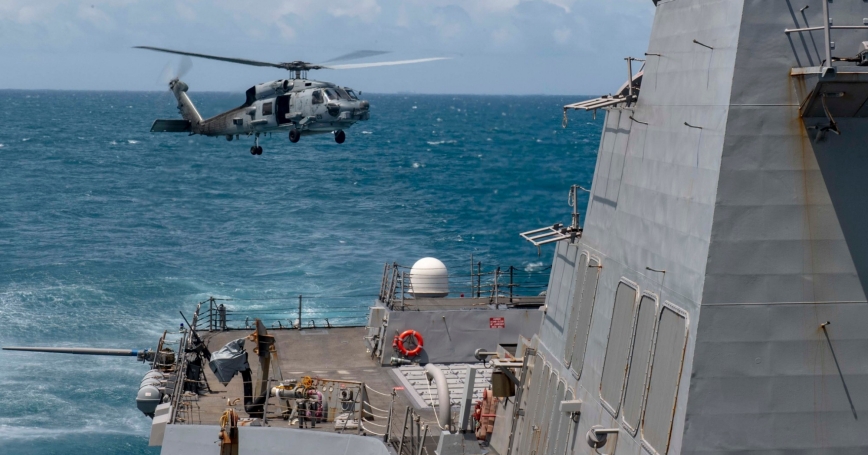 An MH-60R Sea Hawk helicopter takes off from the flight deck of the USS Mustin in the Taiwan Strait, August 18, 2020

It's an open secret that Taiwan welcomed the Trump administration's policy to significantly strengthen U.S.-Taiwan relations, and it was jittery about the transition to the Biden administration. Early indications, however, are that the Biden team plans to double down on Trump's Taiwan policy.

For example, conventional logic inside the Beltway held that the Trump administration's decision, in the eleventh hour, to end self-imposed contact guidelines with Taiwan, would be unappreciated by the incoming Biden team. However, the Biden administration thus far has embraced the Trump decision to upgrade Washington's unofficial partnership with Taipei. In an unprecedented move, the incoming U.S. administration invited the de facto Taiwanese ambassador to attend its inauguration ceremony.

Additionally, on January 19, Biden's then-nominee for Secretary of State, Antony Blinken, supported the end to contact guidelines “to make sure that we're acting pursuant to the mandate in the [Taiwan Assurance] act that looks at creating more space for contacts.” If such an approach is sustained, then the Biden administration may look to leverage upgraded contact guidelines by sending senior-level U.S. officials to the island—as the Trump administration did—to meet with Taiwanese President Tsai Ing-wen and their counterparts.

Separately, when China last week flew an unprecedented number of military aircraft, including eight bombers, into Taiwan's air defense identification zone, the Biden administration was swift to strongly condemn its aggressive behavior. It said: “We urge Beijing to cease its military, diplomatic, and economic pressure against Taiwan and instead engage in meaningful dialogue with Taiwan's democratically elected representatives...Our commitment to Taiwan is rock-solid.” The Biden administration further authorized a new warship transit through the Taiwan Strait, in a clear message of deterrence to Beijing.

The Biden team has shown a particularly hardline edge toward Beijing, which also benefits Taiwan.

Blinken has been particularly forward-leaning on advancing the Taiwan relationship. In August, he endorsed Tsai's decision to lift trade barriers on U.S. pork—a long-standing and contentious issue—that may set the stage for negotiating a U.S.-Taiwan free trade agreement. Blinken further affirmed his support for Taiwan's membership in international forums such as the World Health Organization, which China has blocked for years.

Moreover, as was done under Trump, the Biden administration is championing democracy over authoritarianism. Biden stated in early 2020 that within his first year in office, he plans to hold a “Summit of Democracies” to, in his words, “renew the spirit and shared purpose of the nations of the free world.” In this regard, strengthening U.S. support to Taiwan against China would be an appropriate fit.

The Biden team also recently applauded the decision by the small South American nation of Guyana to open a Taiwan Office for enhanced interactions with the island, even though the two are not formal diplomatic partners. Although Guyana quickly reversed its decision after China expressed anger, the brief episode shows that the Biden team clearly supports the TAIPEI [Taiwan Allies and International Protection and Enhancement Initiative] Act. Passed in 2019, the TAIPEI Act encourages governments and international organizations to increase their official and unofficial relations with Taiwan.

Meanwhile, the Biden team has shown a particularly hardline edge toward Beijing, which also benefits Taiwan. For example, the new Secretary of Defense, Lloyd Austin, referred to China in Senate testimony as being the “pacing threat” for the entire Pentagon. Biden's nominee to become Deputy Secretary of Defense, Kathleen Hicks, said in testimony that given the growing China threat, the U.S. commitment to Taiwan must be “crystal clear.” Biden's National Security Adviser, Jake Sullivan, has referred to China as a “serious strategic competitor.” Biden, in his first major foreign policy speech at the State Department, said China was “our most serious competitor.” Meanwhile, every single office within Biden's National Security Council, whether technology, climate, health, etc., will cover China to some extent—once again underscoring that the administration has taken to heart that the U.S. and China are indeed in great power competition.

The negative consequences of bolstering U.S.-Taiwan ties are that China would almost certainly intensify its diplomatic, economic, and military threats against Taiwan and the United States.

Of course, the negative consequences of bolstering U.S.-Taiwan ties are that China would almost certainly intensify its diplomatic, economic, and military threats against Taiwan and the United States. Any hope that the Biden administration might have had for some sort of bilateral “reset” with China in order to find areas of cooperation on global challenges, most notably on climate change, is likely to end early. China recently floated a road map to repairing U.S.-China relations, requesting, among other things, that the U.S. would “stop provocations on the Taiwan question.”

Despite these concerns, the Biden team, for the time being at least, appears poised to opt for a stronger relationship with Taiwan as set forth under the Trump administration. Only time will tell whether it is sustainable or wise policy.

This commentary originally appeared on Nikkei Asia on February 6, 2021. Commentary gives RAND researchers a platform to convey insights based on their professional expertise and often on their peer-reviewed research and analysis.