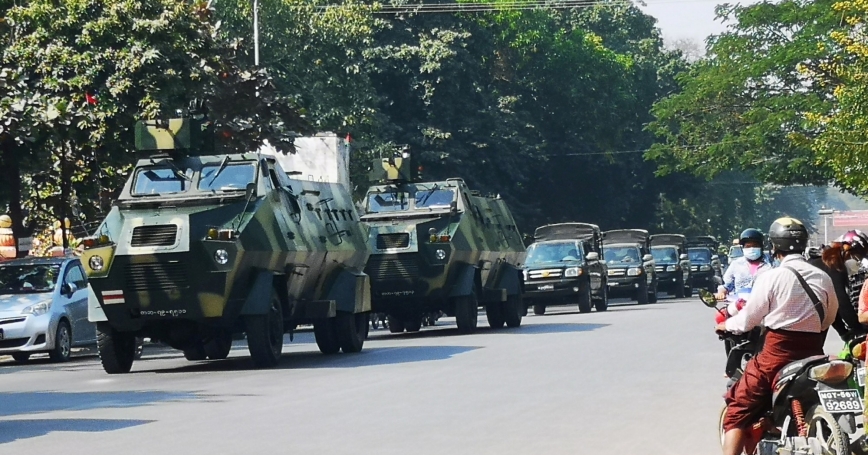 Myanmar Army armored vehicles drive along a street after they seized power in a coup in Mandalay, February 2, 2021

The army arrested Aung San Suu Kyi, along with most of the top officials in her party and many other citizens throughout the country. The U.S. response will be seen by many as an early indication of the new administration's priorities: How will it balance the competing demands of support for democracy and practice of realpolitik?

There are no easy solutions, and this first test will be widely seen as a template for other thorny situations in the future. In crafting a response to the coup in Myanmar, the administration would be well advised to take account of five basic truths.

This is not part of a grand contest between the West and China, nor an ideological struggle between democracy and authoritarianism. Myanmar's military, the Tatmadaw, acted for its own internal reasons, most of which are not related to geopolitics.

To the extent that external countries have influence in Myanmar, China is by far the most important player. The United States may not even be second: Japan, Thailand, South Korea, India, Singapore, and several European nations all have more significant economic, military, and diplomatic engagement.

The symbolism of the United States resonates in Myanmar, as it does across the world. After the Tatmadaw's affiliated political party lost a key election in November, it spent two months floating baseless charges of “election fraud” as preemptive justification for its coup. Sound familiar?

This isn't the first time that language of U.S. leaders may have been appropriated by political figures in Myanmar to disastrous ends. Since 2017, about 740,000 Rohingyas have been forcibly displaced following several years of harsh anti-Muslim rhetoric on Facebook and elsewhere in Myanmar (including spurious linkages to al Qaeda) that precisely echoed the words of some American policymakers in the post-9/11 period.

Aung San Suu Kyi's party, the National League of Democracy (NLD), won 80 percent of the seats in Myanmar's 2015 election, and 83 percent in the November 2020 contest.

It has overwhelming support among the ethnic Bamar majority—but the NLD never truly represented the ethnic and religious minorities who make up one-third of Myanmar's 51 million citizens.

Aung San Suu Kyi went from being an international heroine, and recipient of the 1991 Nobel Peace Prize, to global pariah after staunchly supporting the violent repression of the Rohingyas. Whatever solution the world community tries to advance for Myanmar, it should be predicated on support for democracy writ large, rather than personalized in support for Suu Kyi.

4. Go to Bed with Dictators, and You'll Wake Up on the Floor

Sidestepping international criticism for not labeling Myanmar's mistreatment of the Rohingya as genocide, Suu Kyi tried to assuage the Tatmadaw by using her Nobel credibility to present their case before the International Court of Justice at the Hague.

The United States and other nations also tried to court Myanmar's junta by precipitously dropping economic sanctions in 2016. The Tatmadaw pocketed the concessions, and then did as it pleased. It will very likely do the same next time.

5. The Outside World Has Few Tools to Use—but It Should Use What It Has

Sanctions are unlikely to force a reversal of the coup, but that doesn't mean they'll have no impact. After its prior coup in 1990, the military endured sanctions for two decades before releasing Suu Kyi from house arrest and agreeing to hold elections.

Contrary to some Western analysis, the Tatmadaw remains highly suspicious of China and is eager to break free of dominance by its overweening neighbor.

Moreover, the opening up of Myanmar since 2011 has unleashed popular engagement with the outside world that will be difficult for the Tatmadaw to control: The streets of Yangon and most other cities changed relatively little between the nation's independence (1947), its first coup (1962), and the start of the current democratic experiment a decade ago. But those same streets look very different today. If the Tatmadaw wants to maintain military rule, it will have to resort to increasingly severe levels of repression: It won't be able to count on a populace that has never known anything different.

Sanctions are unlikely to force a reversal of the coup, but that doesn't mean they'll have no impact.

Beyond Myanmar, sanctions send a message to the rest of the world: Violations of global norms will have consequences. Under the Trump administration, the United States used its economic leverage to advance intentionally narrow self-interested aims. Application of carefully targeted sanctions in response to the coup in Myanmar could represent a break from that use of American power.

The Tatmadaw has presented the world with a fait accompli, and gambled that no nation will do much more than issue an expression of concern. How President Biden responds will be watched closely, by friend and foe alike.

There is no quick path to policy success. But a tough-minded approach in support of democracy and human rights—an approach forged and carried out by a truly global coalition acting in concert—could lay down an important marker. Such a firm, multilateral approach might have the greatest chance of achieving progress in Myanmar itself, and may help deter others from thinking that such blatant violations of universal standards are cost-free.

Jonah Blank is a senior political scientist specializing in Asia policy at the nonprofit, nonpartisan RAND Corporation. He is the author of “Mullahs on the Mainframe” and “Arrow of the Blue-Skinned God.”

This commentary originally appeared on Newsweek on February 9, 2021. Commentary gives RAND researchers a platform to convey insights based on their professional expertise and often on their peer-reviewed research and analysis.