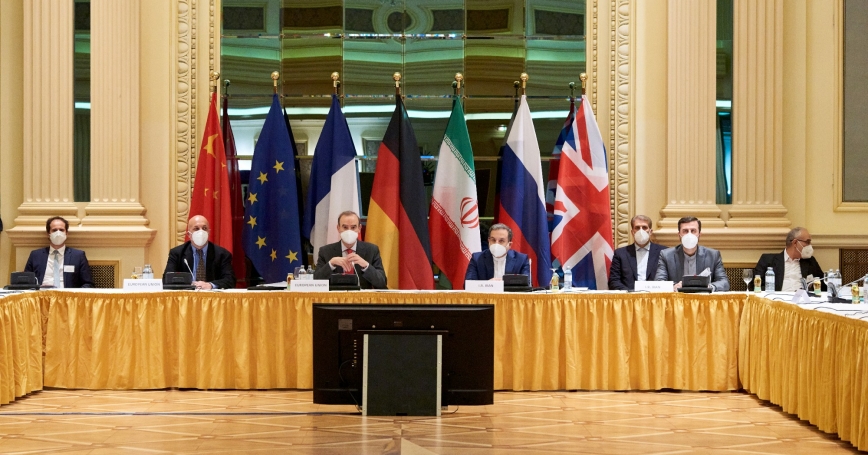 Photo by EU Delegation in Vienna/Handout via Reuters

With Iranian officials vowing revenge, what does this mean for the nascent nuclear talks that began in Vienna last week? The attack is likely to complicate nuclear diplomacy, further erode trust between Tehran and Washington, and may only incentivize Iran to advance its program. As Washington moves to negotiate over returning to the Joint Comprehensive Plan of Action or JCPOA—the 2015 Iran nuclear deal to constrain Iran's nuclear program—Israel perceives real incentives to keep up the pressure on Tehran and slow-roll the revival of a deal it opposes.

Israeli-Iranian military conflict has been emerging from the shadows for several years. Reports suggest that Israel opened a maritime front in 2019, with several attacks on Iranian ships, expanding an already robust Israeli land and air campaign against Iranian targets. In February, Israel blamed Iran for a mine blast on an Israeli commercial shipping carrier off the Gulf of Oman, while Israel claimed responsibility for a subsequent attack off the coast of Yemen on an Iranian cargo ship believed to be associated with Iran's Revolutionary Guard.

The Trump administration's killing of Iran's Gen. Qasem Soleimani in January 2020 also set off a new wave of escalation last spring, including an attempted Iranian cyberattack against an Israeli water system and an Israeli counterattack on an Iranian port. Attacks on Iran's nuclear program have spiked over the past year, including an explosion at the same Natanz facility last July and the assassination of a top Iranian nuclear scientist last November.

Both Israel and Iran may believe they can control the escalation to avoid a full-scale war; both sides in the past have avoided public attribution to maintain a level of deniability and decrease the pressure on the other side to respond. That facade of deniability is now crumbling as Israel becomes more overt about its operations against Iran, increasing the risks of escalation by almost inviting an Iranian response.

Israel recognizes Iran as domestically vulnerable, facing a twin economic and pandemic crisis that may reduce Iran's capacity to retaliate. Indeed, Iran's retaliation to date for previous Israeli attacks, both within and outside the country, has been limited, probably increasing Israeli confidence that it can continue to strike Iran with manageable consequences. Israel may calculate that Iran's freedom of action is further constrained by the nuclear negotiations in Vienna, which hold out the prospects for critical economic relief.

These Israeli attacks are part of a wider Israeli campaign, termed its “Octopus” doctrine by Israeli politician Naftali Bennett, to target Iran directly, not just Iranian proxies like Hezbollah. This has led to an expansion of Israel's “campaign between the wars,” originally designed to prevent an Iranian foothold in Syria but extending now to strikes on Iranian shipments in the Mediterranean and Red Sea.

Israel has also shown that it's willing to strike directly within Iran itself. While sabotage of nuclear sites and assassinations of nuclear scientists are not new Israeli methods, today they are taking place in the context of this broader Israeli-Iranian escalation. This may make such attacks more frequent, as the opportunities and incentives for each side to attack the other in multiple domains and throughout the region increases.

Regardless of how the Israeli coalition talks unfold, we can expect continued Israeli opposition to the Iran nuclear agreement and support for continued pressure against Iran.

Some speculate that the Natanz incident is just the latest gambit from Prime Minister Benjamin Netanyahu to maintain power after last month's deadlocked Israeli election, and that a new Israeli leader may rein in the conflict. That's unlikely. Regardless of how the Israeli coalition talks unfold, we can expect continued Israeli opposition to the Iran nuclear agreement and support for continued pressure against Iran.

Netanyahu may be the most public opponent of the JCPOA and diplomacy with Iran, but the confrontational approach to Iran is widely accepted across the Israeli political spectrum. The Trump administration's withdrawal from the JCPOA in 2018 put an end to previous debates within Israel about the value of the agreement. The Israeli establishment enthusiastically welcomed Trump's “maximum pressure” approach.

President Biden had long advocated for a U.S. return to the JCPOA, and some voices in Israel criticized Netanyahu's strident opposition and argued in favor of renewed diplomacy with Iran. But such arguments from former officials do not reflect the prevailing views of current Israeli officials.

With growing concerns over Iranian missile development and sunset clauses in the original deal five years closer, even prominent former Israeli officials who once supported the JCPOA argue against a U.S. return to the original agreement. Israeli Defense Minister Benny Gantz told his U.S. counterpart Defense Secretary Lloyd Austin on his first official visit to Israel this week that the “old agreement was not a good enough agreement.”

These Attacks Are Likely to Continue

Israel faces few constraints from the United States or other global and regional powers to curb its attacks on Iran. Even Russia has largely acquiesced to continued Israeli strikes against Iran and Iranian-aligned groups in Syria. And the normalization accords between Israel and the United Arab Emirates and Bahrain may leave Israeli leaders more confident that Gulf Arab states are also on Israel's side when it comes to Iran.

During the Trump administration, Israel had a green light for attacks on Iran—some reports even suggest that the United States and Israel coordinated covert actions against its nuclear program. It's unlikely that the Biden administration would support such attacks during such a sensitive time in nuclear negotiations. While U.S. officials are attempting to manage potential differences with Israel quietly through high-level strategic dialogue, it remains unclear whether the Biden administration has the desire or ability to prevent continued Israeli actions against Iran's nuclear program.

Israeli-Iranian tensions are therefore unlikely to de-escalate in the months ahead. The most urgent question is whether such attacks will make successful nuclear diplomacy impossible.

Dalia Dassa Kaye is a senior political scientist at the RAND Corporation. She is also a Wilson Center fellow and coauthor of “Reimagining U.S. Strategy in the Middle East.”

This commentary originally appeared on The Washington Post Monkey Cage Blog on April 13, 2021. Commentary gives RAND researchers a platform to convey insights based on their professional expertise and often on their peer-reviewed research and analysis.