China Has Lost the Philippines Despite Duterte's Best Efforts 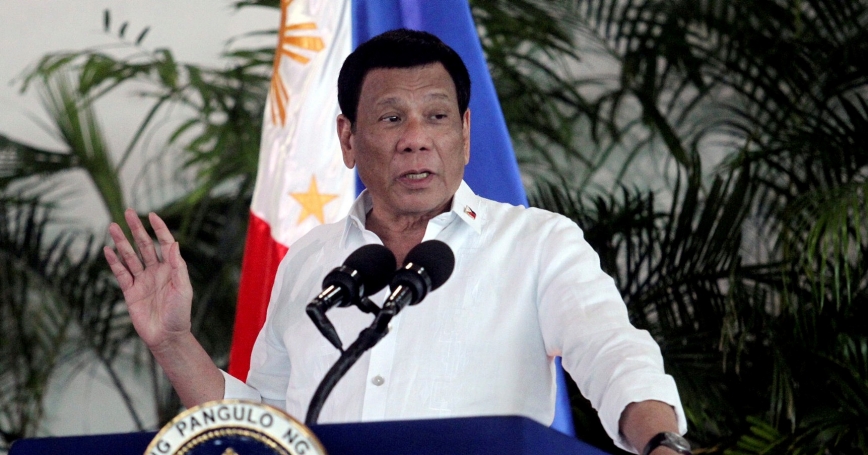 Since his election in 2016, Philippine President Rodrigo Duterte has time and again underscored his anti-U.S. and pro-Chinese orientation. On his first trip to Beijing in 2016, he announced it was “time to say goodbye to Washington”—much to the delight of his host, Chinese President Xi Jinping. He has welcomed Chinese Belt and Road Initiative investments, has threatened to suspend joint military exercises with the United States, and calls China “a good friend.”

But in the course of a year, Duterte appears to have done an about-face on China, frustrating Beijing's attempts to pull Manila out of Washington's strategic orbit. On Sunday, Philippine Secretary of Foreign Affairs Teodoro Locsin Jr. unleashed an expletive-laced tweet on Beijing, telling it in no uncertain terms to to get out of the South China Sea, where the two countries have been embroiled in a dispute. “You're like an ugly oaf forcing your attentions on a handsome guy who wants to be a friend; not to father a Chinese province,” he wrote.

Locsin's Twitter storm is only the latest indication that Beijing's rising assertiveness—especially its challenge to the Philippines's internationally recognized maritime claims—has finally forced Manila's hand. Duterte now recognizes, in spite of his continued rhetoric to the contrary, that China is no friend, and the Philippines needs its long-standing security ally—the United States—after all.

Duterte's realization will have significant geostrategic implications between now and the end of his term in June 2022, when the Philippine Constitution requires him to step down.

Duterte now recognizes, in spite of his continued rhetoric to the contrary, that China is no friend.

Duterte's ire with Washington peaked on February 11, 2020, when he decided to terminate the U.S.-Philippines Visiting Forces Agreement (VFA). Among other things, the VFA enables U.S. troops to seamlessly deploy to the Philippines to address potential contingencies, including against China. According to the VFA's rules, the agreement remains in effect for 180 days after an announced intention by either side to cancel it, allowing time for renegotiation. Since terminating the VFA, Duterte authorized two temporary extensions—in June and again in November 2020—that essentially restarted the clock on the termination process.

Last June, Locsin first signaled Manila's shifting attitudes, arguing that “in a time of pandemic and heightened superpower tensions,” it would be wise to keep the VFA in place. Then, on July 12, 2020—the fourth anniversary of the 2016 ruling by the Permanent Court of Arbitration in The Hague that rejected Beijing's claims to the disputed waters—the Philippine Department of Foreign Affairs finally acknowledged the ruling publicly. The Duterte administration had previously avoided being so explicit to preserve positive ties with China.

Duterte's September 23, 2020 speech at the United Nations General Assembly was another indication he had turned the corner on China. He directly addressed the issue of South China Sea disputes by noting the 2016 ruling was “beyond compromise,” adding “we firmly reject attempts to undermine it.” It was the most direct confrontation with Beijing Duterte ever risked, and it showed his position against China was hardening.

The shift back to the U.S. camp logically followed from there. On November 11, 2020, Locsin cited great-power competition in the South China Sea as a reason for suspending VFA termination. Making this connection clearly implied Manila trusts and sides with Washington—Locsin highlighted the traditional ally's “clarity and strength”—rather than Beijing, not least because of the latter's aggressively expansionary regional stance. Locsin further stated the suspension of termination would “enable us to find a more enhanced, mutually beneficial, and more effective and lasting arrangement on how to move forward in our mutual defense.”

With Locsin's statement, the strategic shift was all but sealed. Duterte, too, implicitly endorsed the VFA while on an inspection tour at Clark Air Base northwest of Manila on February 12. The “exigency of the moment requires [the U.S.] presence here,” he said. “I am okay with that.”

In another important development on March 2, Manila inked a deal with India to procure the BrahMos supersonic cruise missile—a deal that is hard to envision without Duterte's personal approval. The BrahMos system, jointly built by India and Russia, would provide Manila with its first deterrent capability against China. When asked earlier about the possibility of acquisition, the Philippine Department of National Defense responded it was part of a modernization program “to enhance our territorial defense capability.”

Duterte's final escalation came on April 19, when he threatened China with military action in the South China Sea: “I will send my gray ships there to stake a claim.” This followed an incident earlier that month when an armed Chinese navy ship chased away a Philippine vessel carrying a television news team.

To be sure, Duterte likely still holds out hope that Manila can maintain peaceful ties with Beijing. He is particularly interested in receiving infrastructure and investment assistance through China's Belt and Road Initiative. However, rising Chinese assertiveness since the start of his presidency and intensification of it over the last two years have finally compelled Duterte to publicly recognize that not only is Beijing a problem but Washington is a valuable ally to have in his corner to handle it.

Beijing has only itself to blame if it has lost the opportunity to pull the Philippines out of the U.S. orbit. China's aggressive behavior in the South China Sea has made it virtually impossible for Duterte to push his pro-China and anti-U.S. agenda. For example, starting in early 2019 through early 2020, China encircled Thitu Island, one of the largest Philippine-controlled Spratly Islands that China claims, with coast guard and fishing militia boats, totaling hundreds of vessels over the course of the year. In February 2020, only days after Duterte cancelled the VFA, a Chinese navy ship—in what the Philippine military called “a hostile act”—targeted a Philippine navy ship that had been patrolling disputed seas. In April 2020, Beijing officially declared the establishment of administrative control over the disputed islands.

That same month, Beijing redeployed the Haiyang Dizhi 8 geological survey vessel with coast guard escorts into Vietnam's exclusive economic zone and did the same against Malaysia in May 2020 to harass West Capella, a drill ship exploring for oil and gas in disputed waters. The actions underscored that no Southeast Asian neighbor is safe from China's growing assertiveness.

China has refused to let up this year. In January, China passed a new coast guard law that authorized firing on rival ships. In early March, Beijing's decision to deploy its fishing militia to the disputed Whitsun Reef in the Spratly Islands resulted in months-long Chinese-Philippine tensions, which included the incident involving a Chinese navy ship chasing a Philippine vessel with a news crew aboard. Tensions have only recently begun to subside with the departure of Chinese fishing boats.

Beijing's destabilizing activities in the South China Sea have prompted Duterte to allow Locsin to submit numerous diplomatic notes in protest. Duterte has also yielded to Philippine Secretary of National Defense Delfin Lorenzana's calls to maintain close ties with the U.S. military through combined training operations, such as the annual Balikatan exercise, and to reaffirm the importance of the alliance. Indeed, both ministers were in close and regular contact with their counterparts in Washington, U.S. Secretary of State Antony Blinken and U.S. Defense Secretary Lloyd Austin, throughout the Whitsun Reef saga.

Moreover, Beijing's growing assertiveness has only made it more difficult for Duterte to overcome pervasive anti-Chinese sentiment among his own country's population. Nor has he been able to assuage the concerns of the staunchly pro-U.S. Philippine defense establishment, which sees China as Manila's top threat. Politically, Philippine Senate members are angry with Duterte's policy of refusing to stand up to China and his blatant disregard for the country's traditional alliance with the United States.

It is likely that between now and the inauguration of his successor, Duterte will adopt a slightly tougher line on China.

Duterte now has little room left to maneuver. China's aggressive approach to the South China Sea has severely undermined the credibility of his pro-China policies. Therefore, it is likely that between now and the inauguration of his successor, Duterte will adopt a slightly tougher line on China—even if he still refers to Beijing as “a good friend”—and avoid implementing any new pro-China programs. For example, he is unlikely to pursue his long-standing plan for joint oil and gas exploration with Beijing in disputed waters.

To be sure, Duterte's own instincts, high approval ratings, and lame-duck status probably mean he won't plan a wholesale embrace of the United States. On the contrary, he is very unlikely to stop criticizing the United States because he remains, at his core, anti-U.S. That said, China has left Duterte little choice but to keep inching closer to Washington. To that end, it is likely the United States and the Philippines will reach an agreement on the new VFA soon. Atmospherics aside, Duterte is becoming less of a headache for Washington and more of one for Beijing—and that is a good thing for U.S. strategy in the Indo-Pacific.

Derek Grossman is a senior defense analyst at the RAND Corporation and a former daily intelligence briefer to the U.S. assistant secretary of defense for Asian and Pacific security affairs.

This commentary originally appeared on Foreign Policy on May 3, 2021. Commentary gives RAND researchers a platform to convey insights based on their professional expertise and often on their peer-reviewed research and analysis.