It's Time to Drop 'Competition' in the National Defense Strategy 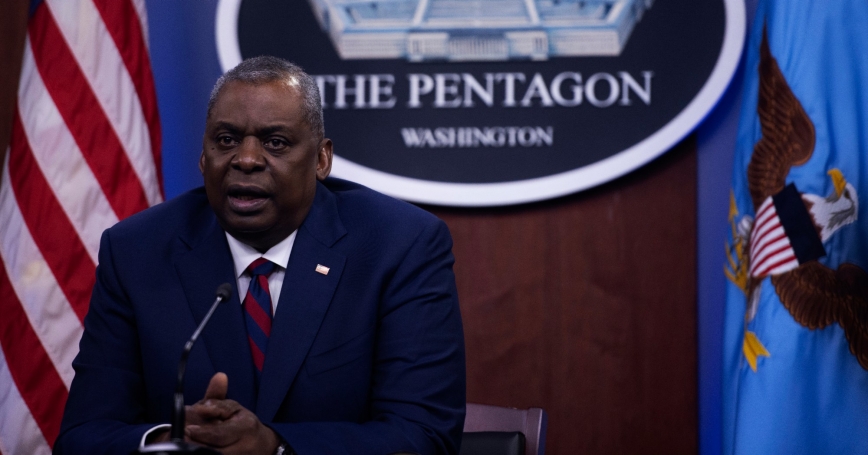 U.S. Secretary of Defense Lloyd J. Austin III during a virtual meeting at the Pentagon, in Washington, D.C., May 5, 2021

Strategists love buzzwords. Ever since the 2018 National Defense Strategy proclaimed (PDF) that “Inter-state strategic competition, not terrorism, is now the primary concern in U.S. national security,” there has been no trendier term in defense policy circles than “competition.” It has been the subject of any number of white papers (PDF), memorandums, and public statements. The term ran through President Biden's first address to Congress. The Biden administration's recently published Interim Strategic Guidance's objective (PDF) is to “prevail in strategic competition with China or any other nation.”

And on one level, there is good reason for the term's popularity. The United States is battling for influence with China and Russia across many parts of the globe. But while “interstate strategic competition” may be an accurate description of the international environment, it may not make for good defense strategy.

Interstate competition conjures up images of sports matches or economic markets. Those competitions, however, are bound by rules, policed by referees and ultimately produce winners and losers. Geopolitical competition, by contrast, lacks such clarity. There is no beginning, middle, or end, no rules and no referees. To the extent international relations theorists talk about competition, they use the term abstractly to describe how states continuously jockey with their peers for prestige, power, and security.

Strategies, however, need to be tangible and prescriptive, rather than nebulous and descriptive. They offer a vision for what the Department of Defense hopes to achieve, and what it should and, just as importantly, what it should not do in pursuit of those objectives. Competition, as a goal, provides none of these attributes. While it specifies who the United States should compete with (namely China and to a lesser extent Russia), the where, how, and why are left open-ended. Above all, competition is a means not an end. As such, it fails to describe what the United States wants to accomplish. After all, China and Russia are large, powerful countries, and no matter what the U.S. military does during peacetime, this will not change.

Focusing on competition inhibits hard but necessary choices about where the Defense Department should dedicate its resources.

Partly because the term is so ill-defined, focusing on competition inhibits hard but necessary choices about where the Defense Department should dedicate its resources. China and Russia are global powers, with presence in some form or another in almost every corner of world. But not all this influence is equally threatening to American national security. With defense spending mostly flat-lining or getting leaner in the wake of the COVID-19 pandemic, the Department of Defense might be wise to prioritize theaters and resources. Nebulous mandates to “compete” add little clarity about where the department's attention should be.

Beyond just the expansive geographical scope, competition invites mission creep. Partly because competition has no set tasks, the Department of Defense has interpreted competition as everything short of actual conflict. Some of these tasks—like deterring Chinese and Russian aggression—fall squarely in the military lane, but others arguably are better suited to other parts of the U.S. government. For example, State Department, USAID, and civil society organizations may be better at countering Chinese Belt and Road investments, negating Russian influence operations or exposing both powers' attempts at political subversion. In this sense, directing the military to compete undermines the Biden administration's pledge (PDF) to “elevat[e] diplomacy as our tool of first resort.”

What then should the Defense Department do during peacetime if not competing with China and Russia? Simply put, it should prepare to win the next war, while defeating any military aggression below the threshold of conflict. Full stop. This basic imperative should guide what capabilities Joint Force develops, what training it conducts, where it looks to gain access, how it operates, and with whom the United States develops military relationships.

Reorienting the Department of Defense's mission away from competition back to warfighting focuses the department on its core expertise—the military tool of influence. It also narrows the geographic scope. While Chinese and Russian influence may span the globe, the likely locations for future great power wars are more limited. Even with narrowing the scope, these tasks are daunting challenges and not easily solved.

At the same time, by limiting the Defense Department's mandate, it may renew the emphasis on the other parts of the United States' foreign policy apparatus. A “whole of government approach,” perhaps, is an only marginally less popular catchphrase than “competition” in strategy documents. Whether such slogans reflect policy reality, however, is a matter of debate. State Department officials, for example, often complain that they routinely lose out to the larger, better-funded Department of Defense in bureaucratic turf fights. Clearly defining what aspects of confronting China and Russia fall to the Department of Defense and which ones fall to other agencies provide a first step in developing a comprehensive strategy.

By developing credible military options, the United States may be able to deter [China and Russia] from using force to change the status quo.

Above all, if the United States military focuses on preparing for the next war, then it may also accomplish what Secretary of Defense Lloyd Austin calls the cornerstone of America's defense—ensuring that it never has to fight one. The United States may never see eye-to-eye with China on the sovereignty of the South China Sea or with Russia on European security. By developing credible military options, however, the United States may be able to deter both powers from using force to change the status quo.

No matter what the Biden administration says in its next defense strategy, interstate competition will be a reality. Recognizing this geopolitical backdrop, however, is different than tasking the Defense Department to compete. Combatting the military threat posed by China and Russia will require the Department of Defense's full concentration, especially in an era of more constrained resources. Dropping “competition” from the next defense strategy would be a good place to start.

Raphael S. Cohen, a former active-duty Army officer, is a senior political scientist and the acting director of the Strategy and Doctrine Program, Project AIR FORCE at the nonprofit, nonpartisan RAND Corporation.

This commentary originally appeared on The Hill on May 17, 2021. Commentary gives RAND researchers a platform to convey insights based on their professional expertise and often on their peer-reviewed research and analysis.