Micromobility: How Will We Know When It's Working? 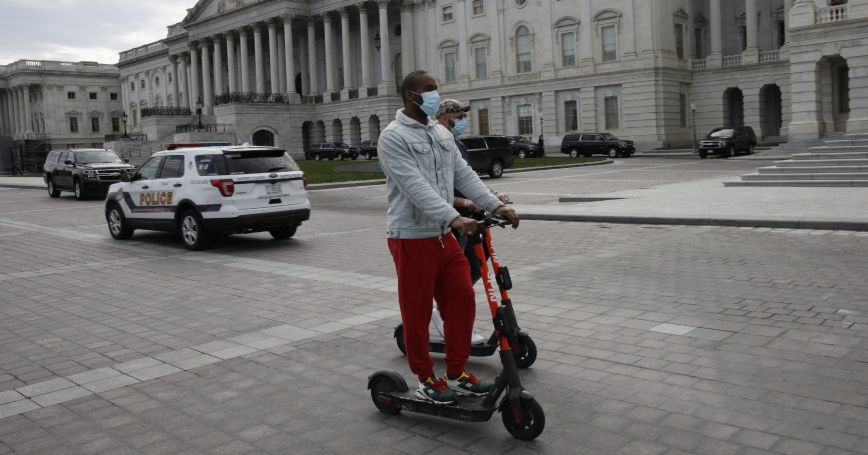 Photo by Gripas Yuri/ABACA via Reuters

by Liisa Ecola and Laura Fraade-Blanar

A few years ago, it seemed like the micromobility revolution had finally arrived. These shared modes—bike-sharing services, whether docked or dockless, pedaled or electric, along with e-scooter sharing—were poised to upend urban transportation by making it convenient and cheap to get around. Micromobility was positioned as a complement to transit services by addressing the “last-mile” problem, a boon to active transportation by providing options for trips that were a little too long to walk, and a solution for every urban problem from traffic congestion to air pollution to transit deserts and inequality.

Is there a way to know if micromobility can fulfill these ambitious goals? We suggest looking at answers to nine questions.

Is it widely used? In order for micromobility to accomplish anything, people have to use it. Until 2019, usage was increasing, reaching a high of 136 million trips. Unsurprisingly, that number decreased in 2020 as trips overall and especially trips on shared vehicles decreased. Even at its peak, micromobility represented only a small percentage of overall trips. It is unclear whether this small and now decreasing percentage represents a permanent change in travel preferences.

Is it safe? Vehicle crashes already kill over 36,000 people (PDF) per year in this country, a much higher rate compared to other countries. Micromobility should not add any new deaths to this horribly high toll, especially as pedestrian and cyclist deaths have increased over the past five years. Micromobility should not contribute to the burden of crashes and deaths, which involves some combination of protected lanes, education on safe riding and driving, and possibly limiting travel speeds.

In order for micromobility to accomplish anything, people have to use it.

Is it widely available? Micromobility modes are based on convenience. Prospective users should be able to reach a vehicle within a few blocks, or it defeats the purpose of serving short local trips. For undocked modes, this means efforts to ensure that vehicles are distributed throughout a city or service area with sufficient density, while combating vehicle hoarding. For docked modes, this means placing docks equitably around an area, perhaps such that potential riders would not have to walk more than two or three blocks to a vehicle.

Is it working for riders without creating new problems for other modes? One critique of dockless modes is that vehicles often end up in places they shouldn't—tossed on rail lines or blocking sidewalks. People also ride them in places they shouldn't (e.g., bike lanes or on sidewalks), although where they should be ridden remains an open question. New modes should not create major inconveniences or safety hazards for users of existing modes. Perhaps not all micromobility modes are a good fit for all environments, and companies could create mechanisms for enforcement of their rules about where to park vehicles.

Are people switching from car trips? Ideally, micromobility could replace individual car trips rather than walking or public transit trips. However, it's not clear that this is the main pattern. Some studies have found a small but measurable reduction in car ownership and driving when a new bikeshare station opened, others have found mixed results on congestion and car use.

Is it affordable? Micromobility is much cheaper than other modes, with average cost per ride ranging from $1.25 and $3.50. This should be an excellent option for lower-income riders, yet micromobility providers tend to find their riders are on the affluent side. One barrier might be that membership and one-time use generally requires credit cards, which many lower-income households lack. In 2019, more than 25 percent of households did not have credit cards (PDF).

Is it accessible? Similarly, business models generally require smartphones, or assume that users can download and use their apps. Lower-income households and older individuals are less likely to have access to smartphones; almost one-third of low-income adults do not have a smartphone. Even if a potential user owns a smartphone, they may not be comfortable or familiar with installing and using paid apps.

Is it well-maintained? Shared use vehicles can take quite a beating. If vehicles are not routinely maintained and repaired as needed, the system can become less useful over time, with riders slipping away because they have had too many bad experiences.

These questions could represent a checklist—specific issues that may help define whether micromobility is doing what its proponents said it would do. Companies, cities, and users might consider using this checklist to think through operational issues in a particular context, compare implementation options, develop and evaluate a pilot program, monitor use, and assess expansion plans. Answers may vary from place to place, but these questions could show how micromobility can work best in a specific location.

Liisa Ecola is a senior policy analyst and Laura Fraade-Blanar is an associate policy researcher at the nonprofit, nonpartisan RAND Corporation.