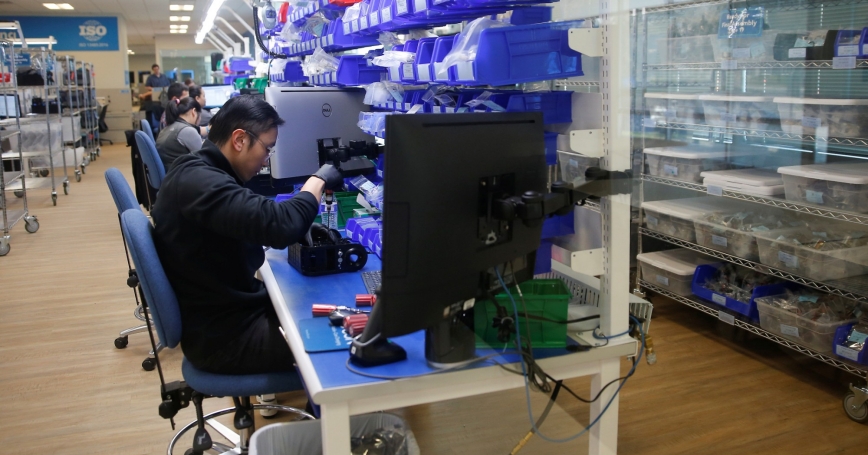 An employee works on final assembly of ventilators at Ventec Life Systems, in Bothell, Washington, March 18, 2020

National power relies on globally efficient and intertwined supply chains. These highly interconnected supply chains are a fact of life, bringing benefit and vulnerability. Supply chain vulnerability stretches across whole sectors of the U.S. economy and is a national security issue in that sense: a set of interests that if disrupted could directly affect the health and well-being of the United State and its allies.

The response to COVID-19 was an example of a supply chain crisis in medical equipment and support infrastructure that involved no malign actors at all, simply a disease that impacted supply chains across the world in multiple ways. The rapid development of COVID-19 vaccines stands as a remarkable scientific and medical achievement, but the overall response to the pandemic faced supply chain challenges, even in the absence of a competitor bent on creating and exploiting supply chain vulnerability.

What was particularly telling is that in many cases no one understood the origin of commodities within the supply chain and thus the pandemic's impact. As a result, the nation was faced with such unexpected dilemmas as shortages of nasal swabs or chemicals for testing kits. Not knowing where all the things for a product are made is not a problem for most users. If supplies move freely and production moves toward the places where these parts can be made at least expense, for the most part this is simply accepted as an efficient relationship. However, whether a crisis is man-made or externally imposed, not knowing the origins of materials can become a serious problem when normal flows cease.

Whether a crisis is man-made or externally imposed, not knowing the origins of materials can become a serious problem when normal flows cease.

Ventilators provide an excellent example of the impact of not knowing the origin of key components. In February 2020, as far as the U.S. medical and public health establishment knew, there was a sufficient supply of ventilators. The outbreak of COVID-19 and the resulting explosion of demand for ventilators to care for critically ill patients was neither anticipated nor planned for. Demand went up 500–700%, and the shortage of ventilators was dire.

The Trump administration did view this as a national problem and did use the Defense Production Act to allow priority use of industrial facilities. But, the problem did not lie in factory capacity but in the shortage of components to put the ventilators together in the available factories. Components such as filters and alarms and tubing and power supplies were produced in different countries world-wide, with indeed some produced in the Wuhan District of the People's Republic of China, which was largely shut down due to COVID-19. With no effort by any malign actor to undermine supply chains, supply chains across the world were being disrupted, with risk imposed on all countries, including the United States.

As the number of critically ill patients increased, it became clear that the nation's supply of intensive care units, and its supply of people to staff them, was insufficient. Surge facilities were constructed, but then the issue became the lack of trained personnel to staff the expanded facilities. This is analogous to military examples where a given supply of some commodity or force might be sufficient in steady state but was not so in a time of crisis. The nation's medical infrastructure is oriented toward meeting the steady state demand, not more stressing cases.

Serious vulnerabilities exist, but the full dimensions of that vulnerability were not known prior to the pandemic in some key sectors, and are not known today in many others.

Fortunately, the United States was able to overcome the supply challenges that were presented during the pandemic. But, all these disruptions were the result of an unusual situation, which highlighted several deep vulnerabilities, rather than some actor trying to manipulate chains. Factor in possible actions by a competitor bent on exerting influence and the problems may prove difficult indeed. The People's Republic of China (PRC) is deeply embedded in multiple supply chains, becoming the largest trading nation and “the world's workshop,” including provision of medical supplies and equipment. Its ability to manipulate supply chains could allow it to use influence against the vulnerabilities that the COVID-19 response demonstrated.

The many shortages that occurred during the COVID-19 pandemic in the United States and elsewhere provide a clear warning. Serious vulnerabilities exist, but the full dimensions of that vulnerability were not known prior to the pandemic in some key sectors, and are not known today in many others. Much more needs to be known about this potential threat to national security.

Bradley Martin is the director of the RAND National Security Supply Chain Institute, and a senior policy researcher at the nonprofit, nonpartisan RAND Corporation.