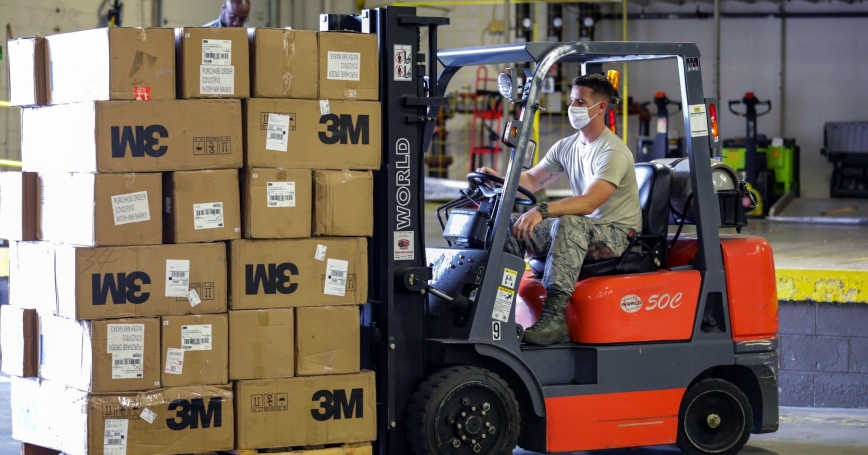 The National Security Supply Chain Institute seeks a broader definition of national security than is often employed. But, even within the narrow confines of military operational logistics, there may be some very good reasons to be concerned.

The supply chain for joint operations serves a joint force. However, military services, geographic combatant commanders, the Defense Logistics Agency (DLA), and other combat support agencies make independent decisions about the purchase and positioning of spares and ordnance. All these organizations have different responsibilities and incentives. These incentives drive behavior that makes individual sense for the organizations, but might not result in overall effectiveness in supporting the needs of operating forces.

Due largely to the unprecedented level of dominance and freedom of action the United States possessed after the Cold War, logistics planners moved away from a focus on effectiveness to a focus on efficiency, in the sense that little is left idle for significant periods and that commodities are delivered at minimum cost. This is not to say that efficiency is not a worthy goal, just that it relies very heavily on measurements of current activity. This has meant that such factors as planning for attrition or dispersion or consideration of resupply points became matters of cost, with a bias toward “just in time” delivery that is simply not executable in the world as it has evolved.

If evaluated solely against meeting steady-state demand, the military operational supply chain works as it should. The problem is not performance relative to incentives. Rather, the problem is that the existing guidance does not lead the system to conduct analyses and make decisions needed to support the highly demanding combat operations likely in a conflict with a major power. As a result, the ability of this system to properly support the joint force in the event of major conflict is at best untested and could be highly problematic.

The nation’s industrial base has shifted in ways that make resupply of some key components highly questionable during periods of crisis and heightened operational tempo.

Distribution is not, however, the area of greatest concern when we discuss defense-related supply chains. The Department of Defense has begun assessing the physical vulnerability of supply chains and is taking effort to mitigate the problems. However, the larger problem is that the nation’s industrial base has shifted in ways that make resupply of some key components highly questionable during periods of crisis and heightened operational tempo, with war being the most radical of these conditions.

Typically, the focus here is on weapon systems and ordnance, and these indeed are items of concern. No other customer exists for these except the U.S. Department of Defense and keeping an adequate industrial base for surge requires what amounts to an outright subsidy. But, industrial base shortfalls and likely shortages in the event of heightened operational tempo extend beyond the specialized world of munitions. Spare parts are another area of concern. Multiple organizations play roles in production, stocking, and ultimate distribution of spare parts.

DLA is the wholesale supplier for most consumable spare parts. Each of the services funds DLA via a working capital fund mechanism to purchase and maintain these stocks. DLA is directed to meet broad steady-state Materiel Availability targets at minimal cost. It has automated inventory algorithms that are set up to make decisions for individual parts based on optimizing against the overall metrics. Thus, DLA has an incentive to invest little in expensive parts that have infrequent demands, even when they are key readiness drivers.

Services can choose to invest in “readiness spares” that are critical even if not in heavy demand, but they must choose to prioritize these over every other demand on their resources. They have as a result a considerable incentive to simply defer purchases in the belief that the shortages can be addressed in wartime. The result is that parts inventory is oriented toward a peace-time steady state rather than the higher operational tempo likely in war time or periods of crisis. There is, however, no particular reason to believe that suppliers will be able to rapidly ramp up production to meet wartime demand. Indeed, the dimensions of demand are not fully understood nor are the capacities of the industrial base.

We, fortunately, do not have multiple examples of the system failing to meet demand, but this is largely because the occasion under which such failure is likely to happen—large-scale conflict against a peer competitor—has not occurred in recent decades. If it were to occur, the system is very likely to encounter significant difficulty in meeting wartime demands, creating risks of successful execution of combat operations.

Bradley Martin is the director of the RAND National Security Supply Chain Institute, and a senior policy researcher at the nonprofit, nonpartisan RAND Corporation.