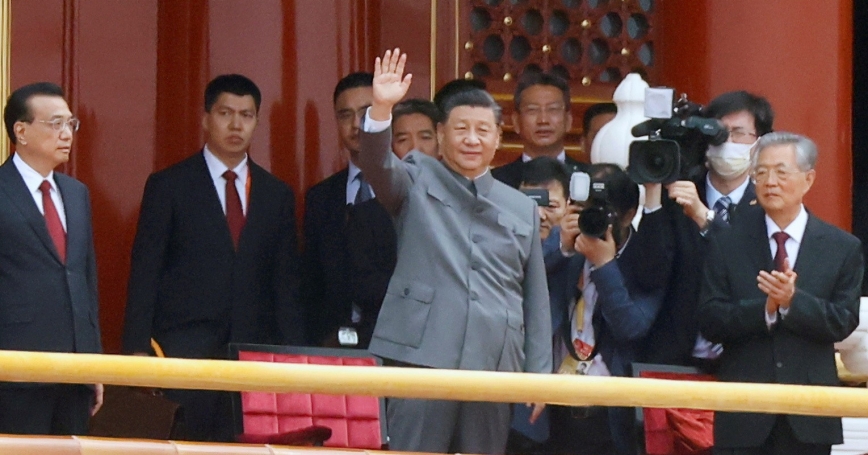 Chinese President Xi Jinping waves at an event marking the 100th founding anniversary of the CCP, in Tiananmen Square, in Beijing, China, July 1, 2021

On July 1, speaking from atop the rostrum at Tiananmen, Xi Jinping commemorated the 100th anniversary of the founding of the Chinese Communist Party (CCP) by laying out a vision of China's future that was by turns self-congratulatory, triumphalist, and aggressive.

Xi lauded the accomplishments of his country of 1.4 billion people, and portrayed the 95 million–member CCP as the only entity that can complete the task of national rejuvenation, warning that any foreign force that attempts to “bully, oppress, or subjugate us…will find (itself) on a collision course with a great wall of steel.”

What can Xi's speech, redolent with imagery of righteous struggle against foreign oppressors, tell us about where China's top leader sees his country's relationship with the world heading?

First, Xi used much of his speech to recast figures from the last two centuries of Chinese history in the service of the party to create an impression of a Chinese nation far more unified than one that ever actually existed in its “5,000” year history. In Xi's retelling, messianic religious movements such as the Taiping Rebellion and the Boxer Rebellion were transformed into patriotic attempts by Chinese society to resist foreign encroachment.

The issues of government repression, opportunity, and religious freedom that motivated these actors are ignored in Xi's ahistorical version of history, however, and such figures are repurposed to serve as heroic, if ultimately failed, forebears of the CCP in seeking to defend China from predatory foreign powers. Were they alive today, the followers of such movements would be considered members of xiejiao, or “evil cults,” and could be arrested and tortured individually, as the members of the Falun Gong have been, or en masse, as in Xinjiang, where China has imprisoned more than one million Uyghurs in concentration camps.

Xi also claimed that the Chinese Communist Party “has no special interests of its own [and] has never represented any individual interest group, power group, or privileged stratum,” a reworking of the party's history breathtaking in its audacity. The party's first decade and a half, in which it served largely as a tool of Soviet influence and foreign policy, was not acknowledged.

Missing too was any acknowledgement of the reality of the first two and a half decades of the People's Republic of China, when the peasantry was encouraged to use violence against the rural landed gentry in pursuit of “land reform,” and when Mao urged the populace to rise up against “capitalist roaders” and tear down China's traditional culture during the “Great Proletarian Cultural Revolution.”

Xi embraced an image of the party as the neutral representative of the national interest, a characterization that would have brought him political trouble during the Mao years.

Instead Xi embraced an image of the party as the neutral representative of the national interest, a characterization that would have brought him political trouble during the Mao years. Since coming to power in 2012, however, Xi has sought to defend the party's hold on power by portraying it as the guardian of a China threatened by hostile foreigners and on the verge of realizing a dream of national greatness, proclaiming in his speech that “we must uphold the leadership of the Party…China's success hinges on the Party.”

Xi then vowed to accelerate the modernization of the People's Liberation Army. He also vowed to advance China's influence globally by building a “community of common destiny for all mankind” through its Belt and Road Initiative and other international outreach efforts, while also vowing to “unite all the sons and daughters of the Chinese nation, both at home and abroad, behind the goal of national rejuvenation.” Both promises signal an ambition to rework global norms, institutions, territorial boundaries, and power balances to suit the party's preferences and to leverage—and if necessary compel—the Chinese diaspora to serve the goals of the CCP.

In short, Xi's speech was likely aimed at forging unity domestically, ensuring the ruling status of “the party forever,” and advancing China's power abroad. Xi's emphasis on nationalism, recovering “lost” territories, and remolding international order suggest that tensions with the United States will continue, as will threats to Taiwan, Japan, India, and other countries whose territories China covets. It also suggests that U.S. policymakers may need to understand how to develop influence in strategic competition with an increasingly assertive China.

Scott W. Harold is a senior political scientist at the nonprofit, nonpartisan RAND Corporation, and an affiliate faculty member at the Pardee RAND Graduate School.

This commentary originally appeared on The Hill on July 6, 2021. Commentary gives RAND researchers a platform to convey insights based on their professional expertise and often on their peer-reviewed research and analysis.