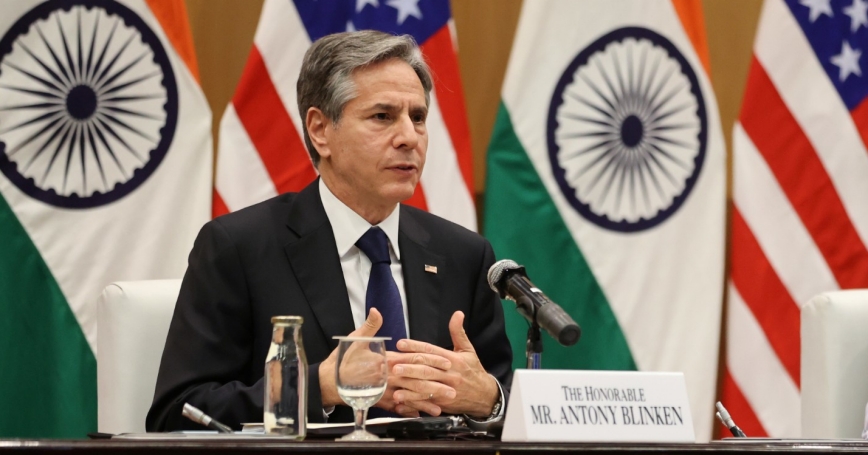 Without an official Indo-Pacific strategy in place, observers are forced to read between the lines to get a better sense of U.S. President Joe Biden's policy toward the region.

To be sure, the Biden administration in March published its Interim National Security Strategic Guidance, which doubles down on the Trump administration's competition with China by strengthening alliances and partnerships. However, the Biden team is yet to detail its goals and how it plans to achieve them.

One could simply wait until early next year when the Biden administration reportedly will publish its first National Security Strategy that will eventually inform a future Indo-Pacific strategy. But following a series of senior-level Biden administration visits to the region and virtual engagements in the last month, at least three key points have already crystallized. Taken together, they offer an emerging blueprint that holds significant implications for the administration's Indo-Pacific policy.

First, as I have discussed in the column “Biden's troubled Southeast Asia policy needs a reboot” published in Nikkei Asia on July 6, the prioritization of shared values—democracy, freedom, and respect for human rights—over shared national interests—namely countering China—raised serious questions about the sustainability of such an approach. This is because authoritarian, semi-authoritarian, and even democratic but increasingly illiberal nations throughout the Indo-Pacific do not appreciate perceived lectures about values and strings-attached cooperation.

The Biden team is now welcoming collaboration with any ally or partner so long as they are willing to genuinely engage on values.

The administration, however, appears to have refined its message lately. Rather than appearing to focus near-exclusively on like-minded democratic countries working together—such as multilaterally through the Quadrilateral Security Dialogue, or Quad, comprising Australia, India, Japan, and the United States—which can be viewed as inherently exclusionary, the Biden team is now welcoming collaboration with any ally or partner so long as they are willing to genuinely engage on values.

Most notably, the administration has reframed the nature of these discussions to focus on how no democracy, including the United States, is perfect, and how all nations must work hard to improve themselves.

Addressing Singapore's International Institute for Strategic Studies in July, Defense Secretary Lloyd Austin offered that “our democratic values are not always easy to reach. And the United States does not always get it right,” adding that “our openness gives us the built-in ability to self-correct…and to strive toward a more perfect union.”

A day later, in New Delhi, Secretary of State Antony Blinken offered similar comments, this time to an India that under Prime Minister Narendra Modi has backslid on liberal values. Instead of chastising, Blinken assured: “We also recognize that every democracy, starting with our own, is a work in progress. And when we discuss these issues, I certainly do it from a starting point of humility.”

The second major point is that the Biden administration, unlike its predecessor, has shifted the policy conversation away from whether U.S. allies and partners will align with Washington against Beijing and toward focusing on challenges of immediate concern to them.

In his Singapore speech, Austin argued “we are not asking countries in the region to choose between the United States and China,” and he described U.S. friendships in Southeast Asia as “bigger than just geopolitics.” Austin instead highlighted American concern over the “the rights and livelihoods” of Southeast Asian nations affected by China.

In early August, Blinken participated in a series of five virtual ASEAN meetings and struck similar chords. Most readouts did not mention China even once and focused on other crosscutting regional challenges like pandemic relief, climate change, human capital development, urbanization, and the coup in Myanmar.

The Biden administration has shifted the policy conversation toward focusing on challenges of immediate concern to allies and partners.

Lastly, while the Biden administration readily acknowledges that the United States is in “extreme competition” against China, this competition ought not spiral out of control. Indeed, in the run-up to her visit to China last month, Deputy Secretary of State Wendy Sherman called for “guardrails” in U.S.-China relations following brutal bilateral talks in Anchorage, Alaska in March, noting that the two nations could cooperate on challenges of common concern such as climate change, North Korea, Afghanistan, counternarcotics, nonproliferation, and others.

Secretary Austin also emphasized in Singapore that he was seeking to establish a crisis hotline with the People's Liberation Army to keep tensions from escalating unchecked. The bottom line is that Washington's extreme competition under the Biden administration no longer appears limitless. Hence, Indo-Pacific residents probably see less risk in great power competition negatively impacting them.

Despite the absence of an official Indo-Pacific strategy, there is much that can already be discerned about the administration's approach to the region. It is clear that the initial emphasis on shared national values has been massaged to better align with shared national interests—particularly to encourage allies and partners to cooperate with the United States against China. Washington is also acknowledging finally the agency that its allies and partners wield, apart from leveraging them to win at great power geopolitics. And the Biden administration, unlike the Trump administration before it, does not seem poised to push U.S.-China ties to the brink.

All of these are positive developments for U.S. strategy in the Indo-Pacific. The Biden administration is demonstrating flexibility, attentiveness, and, perhaps most importantly, pragmatism. It will be telling to see whether U.S. Vice President Kamala Harris' visits this week to Singapore and Vietnam continue this approach.

It will also be telling to see how she handles the apparent contradiction between a values-based approach and the administration's policy in Afghanistan that has resulted in human tragedy. Regardless, after decades of relative neglect to focus on the Middle East, followed by a resurgent interest in the Indo-Pacific by the United States mostly because of China's growing assertiveness, the region is feeling jittery. Thus, a steady and thoughtful hand is very likely to be welcomed.

This commentary originally appeared on Nikkei Asia on August 23, 2021. Commentary gives RAND researchers a platform to convey insights based on their professional expertise and often on their peer-reviewed research and analysis.