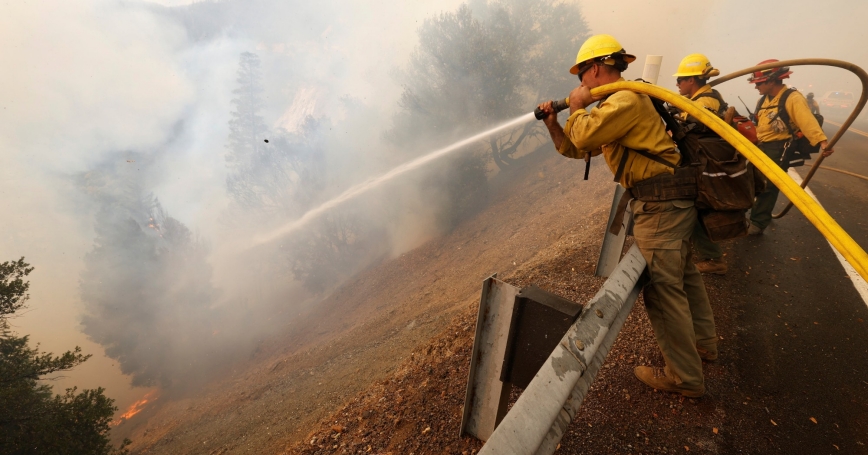 Firefighters knock down hot spots while protecting a rail bridge from the Dixie Fire near the town of Quincy, California, August 5, 2021

The number of “uncontained large fires” around the United States has now reached 100 (PDF), more evidence that America is in the midst of one of the most devastating wildfire seasons on record. These fires have forced evacuations of tens of thousands and burned more than 3.8 million acres. With months left in the season, wildland firefighters are stretched thin, burned out and faced with difficult decisions on all fronts.

In response, the chief of the U.S. Forest Service recently sent out a letter (PDF) calling the current situation a “national crisis” and temporarily restricting the use of prescribed fires and fires for resource benefit. This is not unusual and has happened before during intense fire years. The firefighting resources needed to pull off a complex burn and the stand-by contingency resources in case a prescribed fire escapes are simply not available right now.

What is unusual is the way this has been interpreted and discussed. There have been comments that the letter means full and immediate suppression on all fires or a complete abdication of preventative fuels treatments. That is not what the letter says and even if it did, it would not be possible. Instead, the letter and reaction might be understood as an acknowledgment of the failures of current wildland fire policies and uncertainty about the response to constantly changing conditions that encourage long-duration, larger, and more-intense fires.

Welcome to a new era of wildfire in the American West—and increasingly, in other parts of the world. The fire seasons that have been scorching huge areas and wiping entire towns from the map are not anomalies—they appear to be the future. To meet that future, a response could be based on an understanding that wildfire is not going away, wildfire will be a part of the ecosystem moving forward, and fire management systems should be modernized to meet the moment.

Fire season devastation is broadly a factor of human activity. Part of this is a changing climate. Drought and heatwaves have been wreaking havoc on the West and contribute to the intensity and duration of fires. According to the recent Intergovernmental Panel on Climate Change report, this is only going to get worse in the coming years and decades.

A history of land management has laid the conditions for extreme fire: a lack of investment in thinning and a suppression regime leading to a buildup of fuel for large fires.

While the signature of climate change is becoming stronger each year, it is only one driver of this explosive wildfire season. A history of land management has laid the conditions for extreme fire: a lack of investment in thinning and a suppression regime leading to a buildup of fuel for large fires.

Wildland firefighters are seasonal workers, and many are also responsible for other day-to-day tasks in their organizations beyond fire. Additionally, communities in and adjacent to wildland areas live with only voluntary guidelines on home hardening, few resources for preparedness, and no regulations against building in highly-risky areas. Building in the wildland-urban interface with reckless disregard for fire implications continues, creating expanding bullseyes (PDF) of structures and people living in high-risk areas.

The current approach to these problems appears to be doubling down on the 20th-century practices that created the conditions for devastating fire in the first place. Instead of investing heavily in mitigation, disasters continue to drain resources. The three most expensive fire years have all been since 2017, with a record of $3.1 billion spent on fire suppression in 2018. The 2021 fire year is poised to move into that group. Funding for fuels treatments and the skilled personnel to do the work has not kept pace and until results are seen on a landscape scale, suppression costs will likely continue to rise. An increase in post-fire rehabilitation and recovery is also needed to restore watersheds and create more resilient landscapes.

New investment may be needed to expand and modernize current wildfire institutions responsible for fighting fire: the U.S. Forest Service, Department of the Interior land management agencies, and state agencies. Proposed pay raises at the federal level could be a great start, but further training across the career pipeline could also help. Ending the practice of treating firefighting and fire management as mere seasonal activities might also contribute to improve firefighting.

Instead of simply growing wildland fire budgets, a rethinking of people's relationship with fire could be in order.

Those steps may not be enough. Instead of simply growing wildland fire budgets, a rethinking of people's relationship with fire could be in order. This may entail orienting land, community, and land management agencies around the fire years that may come next year, in 2030, and the rest of the 21st century. Fire could be made a core consideration in how forests and other wildlands are managed, with priority assigned to appropriate mitigation techniques like thinning, controlled burns, and fuel breaks in addition to the recreation and economic benefits current systems often emphasize. Communities in fire-prone areas could be structured around fire priorities with investments made to build more defensible spaces for homes, expand preparedness activities, mitigate smoke impacts, and provide education on the importance of controlled burns.

The current path is not sustainable. Accepting that wildland fires are a part of our environment and working to live with fires rather than continuously fight against them may be the most responsible path forward. This shift could take significant resources and challenge us all, but it may be necessary.

Jim Whittington is a former wildfire incident responder and public information officer who now offers support and coaching to wildfire and all-risk incident management personnel. Aaron Clark-Ginsberg is a social scientist at the nonprofit, nonpartisan RAND Corporation. Jay Balagna is an assistant policy researcher at RAND.

This commentary originally appeared on The Hill on August 14, 2021. Commentary gives RAND researchers a platform to convey insights based on their professional expertise and often on their peer-reviewed research and analysis.