The Bright Appeal of New Tech May Overshadow Practical Business 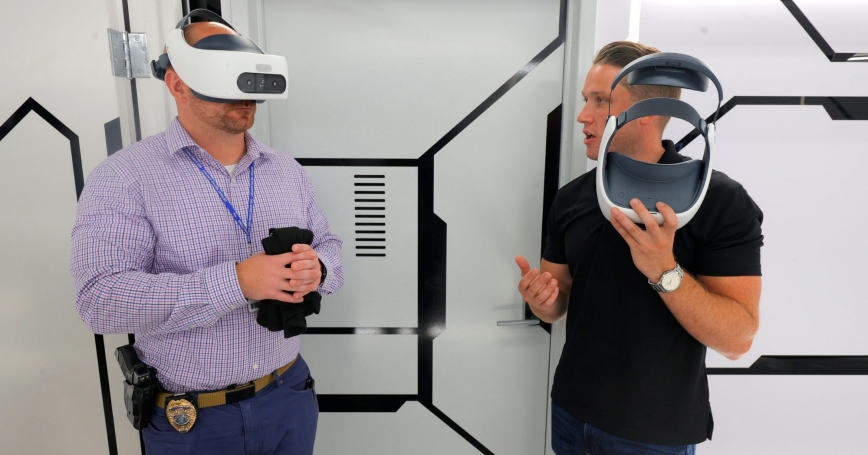 The exciting appeal of virtual reality (VR) and augmented reality (AR) is often in tension with more serious applications and necessary business models. Law enforcement departments, for example, are increasingly considering using AR and VR in a variety of training applications. However, there is a risk of a technology “push,” whereby developers are eager to penetrate a new market sector and actively sell products to new users, with insufficient preliminary efforts to ensure content responds directly to user needs.

As many companies suggest, AR and VR can play significant roles in the future of policing and promise to augment and improve law enforcement training. To be sure, police departments have been using virtual environments for years, but older systems tend to be relatively large, and they often just replay a suite of movies for trainee reactions. These can take up significant space, they can lack accessibility and availability (relative to smaller current hardware), and can come at a significant cost, making systems unavailable to smaller departments. This last point is especially important, given that approximately half of all local police departments (PDF) in the United States employ less than the equivalent of ten officers. But new AR and VR technology can address these issues.

Many companies are developing virtual content to help law enforcement train empathy, de-escalation, response to shoot/don't-shoot situations, and more. These topics are especially relevant to recent events and could help address serious issues with training. AR and VR could increase accessibility and thus increase training repetitions. In addition to training, AR and VR can help with reviewing and analyzing (PDF) complex crime scenes that involve large amounts of data in various forms. AR and VR could also potentially provide advanced information to officers, in order to increase situational awareness prior to arriving on a scene.

AR and VR can play significant roles in the future of policing and promise to augment and improve law enforcement training.

Despite the potential benefits of these many applications, there is a risk of industry focusing on the newly accessible law-enforcement market simply for the sake of increased market share. Historically, AR and VR were exciting technologies looking for applications. Now, there are apparent and practical applications, but there can still be a tendency to push the technology out by leveraging its “cool” factor rather than appropriately leveraging its value. To increase its value to law enforcement, instead of the virtual content just appealing to the buyer, it might also respond directly to specific user needs, especially when used for training. The content could map to specific training goals (task and skills). As noted in a RAND study, fidelity, for example, might not simply be as high as possible, but rather, it could suit the specific use.

Because the law enforcement market is relatively small (compared to the entertainment market from which AR and VR grew, for example), having fewer users for law enforcement–specific content could mean developers have to charge relatively high prices. Department budgets may not support the acquisition of sufficient hardware, let alone properly designed content that responds to localized training needs. Video games are relatively inexpensive, in part because there are millions of users, but there are not millions of police departments. This means smaller AR/VR companies can have difficulties entering the market. In addition, even larger companies may have to leverage other internal resources to support the costs of entering the market. Ultimately, although the potential benefits are significant, the business model for using AR/VR to support law enforcement across the country is not necessarily simple.

Ensuring AR and VR content responds to user needs and ensuring there is a business model that incentivizes industry but allows access for all police departments, are challenging and complex policy problems. While policy and its implementation may sometimes fall by the wayside in the face of exciting technology developments, in this case, policy might best be considered as the technology matures, not after.

Tim Marler is a senior research engineer at the nonprofit, nonpartisan RAND Corporation and a professor at the Pardee RAND Graduate School.

This commentary originally appeared on Inside Sources on August 23, 2021. Commentary gives RAND researchers a platform to convey insights based on their professional expertise and often on their peer-reviewed research and analysis.