With the Evacuation Over, Afghanistan Is Left to Contend with a Worsening Refugee Crisis 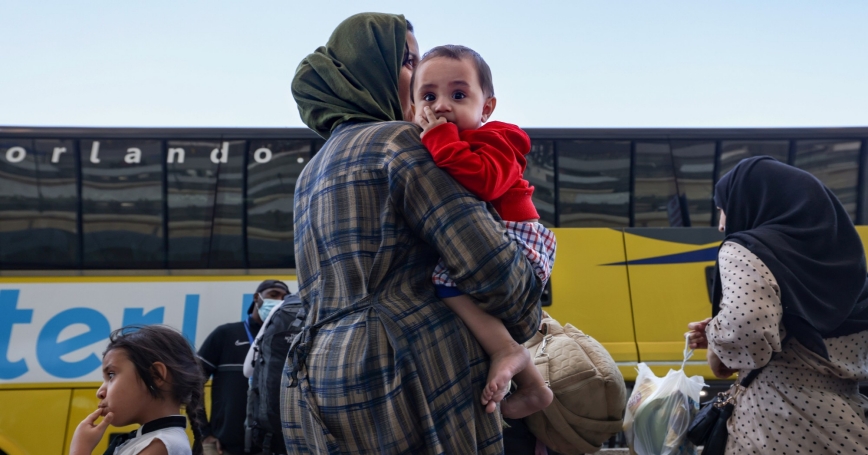 Afghan refugees board buses that will take them to a processing center after arriving at Dulles International Airport in Dulles, Virginia, September 2, 2021

by Louay Constant and Shelly Culbertson

The evacuation of more than 100,000 civilians from Afghanistan is over, and Afghan refugees have started arriving in the United States, at military bases in other countries, or elsewhere for asylum processing. But those evacuated represent just a sliver of the millions of Afghans who have lost their homes and livelihoods due to war and may be on the move, yet again.

According to the United Nations High Commission on Refugees, there were already 2.8 million Afghan refugees, an estimated 2.9 to 4 million internally displaced persons (IDPs), and close to 250,000 asylum seekers stemming from conflicts stretching multiple decades. Those formal statistics likely are an undercount. Just this year a staggering half a million or more Afghan civilians have been forcibly displaced, and in August, the United Nations issued a no-return advisory noting that the conditions in Afghanistan have rendered it no longer suitable for refugees to return to. In sum, an estimated 15 to 20 percent of all Afghans are currently displaced either within their own country or abroad.

This is not a temporary crisis that will be resolved by the end of the airlift evacuation. This is a multigenerational crisis that has defined a way of life for millions of Afghans, and unless something changes, threatens to define it for millions more for many more years to come.

Policies to help displaced people are based on the false assumption that they will eventually go home. Our recent study on refugee returns finds that conflict-based displacement upends people's lives for the long term. Only about a third repatriate or return within 10 years of a conflict's end.

The number of people in refugee limbo has ballooned globally because the three durable solutions for refugees—return home; resettlement in another country; or integration in the country of asylum (such as gaining citizenship)—happen at such low rates. The reasons are myriad and complex: Multiple, extended conflicts; declining regional cooperation to prevent displacement or create conditions conducive to return; resistance to absorbing refugees through integration or resettlement; and low rates of return. All of these are bearing down on Afghans…

This commentary originally appeared on The National Interest on September 5, 2021. Commentary gives RAND researchers a platform to convey insights based on their professional expertise and often on their peer-reviewed research and analysis.