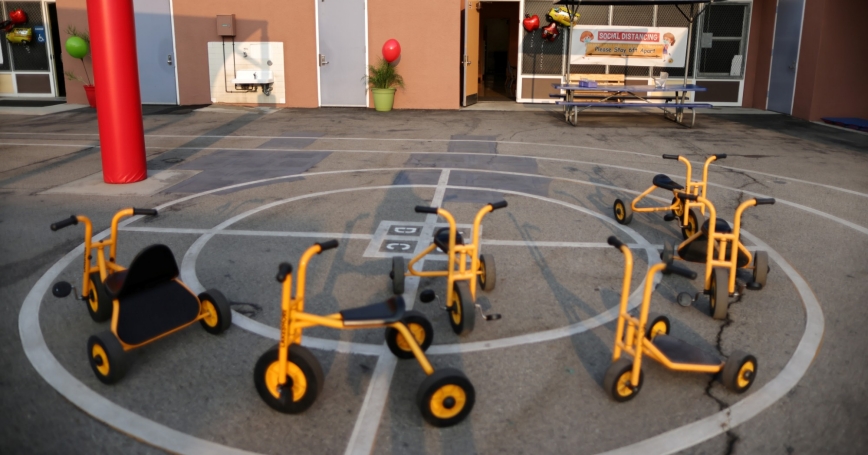 A playground before students arrive at school in Harbor City, California, August 16, 2021

Oakland's Rudsdale Newcomer High School—as its name implies—has a distinct student body: recent immigrant teens. Most came to California from Central America or Mexico. Many are in the country without legal immigration status or are seeking asylum here. Some came to the United States alone.

These dislocated students confront the expected challenges, including interrupted schooling and mastering a second or third language. But they also arrive at school with medical and psychological needs. And they might have to get to immigration court hearings. Rudsdale staff address all those things on a weekly basis. Some students decide they need a paycheck more than a diploma.

“A lot of kids fall off the radar,” says Emma Batten-Bowman, who founded and leads the school and who we spoke with in late September. “A lot say, ‘I'm working, I can't afford to come to school.'”

For a first-of-its-kind study, we estimated just how many students like those at Rudsdale are enrolled in U.S. K–12 schools. We modeled the numbers and locations of undocumented and asylum-seeking children drawing on a range of federal and other data sources, and we also assessed their educational needs. Roughly 575,000 children arrived in the country with their families or unaccompanied over the 36-month period between October 2016 and September 2019 from Mexico and the Northern Triangle (El Salvador, Guatemala, and Honduras). Last year about 491,000 remained in the United States with unresolved immigration status and 321,000 were enrolled in public school here.

California and Texas each enrolled about 50,000 of these children, with the bulk of the newcomers landing in Los Angeles and Houston. School districts in Los Angeles County and Harris County received so many new children that each would have had to hire at least 1,000 additional teachers just to maintain the same teacher-student ratios.

This trend isn't abating. After a short pandemic-related pause, huge numbers of migrants have resumed arriving at the southwest U.S. border; 1.7 million migrants were encountered crossing the border in the last 12 months, the largest number in a single year since at least 1960.

While most were single adults, over a third were adults in families or children. In addition, the United States has taken in tens of thousands of refugees from Afghanistan this year and a string of disasters has brought thousands from Haiti to the Texas-Mexico border.

By federal law, all children in the United States have a right to a public education, regardless of their immigration status. Yet schools are not funded or staffed adequately to support this growing student population or to handle sudden surges in enrollment. Unless school systems, funding policies, and training for teachers change—and quickly—we are setting up schools to fail.

Federal and state education funding currently isn't flexible enough to deal with the sudden arrival of immigrant children. Schools are allocated money based in part on their enrollments at the outset of the school year. Immigrant students, however, join new schools throughout the year. If per-pupil funding were provided on a rolling basis, districts wouldn't be left in the lurch when absorbing dozens or hundreds of immigrant students.

Federal funds like those provided by Title III (PDF) are intended for academic and English language learning support only. This presents problems. So many other hurdles—financial, mental, physical, and legal—stand in the way of these kids' receiving an education. Many of them are dealing with trauma, either from circumstances in their country of origin or from their difficult journey to the United States. When these needs are ignored, that can lead to low attendance, poor grades, and—eventually—leaving school altogether.

Even at Rudsdale, 50 students dropped out last year, according to Batten-Bowman. The school obtained grants and has found creative ways, such as paid on-campus internships, to support students financially. But it hasn't been enough. “The hardest thing about district funding is all the rules and regulations,” Batten-Bowman told us. “I need more flexibility with my money.”

Teachers we interviewed for our study talked openly about feeling underequipped to address the considerable academic, language, and emotional needs of these children. Today more than 70 percent of teachers have at least some English learners in their classrooms, based on survey responses from teachers to some of our recent RAND Corporation surveys. Teachers also need training in trauma-informed instruction, methods that adapt to the behavior and learning needs of distressed children. Certification and credentialing programs and professional development need to include these skills.

In addition, schools often lack staff who speak their new students' language, leaving students with no way to communicate their needs. In California's Oakland Unified, for example, teachers and principals noted to us the need for more staff who speak Mam, an indigenous language of Guatemala, given large numbers of Mam-speaking enrollees.

Philanthropic organizations and policymakers might consider funding grants that could be used flexibly to hire bilingual staff or recruit bilingual volunteers. Organizations like AmeriCorps or other training groups also could collaborate with schools to recruit and train such volunteers.

Teachers need training in trauma-informed instruction, methods that adapt to the behavior and learning needs of distressed children.

Community groups, state agencies, and multiple federal agencies, including the U.S. departments of Homeland Security, Health and Human Services, and Education, also have roles to play in keeping these kids safe and in school.

As just one example of the complexity, the United States has no agreements with the Northern Triangle countries to transfer school records, although such agreements are in place for Mexico and other countries. When undocumented or asylum-seeking children from those countries enroll, schools must start from scratch in determining their needs, and students may be placed in courses they have already taken or in courses far above what they're prepared for. Much stronger coordination between these agencies is needed to prevent youths from falling between the cracks.

Many news stories have captured the plight of immigrant children detained at the border or deported to their home country. Less visible have been the struggles that many immigrant children experience inside U.S. classrooms. Schools need to adopt new approaches to classroom instruction, teacher preparation, flexible funding, and other social supports—because the arrivals aren't slowing down anytime soon.

This commentary originally appeared on Houston Chronicle on October 31, 2021. Commentary gives RAND researchers a platform to convey insights based on their professional expertise and often on their peer-reviewed research and analysis.