Duterte's Dalliance with China Is Over 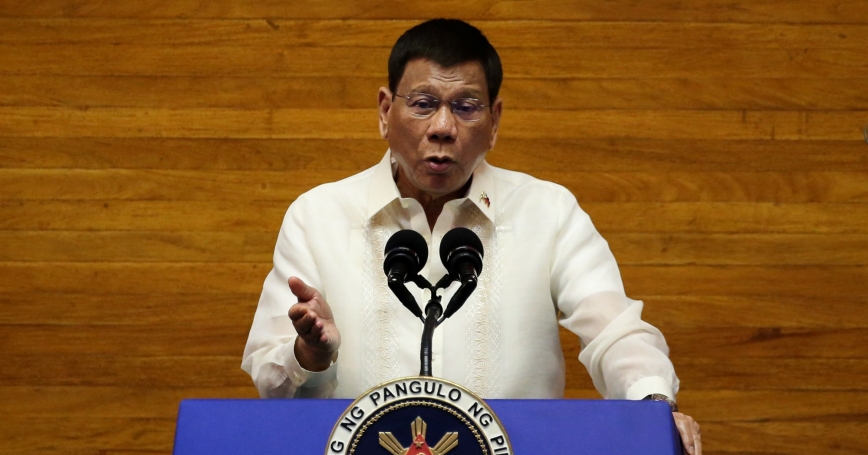 Philippine President Rodrigo Duterte delivers his 6th State of the Nation address at the House of Representative in Manila, Philippines, July 26, 2021

When Philippine President Rodrigo Duterte took office in 2016, he pledged to shift his country's foreign policy away from the United States—a longstanding treaty ally—in favor of China and Russia. On his first trip to Beijing that year, Duterte tried to butter up his hosts by proclaiming that it was “time to say goodbye to Washington.” Other actions and outbursts intended to curry favor with China and loosen ties to the United States followed. But consistency and principle were never Duterte's strong suits. Now, just as easily as he flipped one way, he's flopping the other: His China-friendly policy is effectively over, and he's doing his best to align the Philippines with the United States again.

In recent months, Manila has moved to fully reinstate security ties and rebuild trust with Washington in a vigorous attempt to deter Beijing. Steps include a series of high-level visits; the restoration of wide-ranging defense agreements; Manila's full endorsement of the AUKUS security pact joining Australia, Britain, and the United States; the reestablishment of the Philippines–United States Bilateral Strategic Dialogue; and expanded joint military exercises next year.

What caused the change? It's possible that Duterte feels a bit jilted. His warm embrace of China never produced the results he expected. He hoped, for instance, that he would be able to strike a deal on joint exploration of disputed regions in the South China Sea (known in Manila as the West Philippine Sea) and leverage Beijing's massive infrastructure and investment plan, the Belt and Road Initiative, to support his own “Build! Build! Build!” infrastructure plan. Yet now Duterte has less than a year left in office—his single six-year term ends in June 2022, as required by the Philippine Constitution—and none of those dreams has come to fruition.

Duterte's China-friendly policy is effectively over, and he's doing his best to align the Philippines with the United States again.

To make matters worse, in recent years Beijing has amped up its assertiveness in the South China Sea. In 2019 and early 2020, China encircled the Philippines' Thitu Island (also known as Pag-asa) with hundreds of militia boats, apparently to prevent Philippine authorities from upgrading the island's runway and making other infrastructure improvements. Then in January this year, China authorized its coast guard to fire upon foreign vessels as needed, and in March it moored more than 200 Chinese fishing boats—many of which were likely maritime militia vessels—at the disputed Whitsun Reef.

At a time of heightened superpower tension in Asia, when top U.S. officials are warning of the possibility that China could invade Taiwan, and as China becomes more assertive in its claims over disputed territories, Duterte's shift away from Beijing could have significant implications. For the United States, access to Philippine military bases is vital to deterring Chinese aggression in the South China Sea, in particular, and Asia more generally. That access was threatened while Duterte flirted with China and scorned the United States; now, ties with the United States are again being reinforced.

Duterte's latest change of heart can probably be dated to as early as June 2020. Four months earlier, he had decided to terminate the U.S.-Philippines Visiting Forces Agreement (VFA), which is critical to the U.S. military's ability to seamlessly enter and move around the Philippines in the event of a crisis. It was a bold rejection of the United States, made in a fit of rage over Washington's move to deny a visa to Duterte's former police chief, who was suspected of committing extrajudicial killings. But it seems that no sooner did Duterte take that angry swipe than he thought better of it.

First he allowed his secretary of foreign affairs, Teodoro Locsin Jr., to postpone the VFA termination. Then Manila once again postponed the termination in November 2020, citing the need for stability in the region during a time of great-power competition, and in June it did so for a third time to “further review” the pros and cons of the agreement. Finally, during U.S. Secretary of Defense Lloyd Austin's visit to the Philippines in July this year, Duterte permanently ended his objections to the VFA and restored the agreement.

All the while, Duterte made other moves to edge away from China. In July 2020, after a delay of four years, he finally authorized his Department of Foreign Affairs to call upon China to recognize a 2016 ruling by the Permanent Court of Arbitration in The Hague that rejected Beijing's claims to disputed waters. Two months later, Duterte followed up by directly addressing the issue of territorial disputes in the South China Sea at the United Nations General Assembly. He said then that the 2016 ruling in favor of the Philippines was “beyond compromise” and that any attempts to undermine it would be rejected.

More recently, the United States and the Philippines have been feverishly moving to reenergize ties. In late August, the commander of U.S. Indo-Pacific Command, Adm. John Aquilino, visited the Philippines to reaffirm the alliance; Marine Corps Commandant David Berger followed with a visit in September. Also in September, both Locsin and Philippine Secretary of National Defense Delfin Lorenzana visited Washington to meet with their counterparts and celebrate the 70th anniversary of the establishment of the U.S.-Philippines Mutual Defense Treaty.

Of perhaps greatest geostrategic significance, however, are moves to implement the Enhanced Defense Cooperation Agreement. Inked in 2014 and unofficially frozen by Duterte in 2016, the agreement authorizes the U.S. military to pre-position equipment, build structures, and rotate forces through five designated Philippine bases: Antonio Bautista Air Base, Basa Air Base, Fort Magsaysay, Lumbia Air Base, and Mactan-Benito Ebuen Air Base. U.S. military access to these bases could prove critical in an emergency, drastically reducing Washington's response time to any Chinese provocation or escalation in the South China Sea.

In yet another sign of a thaw in the U.S.-Philippines alliance, Manila in late September became the first—and, to date, the only—Southeast Asian government to fully endorse the newly minted AUKUS defense and security agreement. AUKUS is clearly aimed at countering China. Duterte would never have authorized endorsement if he were not fully committed to shredding his own China engagement policy.

Duterte would never have authorized endorsement of AUKUS if he were not fully committed to shredding his own China engagement policy.

Meanwhile, the United States and the Philippines are preparing for full-scale military exercises next year, the first since the pandemic curtailed them in 2020. Duterte had long sought to cancel alliance exercises, such as the annual Balikatan exercise, but he's been tilting in the opposite direction lately, not least because the Philippines' defense establishment benefits significantly from interactions with the U.S. military.

Beyond joint security efforts, the United States and the Philippines have opened new avenues of cooperation due to the COVID-19 pandemic. Washington has shipped millions of vaccines to the Philippines, and while China has done so as well, high Philippine distrust of China is hindering Beijing's success in leveraging vaccine diplomacy for geostrategic gains.

Although Duterte in May took a Sinopharm shot—a Chinese-manufactured vaccine that had not been authorized for use in the Philippines—he later publicly apologized. He even felt compelled to highlight that China's donations, broadly speaking, were not part of any quid pro quo between Beijing and Manila. By contrast, in a televised address in August, Duterte publicly thanked the United States for its vaccines and said the donations were a key factor in his decision to drop VFA termination.

All in all, it would appear that Duterte's China-friendly policy is dead, or at least on life support. While he may continue to compliment Beijing between now and when he leaves office next June, his actions are very likely to prioritize Washington.

What comes after Duterte, however, remains murky. According to a recent analysis, only one out of the seven main contenders to become the next president of the Philippines—Leni Robredo, Duterte's vice president—holds a hard-line approach toward China. But given the fresh momentum behind U.S.-Philippine relations, any future president is likely to favor Washington over Beijing, even if they don't publicly say so.

This commentary originally appeared on Foreign Policy on November 2, 2021. Commentary gives RAND researchers a platform to convey insights based on their professional expertise and often on their peer-reviewed research and analysis.