It's Time for the West to Engage with the Taliban 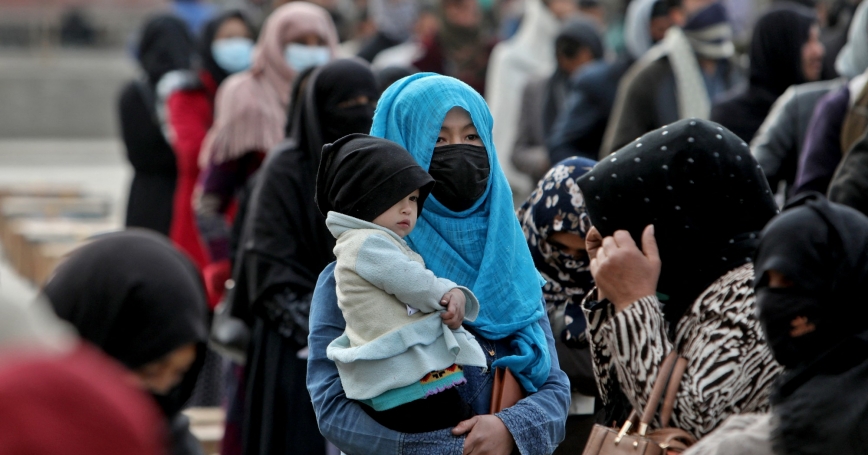 An Afghan woman holds her child as she and others wait to receive package being distributed by a Turkish humanitarian aid group in Kabul, Afghanistan, December 15, 2021

The Taliban won the war in Afghanistan. Perhaps it was inevitable, perhaps it was not. But it is in any case a reality. And the consequences of the international withdrawal are horrifying. Half of the nearly 40 million people in Afghanistan are now at risk of famine and starvation. Covid-19 has spread across a country with next to no vaccination or medical ventilator capacity. The economy is broken. Prices and unemployment are soaring. Health care systems are disintegrating. And there is no coherent long-term strategy to prevent a major terrorist threat from re-emerging.

Yet all is not lost. Despite the debacle this summer, the war's end came with remarkably little bloodshed. That was not the result of any U.S. or NATO policy but it was a welcome and surprising outcome. Moreover, despite having been bitter enemies for two decades, NATO and the Taliban found a modus vivendi this summer, as the latter even helped us (imperfectly) evacuate more than 120,000 people at risk as Kabul fell. That tacit cooperation suggests a path forward for counterterrorism policy as well.

Alas, these silver linings to the withdrawal are both at dire risk. It will prove little solace that civil war and massive revenge killings were averted this year if many hundreds of thousands of Afghans suffer preventable deaths from starvation and privation this winter. Moreover, if we refuse to engage with the Taliban at any meaningful level, its leadership might have less and less motivation to rein in terrorist movements that could again take root there. And economic collapse and isolation risk provoking deeper instability, insecurity and repression.

The international community should now look seriously at making a deal with the Taliban to address these risks. And they should do so very quickly before the harsh winter and starvation fully sets in.

It will prove little solace that civil war and massive revenge killings were averted if many hundreds of thousands of Afghans suffer preventable deaths from starvation and privation this winter.

Instead, we could deliver humanitarian aid and a basic level of development support to key sectors of the Afghan economy—including the export economy—immediately, not as part of a negotiation. (There are for example more than a million rural women working in the carpet industry who could be exporting their rugs). The U.S. and its allies could ensure that sanctions do not impede such aid and development.

But the United States and the international community also have other significant things to offer that could influence Taliban behaviour—including diplomatic recognition, more generous development and technical assistance, and access to that country's foreign bank accounts.

The Taliban, and Afghan people, desperately need all these things. Judging by their relatively restrained behaviour this summer and autumn, the Taliban seem to know it. They have also shown that, for the most part (though still directed by a misogynistic and hard-line Pashtun male leadership), they can at least generally enforce their decisions through the ranks, maintain security and aid delivery across most of the country. NGOs and UN agencies have been able to distribute aid and development assistance to much of the population in order to resuscitate some economic activity and tackle starvation.

In exchange for diplomatic recognition, and gradual, conditional access to funds as well as other resources, the Taliban might be expected to meet minimal standards of human rights and fair governance. Negotiators could push hard for crucially important goals such as: education, even if separate, for girls and women; legal rights for girls and women, and for people from minority ethnic and religious groups; equal access to food, health care, and job opportunities for all elements of society; and denying terrorists safe haven there.

Any deal would also need to ensure full protection and access for development and humanitarian workers, including internationals. The international community would need a presence on the ground, in the form of technical assistance teams and a small (possibly UN staffed) peace observation mission, to ensure that the bargain is kept and to assist where desired in its implementation. This kind of bargain may now be the only realistic route to avoiding consequences far more horrifying than anything that has so far followed the international withdrawal from Kabul.

Rory Stewart, a senior fellow at Yale's Jackson Center, is a former UK Secretary of State for International Development, and the author of “the Places in Between.” Michael E. O'Hanlon holds the Phil Knight Chair on defense and strategy at the Brookings Institution. Obaid Younossi is director of the defense and political sciences department at the nonprofit, nonpartisan RAND Corporation.

This commentary originally appeared on UnHerd on December 16, 2021. Commentary gives RAND researchers a platform to convey insights based on their professional expertise and often on their peer-reviewed research and analysis.