The Future and Past of War and Disease 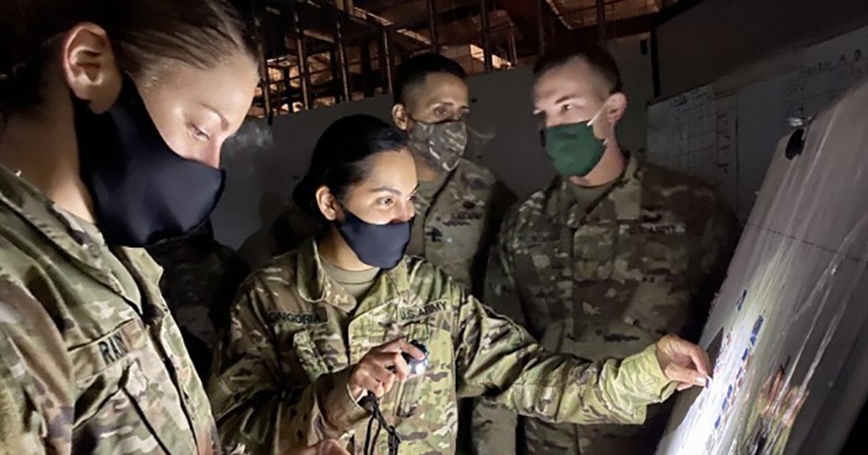 by Michael Spirtas and Stephen Webber

Mobilizing for great power conflict is hard enough, but with a new variant of COVID-19 running rampant, the U.S. military would have its hands full if it had to fight tonight.

Fortunately, today the U.S. military is fairly well-postured to tackle a deployment during a pandemic, given its experience fighting COVID-19 over the past few years. Relatively few military personnel have been lost to the disease.

The U.S. government is actively reviewing its efforts to counter biological attacks and the Department of Defense is taking steps that could allow it to perform day-to-day operations during a pandemic, but it might not be preparing adequately for a future large-scale operation during a more-transmissible and lethal pandemic.

Imagine a war with China, with a deadlier virus decimating carrier crews and air bases in the Pacific. Would the United States and allied militaries slow operations to limit infection, at the risk of losing the war, or would they try to fight through the disease? DoD could do more to prepare for the next pandemic, which could occur within the next 60 years.

DoD could do more to prepare for the next pandemic, which could occur within the next 60 years.

War and disease have a long and wretched history. The Athenians battled plague in addition to Sparta. In the late Middle Ages, disease contributed to the fall of the Venetian Empire. Napoleon benefited from Venice's fall, but his own empire was brought low by disease. The Grande Armée that invaded Russia was hurt more by typhus than by the Russians (PDF).

Disease has also played a role in American military history. In 1777, George Washington inoculated the Continental Army against smallpox. More than 60% of casualties on both sides of the American Civil War were attributed to disease. In World War I, the 1918 influenza pandemic hampered efforts to mobilize the American Expeditionary Forces.

Fortunately, advances (PDF) in hygiene, antibiotics, and vaccination, along with the development of a world-class medical corps, has made disease something of an afterthought. But has success produced a blindspot in the U.S. defense community? DoD, created in the wake of World War II, has only existed in an era when the deadliest opponent of the U.S. armed forces has been human.

The department's structure and culture may not be helping it prepare for a future pandemic. Responsibilities are fragmented across different organizations, with entities such as the Office of the Secretary of Defense Policy, OSD Office of Research and Engineering, Northern Command, and the Defense Health Agency all playing different and potentially competing roles.

In addition, DoD personnel who create plans are not used to considering the impact of a pandemic, nor do DoD personnel who develop future forces build capabilities. Training, exercises, and wargames rarely take infectious diseases into account.

A deadlier pandemic could complicate combat operations and could even lead to defeat. Policymakers could be forced to choose between supporting civil authorities at home and the external fight. Another virus could be more lethal for younger adults, who comprise most of the fighting force.

Most of the conflicts the U.S. military contemplates involve deploying forces far from the United States, which means that U.S. forces will likely be more affected by a pandemic than an adversary. An outbreak aboard a carrier, similar to what occurred aboard the Theodore Roosevelt, could be much more deadly and could kill more forces than an adversary.

Any place forces congregate (PDF), from airfields to staging facilities to forward operating locations, could be disease vectors, and measures to slow the spread of disease could negatively impact operations. Much of the U.S. military's logistics network is dependent upon private industry and intertwined with civilian infrastructure, which may become unavailable during an outbreak. Mitigation measures such as social distancing, testing, and quarantines could slow deployment timelines.

For those who might seek comfort in the notion that a pandemic would hinder an adversary as much as it impacts U.S. forces, it would be good to remember that past pandemics have sometimes hurt one side of a conflict more than another.

The steps necessary to minimize the impact of future pandemics on military operations are not costly.

One exception to these relatively “low-cost” propositions might be placing a greater emphasis on developing unmanned platforms.

But there may not be much of an appetite in the department for devoting additional resources to new initiatives like pandemic preparedness. Defense Secretary Lloyd Austin has declared COVID-19 a priority for DoD, but it remains to be seen what form this priority will take or how long it will last. After the 1918 flu pandemic, some argued that the American defense community ignored the episode. Will a similar argument be made this time?

Michael Spirtas is a senior political scientist and an associate director of the International Security and Defense Policy Center at the nonprofit, nonpartisan RAND Corporation. Stephen Webber is a defense analyst at RAND.