Continuity of Government in Ukraine 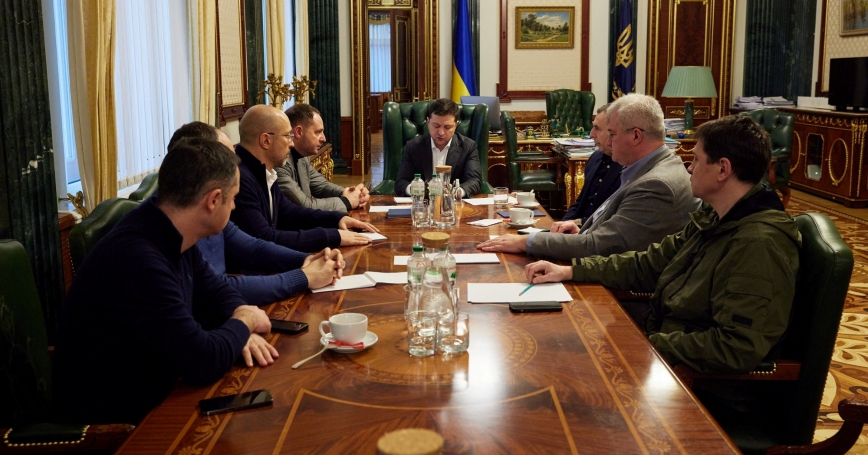 Ukrainian President Volodymyr Zelensky chairs an urgent meeting with leadership of the government, and representatives of the defense and economic sectors, in Kyiv, Ukraine, February 24, 2022

by William Courtney and Khrystyna Holynska

On February 23 Russia launched a war on Ukraine. Ukraine's president, Volodymyr Zelensky, and its parliament (Rada) might accelerate steps to ensure the continuity of government, a need made more urgent because of the risk that Kyiv could soon fall.

Zelensky may still underestimate dangers. Despite reports that government relocation plans have been discussed with the United States, a Zelensky associate reportedly said the president would “not run away from his own capital.” Yet, forces in Russia and Belarus are poised to lunge southward on both sides of the Dnipro River and encircle Kyiv within days.

Ukraine's armed forces report of shelling of various cities and towns across the country, including Boryspil airport, close to the capital. Other attempts to destabilize Ukraine were underway earlier, such as pro-Russian “protests” in Kyiv and almost nonstop cyberattacks on Ukrainian government institutions and banks.

Zelensky's reluctance for weeks to warn Ukrainians of the severity of the threat may leave more citizens, especially in large cities, vulnerable to being trapped behind an invading force. The delay may also help Russian forces seize intact more of the country's governmental capacity.

If Zelensky were to stay behind in Kyiv and be captured, this could deal a psychological blow to the morale of Ukrainians and diminish their will to resist. Even more important is the survival of the presidency and the legislative and judicial branches. This may require a prompt, large-scale relocation to western Ukraine, and support from Poland. Reconstitution of any lost leadership capacity could require Rada approval to enhance legitimacy.

A government collapse could impede organization and operation of an insurgency based in the mountains of western Ukraine, and the will of others to support it.

A government collapse could impede organization and operation of an insurgency based in the mountains of western Ukraine, and the will of others to support it.

Pursuit of a quick government collapse may explain Russia's apparent strategy of early “shock and awe” attacks on Kyiv and other cities, and its reported plan to assassinate and arrest key Ukrainian figures. If Zelensky were captured, Russian authorities might not kill him as they did Prime Minister Imre Nagy after Soviet tanks rolled into Hungary in 1956, but the Kremlin could pressure and embarrass him.

To reduce these risks, Ukraine's leadership might accelerate preparations to ensure the continuity of government. Some steps are doubtless underway but out of public view.

The leadership could take steps to clarify the line of presidential succession beyond a few top leaders. Authority passed to the speaker of the Verkhovna Rada in 2014 when President Viktor Yanukovych fled office. A deep bench offers more resilience. Below the president and vice president, the U.S. line of succession has 17 legislative leaders and Cabinet secretaries. A surviving Rada could validate succession measures.

At the same time, a “shadow government” could be created in multiple relocations, and let it practice exercising control of essential functions. President George W. Bush established a shadow government after the terrorist attacks on September 11, 2001. Key leaders in each government agency might be selected for emergency relocation.

Possible Ukrainian government development of a mix of dispersed and hardened relocation capabilities in western Ukraine to provide resilience and redundancy might also help. Camouflage, concealment, and mobility of above-ground assets could lessen risks to attack from the air.

An accord with Poland on relocation could be completed. Ukraine's foreign ministry and central bank might move right away to Warsaw. It offers access to foreign embassies, banks, and media. Przemysl, just inside the Polish border, could host staff and logistics for other operations in Lviv, Ukraine.

Internet and shortwave broadcasting capabilities could be established at relocation sites. Informing and rallying Ukrainians could be essential for effective governance. Radio Free Europe/Radio Liberty, and other Western broadcasters might assist.

Locations in the Carpathian Mountains could become bases for government operations. The Bukovel ski resort, for example, has housing and road and helicopter access. Caves could enable hardened operations and safe storage.

Ukraine's leaders could act with dispatch to relocate essential functions and plan for potential disruptions in leadership and capacity to govern.

The government might also begin preparing for mass casualties and for vast numbers of internally displaced persons and refugees. Some humanitarian support for refugees is being established in Poland, with U.S. military help.

Continuity operations differ from those aimed at supporting an insurgency but could facilitate political leadership essential to it. Civilian assets for strategic communications could convey information about activities of occupying forces and instructions for civilian action. They could also help document and disseminate information about repression in occupied areas.

The hour is almost too late, but Ukraine's leaders could act with dispatch to relocate essential functions and plan for potential disruptions in leadership and capacity to govern. The West has extensive experience with continuity matters and might offer advice and material support.

William Courtney, an adjunct senior fellow at the nonprofit, nonpartisan RAND Corporation, was U.S. ambassador to Kazakhstan, Georgia, and U.S.-USSR negotiations to implement the Threshold Test Ban Treaty. Khrystyna Holynska is an assistant policy researcher at RAND, Ph.D. student at the Pardee RAND Graduate School, and visiting professor at the Kyiv School of Economics.

This commentary originally appeared on The Hill on February 25, 2022. Commentary gives RAND researchers a platform to convey insights based on their professional expertise and often on their peer-reviewed research and analysis.