A Promising Era for Women of Color in U.S. Elections, but Gains in Broader Workplace Leadership Remain Elusive 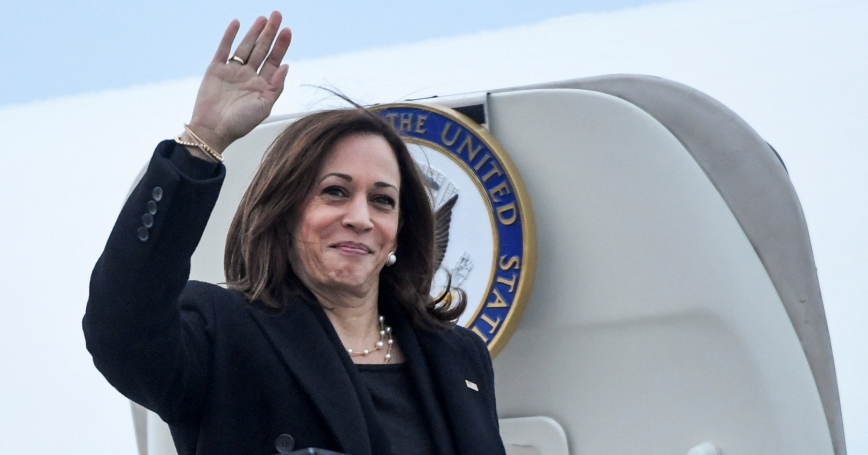 U.S. Vice President Kamala Harris waves as she boards Air Force Two prior to departure from Bucharest after a trip to Poland and Romania amid Russia's invasion of Ukraine, March 11, 2022

2020 saw the highest number of women of color elected to Congress in U.S. history, as well as the election of Vice President Kamala Harris, the first woman (and woman of color) to hold the position. These advances, however, have not been matched by balanced representation more generally in leadership positions outside of politics. Women of color remain significantly underrepresented in workplace leadership (4 percent at executive level) and along the promotion pipeline in comparison to white women (20 percent at executive level), as well as to black and white men (13 percent and 62 percent, respectively).

So while we may celebrate the wins, questions remain: Are these successes just drops in the ocean? How much actual advancement has been made? And how much more work needs to be done to achieve the combination of race and gender equity in leadership? Ample research over the last decade highlights where progress has been made and where there are continued gaps. Here are four takeaways from the research to date, as well as suggestions for areas where additional research and action might offer fresh ways forward.

First, more attention could be paid to descriptive representation. This refers to the degree by which the members of a population are represented in leadership by individuals with similar background and experiences. It matters not just for the sake of fairness but also to ensure that the challenges of marginalized populations are addressed.

Some studies have shown that women of color (WOC) in politics have been found to be more effective in understanding the intersectionalities of policy, particularly in legislating and advocating for their societies, than white men and women. A rise in the number of women in corporate boards could translate to a rise in the percentage of women in top management. Furthermore, quality descriptive representation encourages citizens' trust in the government, increases civic engagement, and provides aspirational figures for the next generation.

Second, while more data and research have helped us better understand the barriers of WOC in leadership, we can also see that little seems to have changed. Challenges like microaggressions, racism, tokenism, “the broken rung,” “the glass cliff,” childcare needs, lack of sponsorship/mentorship, and inadequate career opportunities persist. Studies show that social capital, cash ceilings, and burnout can also play a vital role. For example, women of color are less likely to get help navigating office politics, or to have their manager interact with them outside the office, and are therefore often excluded from informal networking opportunities. Now that we have such good knowledge about these problems, it is fair to ask—and to investigate—why so little has changed.

Third, consider the potential for intervention tools to promote leadership development. While there has been a lot of research on the challenges WOC face on the path to leadership, as noted above, the same attention does not appear to have been given to tools that can be used to remove these barriers.

Researchers say there is a need for robust tools that tackle differences in promotion, bias in performance reviews, inequitable promotion, burnout, lack of advocacy/allyship, inadequate party campaign support, and race/gender stereotypes. More systems-wide changes might also help. And it would seem to make sense to assess the impact and effectiveness of these intervention tools.

This provides an opportunity for research and policy analysis organizations to investigate questions such as: What tools are effective and which are not? What improvement can be made to the promotion system to make it equitable? What interventions are working to retain WOC in leadership? What are the best ways to implement programs that might hasten the process of equity for WOC? How can burnout be addressed? Are there enough earlier interventions tools (e.g., training young students about leadership) in place? Are there effective tools to train women to be leaders while not losing themselves in the process?

And fourth, “intersectionality” could play an important role in the pursuit of progress. Experiences vary such that there is a difference between the challenges of women in leadership and women of color in leadership. For instance, in politics, women of color have been constrained to run in majority-minority districts, while non-Hispanic white women do not experience the same constraint.

The challenges of a woman of color are not simply the challenges of race or gender, but perhaps a unique set of challenges that differ from others of the same gender or ethnicity. Acknowledging the role of intersectionality and accounting for it when attempting to understand and address the challenges of WOC in leadership could help to identify barriers and apply case-specific solutions.

While progress toward balanced representation has been slow, these four areas could provide an opportunity for government and corporate leaders, as well as research and policy analysis organizations such as my own, to design and implement effective intervention tools to accelerate this growth. As Shirley Chisholm—the first African-American woman elected to Congress—put it in 1968: “You don't make progress by standing on the sidelines, whimpering and complaining. You make progress by implementing ideas.”

Zara Fatima Abdurahaman, a former engineer in the oil and gas sector in Nigeria, is an assistant policy analyst at the nonprofit, nonpartisan RAND Corporation and a Ph.D. student at Pardee RAND Graduate School. She is also working with RAND's Center to Advance Racial Equity Policy.