After Russia's Ukraine Invasion, Seven Assumptions the U.S. and NATO Allies Should Drop 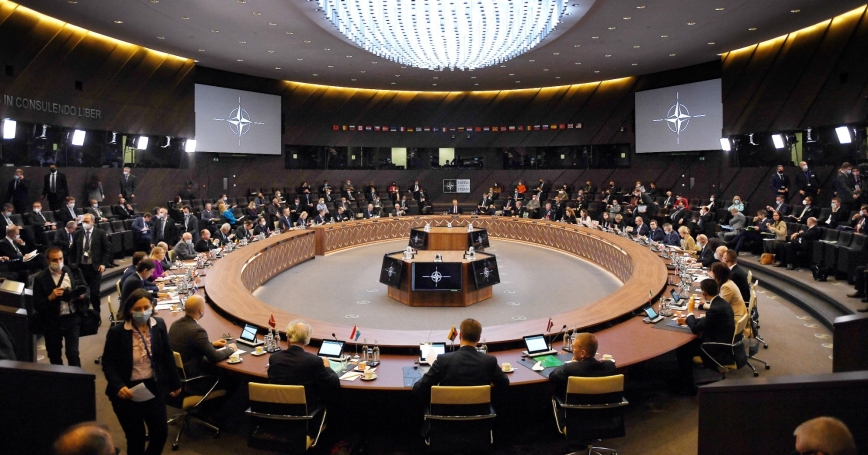 Photo by Olivier Douliery/Pool via Reuters

The ongoing Russian war against Ukraine is a human tragedy on multiple levels. On a devastating personal level, many Ukrainian people have lost their lives, loved ones, homes, jobs, and freedoms because of it. On a geostrategic level, Western leaders by now should have lost many previous assumptions regarding foreign policy and defense strategies related to deterring Russia.

To its credit, NATO deployed a single battalion in each Baltic state as well as Poland as a signal of its commitment two years after Russia's invasion of Crimea in 2014. Yet, if in February Russia had attacked west into the Baltics on short warning, instead of going south into Ukraine, then NATO would not have been ready to deny Russian objectives and prevent a rapid fait accompli.

If that had been the case, the American president and NATO leaders would have faced a terrible choice to either rely entirely on sanctions, escalate with tactical nuclear weapons, or take months to deploy forces and logistics to launch a destructive counteroffensive—all in the face of threats of Russian nuclear escalation meant to discourage NATO's resolve to follow through.

Defending NATO allies in order to deter aggression in the first place is more credible and much cheaper than bloody liberation.

Defending NATO allies in order to deter aggression in the first place is more credible and much cheaper than bloody liberation. Yet NATO lacked the political consensus necessary in order to posture the forces sufficient to avoid a rapid defeat, as recommended in a RAND study I coauthored, Reinforcing Deterrence on NATO's Eastern Flank, published in 2016. Why was NATO only able to agree to deploy four rotational battalions, essentially 25 percent of the force recommended by the study?

Given the realizations wrought by the recent invasion of Ukraine, the United States and its NATO allies might reconsider the following assumptions and arguments—raised by various sources in government and academia over the last seven years—that have limited conventional military deterrence in Europe:

The assumption here is that the United States and NATO should avoid direct military conflict with Russia in Ukraine due to the risk of nuclear escalation. Yet the false choice between extremes of wanton intervention and excessive restraint often ignores defensive deterrence as a rational alternative to prevent war and promote prosperity.

This assumption seems to be confirmation bias, namely believing that dictators would make similar calculations about costs and benefits as democratically elected leaders. Dictators have a surprising risk tolerance and may prioritize strategic gains above economic effects. Additionally, it's worth noting that support for sanctions may weaken the longer Western citizens suffer because of the effects of these sanctions on shared finance, energy, and supply chains.

There is no political will or military capability in NATO to invade Russia, and Putin knows it. If NATO were to station three brigades to reinforce deterrence in the Baltics, then Russia would still defend at a 10:1 advantage, well above a doctrinal 1:3 ratio for a successful defense. Russian nuclear weapons still make the costs of invading the Russian motherland infinitely greater than any benefits. The excessive fear about provoking Russia with modest ground forces reflects either a diplomatic hope that Putin (who has increasingly behaved as a lying, murdering, war-starting dictator) will negotiate in good faith, or a smokescreen to conceal NATO members' reluctance to resource readiness and move forces from local districts to Eastern Europe.

Russia Will Never Attack NATO Because of Article V

The NATO treaty's Article V—an attack on one member is an attack on all—is most effective when backed up by joint forces trained and ready to defend on day one of a Russian attack, not thousands of miles and months away from the fight. Even if Russia were to be defeated in Ukraine, it would seem irresponsible to assume a resulting drift into another “end of history.” For as long as Russian leaders fear democratic values, define conflicting interests, reject the status quo and the current rules-based world order, and have the capability to wage war, it seems dangerous to assume a war will never happen and as a result leave the eastern flank exposed.

The airpower “hammer” needs a ground “anvil” working together as a joint team. Otherwise, Russian forces could quickly seize objectives and “go to ground” in restricted terrain and cities, raising NATO concerns about civilian casualties. Ukraine has 44 million people and 200,000 soldiers who fought hard to defend and delay the Russian advance. The Baltic States have only 6.2 million people and 22,000 soldiers who could be overrun more easily. It is unrealistic to assume the Baltic states could defeat Russian aggression on the ground while NATO enjoys relative safety with stand-off attacks in the air.

This theory (i.e., counterbalancing) has been repeatedly contradicted by an ugly fact: The Russian graduates of the KGB School of Government do not agree. The price Putin has demanded in exchange for Russian cooperation is exorbitant: withdrawing NATO forces from Eastern Europe, leaving allies exposed to coercion or invasion. The benefits of Russian cooperation are suspect. Will Russia redeploy its Western forces to the Chinese border? Will Russia halt energy exports and impose sanctions? Will Russia attack China if it invades Taiwan? That doesn't seem likely. Genuine Russian cooperation to contain China seems unlikely to happen until genuine Russian democracy allows for a reduction in tensions with the West, or when China presents a direct threat to Russia. Neither scenario seems realistic in the near or even distant future.

As China becomes a superpower seeking to dominate Asia and exercise global influence, it is true Americans can no longer care more about European security than the Europeans. But at the very least, the United States has vital interests at stake when the failure to deter Russian aggression against NATO allies risks nuclear escalation in Europe. Credible deterrence does not require anything close to Cold War force levels—just one allied corps instead of eight might suffice. The American forces already exist; were the decision made to do so, three armored brigades are just based on the wrong side of the Atlantic. The European forces also already largely exist; they are just not trained, equipped, and ready. If the United States wants to achieve a “stable and predictable” security environment in Europe to focus on China, there are more-effective and available options worth considering.

It is obvious that Russia has invalidated the 1997 NATO-Russia Founding Act with its large-scale invasion of Ukraine, and that it has fundamentally changed the security environment in Europe. NATO is now free to respond accordingly and base its forces in Eastern Europe. For its part, the United States could consider basing the V Corps headquarters, the 1st Armored Division, and supporting enablers in Poland. NATO allies could consider growing the battalions in the Baltics to three full brigades.

Making sure the West is ready to defend and thus deter a larger war that must never be fought is a critically important task.

States often begin wars when they do not accept the status quo and are optimistic they can gain more (or lose less) by fighting than by negotiating. Authoritarian leaders, fearing freedom will lead to democratic change that will weaken or overthrow their regimes, have always sought to crush internal dissent and/or attempt to dominate a regional sphere of influence. These sources of conflict have not changed: Their existence preceded the February 24 invasion of Ukraine by the Russian military.

When the consequences of miscalculation and escalation are so devastating—as we currently see unfolding in Ukraine—making sure we are ready to defend and thus deter a larger war that must never be fought is a critically important task worthy of our attention and a reexamination of our assumptions.

Michael W. Johnson is a retired U.S. Army strategist and senior defense research analyst at the RAND Corporation. He's the coauthor of the RAND study Reinforcing Deterrence on NATO's Eastern Flank, published in 2016.

This commentary originally appeared on Breaking Defense on March 18, 2022. Commentary gives RAND researchers a platform to convey insights based on their professional expertise and often on their peer-reviewed research and analysis.