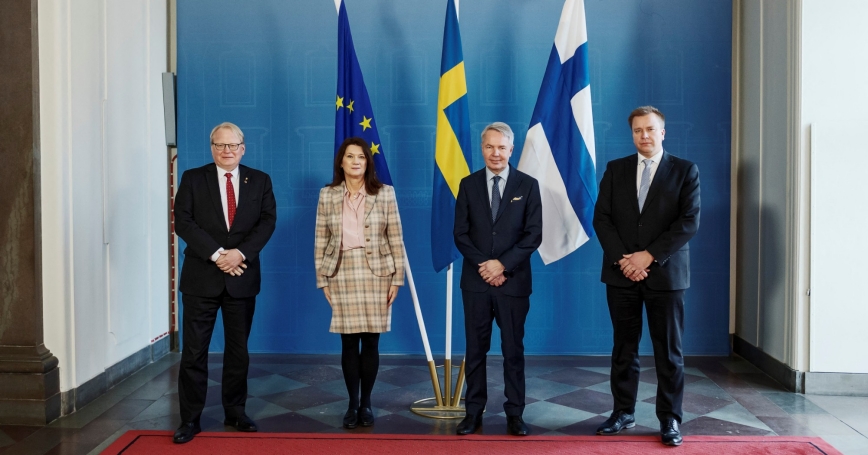 Both countries have a difficult cost-benefit calculation to make regarding NATO membership, accounting for Putin's potential retribution, both during the membership process and immediately after accession. But from a NATO vantage point, the case looks more straightforward: Adding Finland and Sweden would offer the alliance predictability in a time of uncertainty, first-rate military capabilities, and an injection of democratic values.

Traditionally, having a NATO membership option, but not exercising it, has been seen as a deterrent in both Stockholm and Helsinki; Russia fears an expanded NATO and may have been moderating its behavior in the Nordic-Baltic region as a result. Additionally, traditional thinking posited that Russian doubts about Finland and Sweden's participation would complicate Moscow's calculus in the event of a crisis. Putin's recent aggression and questionable rationality may fundamentally change this dynamic. Given the increasingly unpredictable security environment in Europe, the West would benefit from air-tight joint planning and consultation without having to continually stop and assess whether Finland and Sweden should be in the room or not.

The West would benefit from air-tight joint planning and consultation without having to continually stop and assess whether Finland and Sweden should be in the room or not.

The Finnish and Swedish militaries maintain first-rate capabilities and reputation. The Finnish Defence Forces can muster 280,000 troops within 30 days, with an army capable of independently defending its long border with Russia for an extended period of time. The recent selection of the F-35 as the Finnish air force's next multi-role fighter will continue to solidify the Finnish military as among Europe's most capable.

Sweden, though it has moved to increase defense spending only recently, also packs a powerful punch. Its littoral, air combat, and undersea warfare capabilities, among others, would be a major addition to NATO's deterrent and defense toolkit. Both militaries already maintain high levels of interoperability with NATO and could have a near-seamless transition from a military standpoint.

In the longer term, NATO could benefit from welcoming two of the world's most vibrant democracies into its ranks. Freedom House scores Finland and Sweden as 100 out of 100 in its global freedom ratings; by comparison, recent NATO entrants Montenegro and North Macedonia both come in at 67. NATO was founded both on hard security imperatives and democratic values; adding Finland and Sweden could help the alliance advance its Article 2 ambition of strengthening free institutions and encouraging economic collaboration.

The Swedish and Finnish governments also play influential roles within the EU, so an ancillary benefit could be stronger NATO-EU and U.S.-EU collaboration on a range of issues. Notably, both Sweden and Finland are involved in negotiations and strategy planning regarding competition with China, as well as the broader global contest between democracies and autocracies.

Accelerating the path for Finland and Sweden to join NATO would be an admittedly complex diplomatic endeavor. The Secretary General would need to gain the consensus, at least privately, from all 30 allies, and then instruct NATO headquarters and its strategic commands to prepare as short a transition time as possible. Fortunately, while recent accessions took years, Finland and Sweden would have a head start: Their commitment to NATO's democratic and free market principles are unquestioned. From a security and military standpoint, they already participate in major NATO exercises, contribute to the NATO Response Force, and are trusted with sensitive intelligence. There could still be a considerable timeline for ratification, but this too could be abbreviated given the ongoing sense of urgency in European capitals.

It would also be important to generate contingency options to deal with Moscow's potential reaction. Putin could respond with a range of steps, from the now-familiar toolkit of cyberattacks to interruptions to energy supplies to shows of force. But with the vast majority of Russia's attention and military resources dedicated to Ukraine, and an enhanced U.S.-European posture in Europe, the coming months may counterintuitively be a lower-risk environment for this initiative—tied up in Ukraine, Russia realistically could not flow troops for an attempted land-grab in either Finland or Sweden.

It would behoove leaders in Helsinki, Stockholm, and Brussels to have a number of contingency plans laid out before announcing a decision to join the alliance.

Still, the alliance would need to be ready for anything, and it would behoove leaders in Helsinki, Stockholm, and Brussels to have a number of contingency plans laid out before announcing a decision to join the alliance.

It seems unlikely either nation will make a move towards NATO in the coming days, but domestic deliberations on membership in the context of national elections this year in Sweden and next year in Finland will be inevitable. Joining is wholly their choice, but should the letter arrive from Helsinki and Stockholm, NATO could benefit from responding quickly.

Gene Germanovich is an international defense researcher at the nonprofit, nonpartisan RAND Corporation.

This commentary originally appeared on Breaking Defense on March 3, 2022. Commentary gives RAND researchers a platform to convey insights based on their professional expertise and often on their peer-reviewed research and analysis.