For Ukrainian Refugees in Poland, Livelihood Needs Will Follow Humanitarian Ones 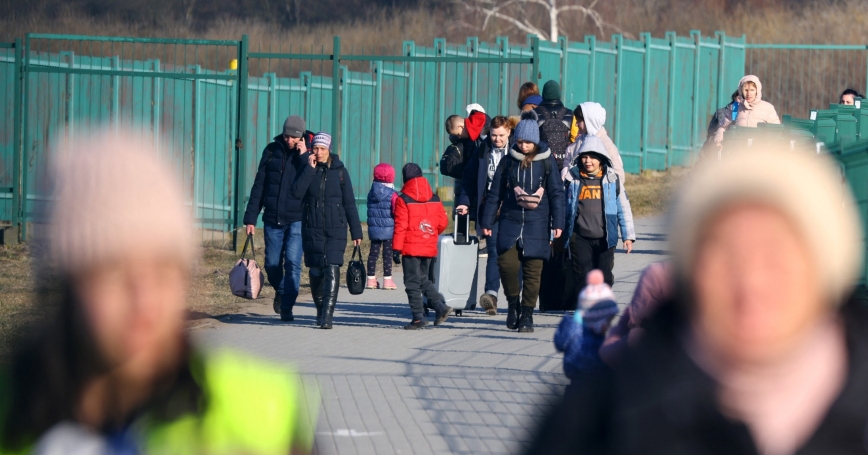 Refugees cross the border from Ukraine to Poland after fleeing the Russian invasion of Ukraine, at the border checkpoint in Medyka, Poland, March 18, 2022

Over three million Ukrainians have fled their country following the Russian invasion. This is the biggest displacement of people in Europe since World War II. Poland has accepted more than 2 million refugees.

Given the martial law in Ukraine, men between the ages of 18 and 60 are prohibited from leaving the country, which means many of the refugees are children and older people, making the need for humanitarian relief all the more urgent. Once these immediate needs are met, however, attention will invariably turn to options for younger refugees to learn, and of working-age refugees to earn a livelihood, become self-sufficient, and begin contributing to their host countries.

On the issue of livelihoods, in 2018 the nonprofit RAND Corporation published a large study on the labor market for Syrian refugees in Turkey, Jordan, and Lebanon. While the context and locations are different, a few of the findings could be relevant to the unfolding Ukrainian crisis, and might help Poland—and other host countries—prepare for future needs. The European Union's announcement that Ukrainian citizens can live, work, and get educational and medical benefits in member countries for up to three years without applying for asylum finds support in the RAND study, which found that most surveyed refugees were willing to work and were perceived as hardworking by host country firms. Countries such as Colombia have gone even further, offering temporary protection status for ten years to Venezuelan refugees. Such actions avoid the limbo in which refugees often find themselves when they are not officially permitted to work in the country where they are currently living.

Over three million Ukrainians have fled their country following the Russian invasion—the biggest displacement of people in Europe since World War II.

In Turkey, the RAND study found Arabic-speaking Syrian refugees had difficulty finding and keeping jobs due to the language barrier, and that language training programs were wanting. Only a small percentage of the Polish people speak Ukrainian and Russian, and providing expedient and practical language training to those seeking work might quickly become necessary. A recent World Bank study (PDF) of Ukraine, which focused on skills rather than the formal educational level of employees, notes that the skills of urban adults in Ukraine is higher than the average of most middle-income countries. But it also found that skill gaps limited the productivity of Ukrainian firms, and that postsecondary education lacked relevance to the labor market. Given these limitations, the RAND finding that job-relevant training was one of the greatest needs for refugees could also become important for Poland.

Matching refugees to available jobs will likely be a challenge. The RAND study found that there was a geographical mismatch of people and jobs, with a tendency for refugees to congregate in the biggest cities, even when the job needs were greatest in the second-tier ones. The study suggested the examples of Germany and Sweden (PDF)—both countries have programs to train refugees with job-relevant skills and then place them in firms in smaller cities—as a potential model for Middle Eastern countries to follow. These European examples could be even more relevant for Poland as it tries to balance workforce needs by geography, and the natural impulse for the current wave of refugees to move to where families and friends who entered the country during the 2014 conflict might already live.

Refugees are often likely to work in occupations that demand less skills and education than they actually have, and such “occupational downgrading,” has the potential to cause the lower-skill labor market to become congested and experience wage declines, as the experience of accommodating Venezuelan refugees in Colombia has shown. This expectedly draws protests from host country workers. Matching workers to jobs based both on geography and skills could avoid this strain to social cohesion. Relatively low unemployment rates in Poland during the pandemic and shortages of skilled workers could help in this regard, as could providing job training to host country workers who need it to avoid the perception of favoritism to refugees. Such strategies are likely to be both more humane and more effective at ensuring social cohesion than simply turning away refugees at the border, or keeping Black and Brown refugees from potential jobs.

Refugees are often likely to work in occupations that demand less skills and education than they actually have.

Additionally, the RAND study found that women refugees could benefit from their transportation and childcare needs being met in their quest for employment. Given the preponderance of women refugees from Ukraine, these considerations will become critical. Given those over sixty have been permitted to leave, accommodations for older workers—such as offering flexible work hours and matching those seeking work to age-relevant occupations— would also help.

Host countries such as Poland that accept refugees in great need are to be lauded for their humanitarian response, and for the public good they provide to the global community. To increase the likelihood that these host countries find effective policy solutions, they should view the influx of refugees not merely as a challenge, but as a significant opportunity to be seized for aiding their post-COVID recovery.

Krishna Kumar is vice president, International at the RAND Corporation.

This commentary originally appeared on Wszystko Co Najważniejsze on March 17, 2022. Commentary gives RAND researchers a platform to convey insights based on their professional expertise and often on their peer-reviewed research and analysis.