The Art of Sitting on Bayonets 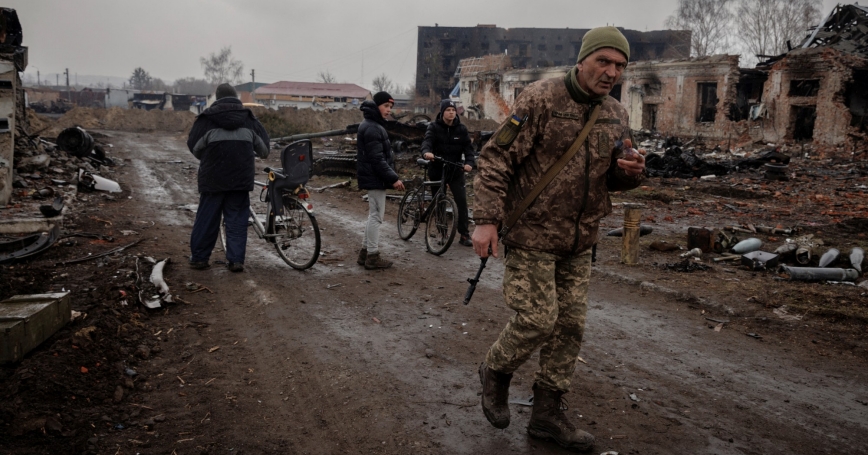 Prince Talleyrand, Napoleon's foreign minister, famously observed, “You can do many things with bayonets except sit on them.” Talleyrand would have spoken from experience: The brutal war in Spain that contributed the term “guerrilla” to the military lexicon and Francisco Goya's “Disasters of War” prints to its memorial. Napoleon had easily deposed the Spanish Bourbons, defeated their armies, and installed his brother as the King of Spain but discovered it was hard to rely on the French Army to keep him on the throne.

Like Napoleon in Spain, Russian President Vladimir Putin might have assumed that once conquered, Ukraine would be easy to hold. A lightning strike by 190,000 Russian forces would sweep into the capital, evict the Zelensky government, accept the defecting Ukrainian military, and lead to the installation of a compliant Ukrainian politician in the mold of the deposed Viktor Yanukovych. But there has been no lightning success, no defecting Ukrainian soldiers. Even if Putin seizes parts of Ukraine in the main force war with firepower and exotic weapons, any leader of a Russian-dominated portion would start off sitting on bayonets: relying solely on the power of Russian tanks, artillery, hypersonic missiles, and Kalashnikovs.

Wherever Russia has advanced in Ukraine, resistance now looms, so Russia's practice in the long game of counterinsurgency deserves more attention. The Second Chechen War is particularly worth scrutinizing to see how Putin operates.

The Russian military was humiliated in the First Chechen War of the mid-1990s. Having supposedly corrected many of those problems, in 1999 Russia invaded the small republic of a little over 1 million people with a comparatively huge force of about 80,000. It was Putin's first war as leader. The headline story was the Russian siege and destruction of Grozny, what the United Nations called the most destroyed city on Earth in 2003. But the subsequent insurgency phase was as important, and it lasted for years. The counterinsurgency's mix of cruelty and corruption rendered Chechnya “A Small Corner of Hell” in the late journalist Anna Politkovskaya's description.

Like Napoleon in Spain, Russian President Vladimir Putin might have assumed that once conquered, Ukraine would be easy to hold.

Early in the Chechen conflict, Akhmad Kadyrov, then the Mufti of the Chechen Republic of Ichkeria, defected to the Russian side. Kadyrov had been a prominent commander in the First Chechen War and had a personal militia that followed him over. Kadyrov didn't just sit on Russian bayonets; he brought his own. The Kadyrovite and other Chechen units soon demonstrated their effectiveness; they knew the terrain and people better, but they were also more ruthless. Their counterinsurgency tactics included kidnapping and direct threats to families. In June 2000, Putin appointed Kadyrov head of the concurrently established Administration of the Chechen Republic. From this position, Kadyrov vied for authority with the Russian military and not only waged war, but offered amnesties to those joining his forces, drawing thousands from the rebel ranks.

Over the next three years, there was real progress in “Chechenization” of the counterinsurgency operations as Chechen forces and leaders replaced their Russian counterparts. Putin rewarded Kadyrov with a staged election to make him the first President of the Chechen Republic. He took office in October 2003, but his reign was brief. There were still rebels, some quite skilled. President Kadyrov was assassinated on May 9, 2004 by a bomb concealed in a reviewing stand.

Ramzan Kadyrov, Akhmed's son, rose to power as acting prime minster (after reaching the constitutionally required age of 30, in 2007, he became president). He continued growing the pro-Russian Chechen forces such that by 2005 more than 20,000 Chechens were in Kadyrovite and other various security units. In a country of about 1.2 million, they provided a force ratio of 16.7 members per 1,000 inhabitants. They gave Kadyrov enough confidence to call for the removal of all Russian Federation forces. By 2008, the core Kadyrovite units themselves numbered over 10,000 and were increasingly regularized as were their brutal tactics.

In the years since, Putin has “Chechenized” the Russian forces in the sense of importing Chechen practices and even some units. Most recently, Putin established the Russian National Guard (Rosgvardyia)—more than 300,000 troops that report directly to him without an intervening civilian minister. There is an obvious “private army” element to this, but there is also a normalization of irregular formations from conflict regions, units that would probably be unwelcome in the Russian Armed Forces. A brigade of the Chechen National Guard (a component of the Russian National Guard) recently mauled in Ukraine was simply a Kadyrovite organization with new badges.

Moreover, Putin's predilection for tangled lines of authority to his miscellany of forces ensures nonunity of command below him. Different components often work at cross-purposes and subordinate leaders must seek Putin's adjudication of their disputes. This is seemingly an organizing “principle,” not a recognized problem. There is no real Russian counterinsurgency doctrine, just a succession of Putin decisions.

There is no real Russian counterinsurgency doctrine, just a succession of Putin decisions.

Putin then outsources the mobilization of those willing to serve a Russian-installed or -friendly regime to a local partner. This person isn't necessarily preselected. It could be a local leader exploiting religion, clan, tribe, language group, or mafia (if they can work at scale). In practice, this partner has a lot of discretion; Kadyrov has been enforcing sharia law over Russian law with apparently no protests from Moscow. Ultimately, the only test is can they produce the number of allies needed and execute the practices required to win the final phase if Russian firepower can set the initial conditions.

Analysts have already questioned whether Russia has enough troops to hold Ukraine even if they win the main force war. Indeed, if the 190,000 originally organized and equipped for the mechanized invasion—now depleted and battered—were spread over a reduced Ukrainian population of 40 million this would give about 4.8 soldiers per 1,000 inhabitants. That ratio is hardly larger than the Russian police presence in Moscow. There are not enough Russians to rule Ukraine by simply sitting on their own bayonets even in the areas the Russians are already present. They would need Ukrainians, indeed many Ukrainians, to help.

If this war never reaches the drawn-out counterinsurgency phase, all this may be moot. But even if Putin retains the south and eastern regions Russia now occupies, it still may well be he has wholly overestimated the number of potential Ukrainian collaborators or the availability of figures who can bring them forth. Putin himself is not that figure. If he can't find collaborators, Putin's chances of achieving even reduced ambitions in Ukraine may be dim indeed.