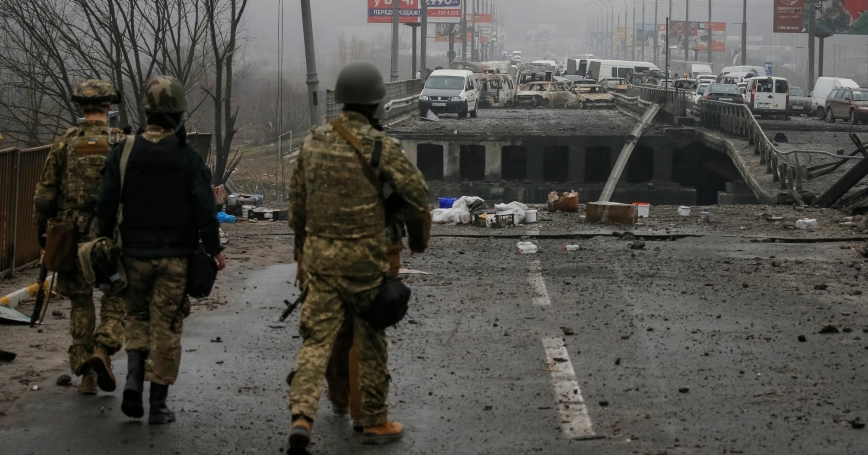 Ukrainian servicemen stand by a destroyed bridge as Russia's invasion of Ukraine continues, in the town of Irpin outside Kyiv, Ukraine, April 1, 2022

As the war in Ukraine creeps into its second month, perhaps the most common question is: How will it end? Ultimately, the answer comes down to three internal clocks—Ukraine's, which is counting down in years, Russia's, in months, and the United States and NATO's, which is stalled at the moment but could restart quite quickly.

Ukraine's clock revolves around how long it will continue to fight. Ukraine successfully blunted Russia's ground offensive, which has led Russia to adopt a strategy of punishment, indiscriminately bombarding cities to try to break Ukrainian will. In Mariupol, an estimated 80 percent of the houses have been destroyed. While official civilian casualties still estimate a number in the hundreds, the fluidity of the situation may mean that the true death toll is much higher. Ukraine's military losses are similarly hazy. Officially, the Ukrainian government admits that thousands of its soldiers have been killed in the fighting. This, too, could be an underestimate.

And yet, history suggests that Ukraine's clock could run on for years. Great Britain endured nine months of German area bombing during “the Blitz,” between September 1940 and May 1941, at the cost of 43,500 civilians. North Vietnam lasted through a decade of American bombing despite suffering the killing of tens of thousands of civilians. And most recently, the Syrian civil war claimed over 600,000 lives and yet, the war went on for years. Time and again, populations have shown the willingness to fight on, against the odds, if they believed could win—or at the very least felt they had no other choice but to persevere.

History suggests that Ukraine's clock could run on for years.

Ukraine does not run the risk of running out of military wherewithal to continue, either. Twenty-five countries—including the United States, most of Europe, Canada, Japan, Australia, and South Korea—have already sent billions of dollars' worth of military equipment to Ukraine. There is no sign of such support diminishing. If anything, two-thirds of the American public want the United States to “do more to help the Ukrainians fight Russia,” and the Biden administration's budget request includes another $6.9 billion in aid to Ukraine and to bolster NATO.

Then there is Russia's clock. When will it decide to end its aggression in Ukraine? For Putin and the ruling elite, the question may revolve around when the Ukraine war risks a significant enough backlash that it threatens their hold on power. Already, cracks are emerging. Russia has arrested thousands of anti-war protestors. A number of higher profile Russians—from a television producer to a Nobel laureate to, potentially, Russian cosmonauts—have expressed opposition to the conflict. As sanctions hobble the Russian economy, everyday Russians will increasingly feel the impact of the Ukraine war.

To what extent this unrest affects the Kremlin's calculus, given the authoritarian nature of the regime, however, is less clear. Putin may view any acquiescing to anti-war sentiments, thereby showing even a hint of weakness, to be as much of a threat to his survival as continuing the war. While sanctions may increase domestic discontent, they may also produce a “rally around the flag” effect as Russians blame the West—rather than Putin—for their predicament. And as Iran, Cuba, and North Korea demonstrate, authoritarian regimes can survive for generations even under the harshest of sanctions.

Russia's military clock is more measurable than its domestic political one, and likely numbers in mere months. Russia has already lost between 7,000 to 15,000 of its original 150,000 soldiers, and over 10 percent of its initial combat power. As a rule of thumb, military strategists consider units that lose 30 percent of their original strength combat ineffective. While Russia has sizeable military reserves, many of these soldiers are conscripts, and unevenly trained and equipped. Russia can look to Belarus, Syria, or mercenaries, but it is less clear how interested any of these groups are in joining the conflict. And if Russia cannot make good on its losses, it risks exhausting itself.

Finally, there is the United States and NATO's clock about whether and when to intervene. The Biden administration has ruled out military action in Ukraine. So far, the American and European publics agree. Accordingly to polling, roughly a third of Americans support employing military force. European public opinion is similar. This is hardly the overwhelming public support needed before a politician risks war with a nuclear armed adversary such as Russia.

The question, of course, is whether public opinion will change. As Russia kills more Ukrainian civilians, the calls for intervention on humanitarian grounds may tick up. At the same time, some Americans may lose interest as the conflict drags on. Given these countervailing trends, it's hard to see how the conflict, given its current trajectory, will build sufficient popular support for the United States to enter the war.

It's hard to see how the conflict, given its current trajectory, will build sufficient popular support for the United States to enter the war.

If Russia escalates its attacks dramatically, however, this could end up being a very different story. The United States and NATO's clock might speed up significantly. Russian airstrikes have already struck near the Ukrainian-Polish border as Russia attempts to intercept Western weapons, and President Biden has promised that “the United States and our Allies will defend every inch of territory of NATO countries with the full force of our collective power.” Polls suggest that Americans overwhelmingly back this call to action.

Russia has repeatedly threatened to use nuclear weapons, chemical weapons, and other weapons of mass destruction. If that were to happen, the United States would face a crucial choice: respond, or risk normalizing the use of such weapons in warfare. In fact, Biden has said that Russian use of these weapons “would trigger a response,” although he did not specify what exactly that would entail.

Ultimately, the Ukraine war's three clocks force the United States into a delicate balancing act: Keep enough pressure on Russia such that its clock continues to count down quicker than Ukraine's, but not so much pressure that the Kremlin feels forced to gamble on resurrection and escalate its attacks dramatically. Unfortunately, striking that equilibrium is not as simple as running out the clock, but rather requires significant finesse, adjusting the response to changing facts on the ground. How those odds play out may determine Ukraine, and Europe's, fate.

Raphael S. Cohen is a senior political scientist and the director of the Strategy and Doctrine Program, Project AIR FORCE at the nonprofit, nonpartisan RAND Corporation.

This commentary originally appeared on The Hill on April 1, 2022. Commentary gives RAND researchers a platform to convey insights based on their professional expertise and often on their peer-reviewed research and analysis.