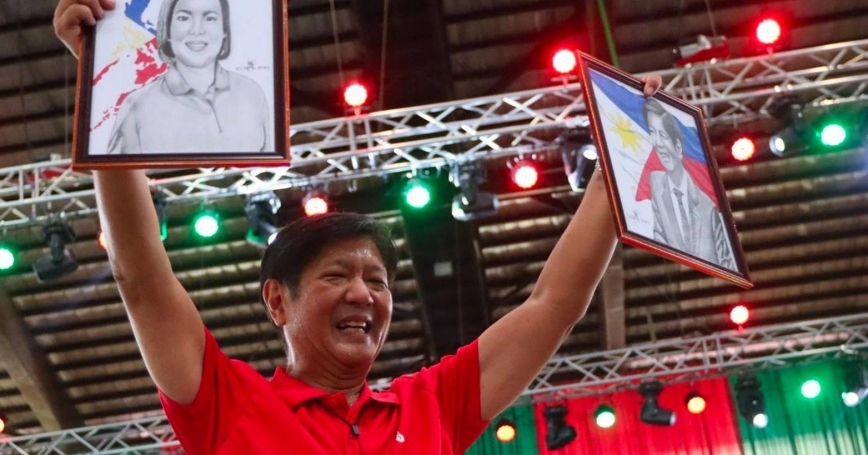 Bongbong Marcos during a campaign rally in Manila, Philippines, May 7, 2022

Monday's all-but-official election of Ferdinand Marcos Jr. to become the next president of the Philippines will hold significant implications for Manila's foreign policy. Marcos, known as Bongbong, is likely to be influenced by the policies of both his father, former dictator Ferdinand Marcos, and his predecessor, Rodrigo Duterte, yielding a new government interested in engaging China while keeping the United States close by. Marcos has consistently lauded his father's achievements, one of which was maintaining a strong security alliance with Washington in spite of bilateral frictions, and he is politically aligned with Duterte, who sought to pivot away from the United States to China. Thus, over his term of six years, Washington should expect a kind of Duterte-light leader who is China-friendly but who does not have the expressed intent, as Duterte did, of dismantling the Philippine-U.S. alliance. Indeed, he might even bolster it if Beijing's assertiveness in the South China Sea continues to rise.

Because Marcos refused to participate in most presidential debates during the campaign and did not release any official foreign-policy statements, analysts have largely been forced to read the tea leaves to determine his exact position. He did, however, participate in one major debate and a few media interviews this year that covered foreign policy at length. On these occasions, Marcos's responses to questions on Philippine foreign policy offer the clearest sense of what he will look to achieve on foreign policy when he takes over from Duterte on June 30.

At the very highest level, Marcos, like every Philippine leader, seeks to maintain his country's national interests regardless of deepening U.S.-Chinese competition. During the debate, he said: “No matter what the superpowers are trying to do, we have to work within the interest of the Philippines. We cannot allow ourselves to be part of the foreign policy of other countries. We have to have our own foreign policy.” This statement suggests that he envisions Manila as neither wedded to the alliance with Washington nor forging a new partnership with Beijing. Rather, he wants to steer a middle path to navigate intensifying great-power competition. By contrast, Duterte, on his first trip to China not long after his election, famously announced it was “time to say goodbye” to Washington. Despite his political alignment with Duterte, Marcos probably won't be choosing a side.

Marcos, like every Philippine leader, seeks to maintain his country's national interests regardless of deepening U.S.-Chinese competition.

Regarding what he hopes to achieve on China policy, Marcos underscored in the debate that the Philippines is in a “hot spot” when it comes to geopolitics. However, he also argued that Manila “will not cede any one square inch to any country, particularly China, but will continue to engage and work on our national interest.” Marcos's resolve to defend Philippine national sovereignty and territorial integrity against China in the South China Sea—where the two nations have many overlapping claims and have increasingly been at loggerheads in recent years—is striking relative to Duterte's unabashed pro-China stance on these challenges early on in his tenure. For instance, it took Duterte's government four years to finally acknowledge the 2016 Permanent Court of Arbitration ruling in Manila's favor on Beijing's expansive claims in the South China Sea—a victory not just for the Philippines, but for international law and norms of maritime behavior. Marcos has been neutral on the ruling itself, simply stating that because China rejected participating in the arbitration in 2013, “it's no longer available to us.” This should not be interpreted as a rejection of the ruling but a recognition of the difficulties in enforcing it without Beijing's cooperation.

Although it is well known that Marcos and his family maintain close ties to the Chinese Communist Party, the new president has also voiced concern over China's rising assertiveness against the Philippines in the South China Sea. During the debate, he noted, “It should not be hard to point out to China that our fishing boats are not a military threat to them, so why should they deploy warships there? But we have to respond. If it happens again, we can send the Navy or even Coast Guard, so there's a military presence … a presence of the state in that area.” The fact that Marcos highlighted the need for “a presence of the state” in disputed areas strongly suggests he seeks to leverage the U.S.-Philippine alliance to deter China, since any attack on Philippine state assets would necessarily trigger the Mutual Defense Treaty. Washington's policy on this point has been consistent for years.

During the debate, Marcos also argued for showing resolve in the South China Sea. He said the objective “is to show to China that we are defending what we consider our territorial waters and [the objective] is not to fire upon the Chinese vessels.” He further contended that Manila needs to “make [the Chinese] aware that we know what they are doing and we don't agree with what they are doing, and we carry on with our diplomatic channels, other channels, to fix the problem so it won't happen again.” Yet again, Marcos's statements on China are far more hawkish than Duterte's were, both early on and throughout most of his tenure.

On the U.S. alliance, Marcos has likewise distinguished himself sharply from Duterte. In answering a question at the debate, he noted, “Our relationship with the United States is not something to be cavalier about.” He further referred to the alliance as “a very important one.” He argued that the alliance “has stood us in good stead for over a hundred years and that will never disappear from the Philippine psyche, the idea and the memory of what the United States did for us and fought with us in the last war.” Marcos's intentions appear to be the exact opposite of Duterte's, who sought to systematically dismantle the alliance, one agreement at a time—including the Visiting Forces Agreement, the Enhanced Defense Cooperation Agreement, and even the Mutual Defense Treaty itself. That is a good thing for Washington and almost certainly represents a nod to the elder Marcos's prioritization of the alliance. Indeed, the days of dredging up the United States' dark colonial legacy in the Philippines may end with Duterte's tenure.

To be sure, Marcos, like Duterte, may still wish to explore renegotiating certain aspects of the alliance. During the debate, he noted, “I think any of these agreements we should, of course, encourage as long as it is very clear to us: What is the advantage for the Philippines?” Hence, it is possible that Marcos's future defense secretary, whoever he or she may be, will follow in the footsteps of outgoing Defense Secretary Delfin Lorenzana, who repeatedly called for a “review” of the Mutual Defense Treaty. But if Marcos's government does launch a review process, it will likely be in good faith to improve Manila's benefits within the alliance rather than trying to find ways to terminate it. Either way, Marcos is unlikely to seek U.S. support against China unless absolutely required. In one interview, he said, “The problem is between China and us. If the Americans come in, it's bound to fail because you are putting the two protagonists together.”

Unlike Duterte, Marcos appears to highly value the U.S. alliance.

Marcos's hesitance to involve the U.S. military in future potential conflicts with China should not be a source of concern in Washington. Unlike Duterte, Marcos appears to highly value the alliance. In fact, he might be arguing for Manila to do more on its own—a development, if it comes to pass, that should be embraced by Washington. It would fit neatly into the Biden administration's strategy of so-called integrated deterrence, in which U.S. allies and partners work together to deter China and other adversaries, such as Russia.

Of course, all these statements are just that—statements. Marcos will have to match his words with deeds in the coming years to demonstrate that he actually plans to defend Philippine sovereignty against China and prioritize the U.S. alliance. It is likely he will do both, not least because of the overwhelmingly pro-U.S. sentiment among the Philippine population, the military leadership, and other constituencies. These basic facts of Philippine politics—coupled with Beijing's rising assertiveness against Manila's interests in the South China Sea, which shows no signs of abating—made Duterte's pro-China gambit politically dead on arrival. Hence, Marcos is likely to tweak Duterte's foreign policy just enough to avoid the same pitfalls and maximize the strategic benefits to the Philippines.

This commentary originally appeared on Foreign Policy on May 10, 2022. Commentary gives RAND researchers a platform to convey insights based on their professional expertise and often on their peer-reviewed research and analysis.