Do Americans Know Who Their Diplomats Are? Or What They Do? 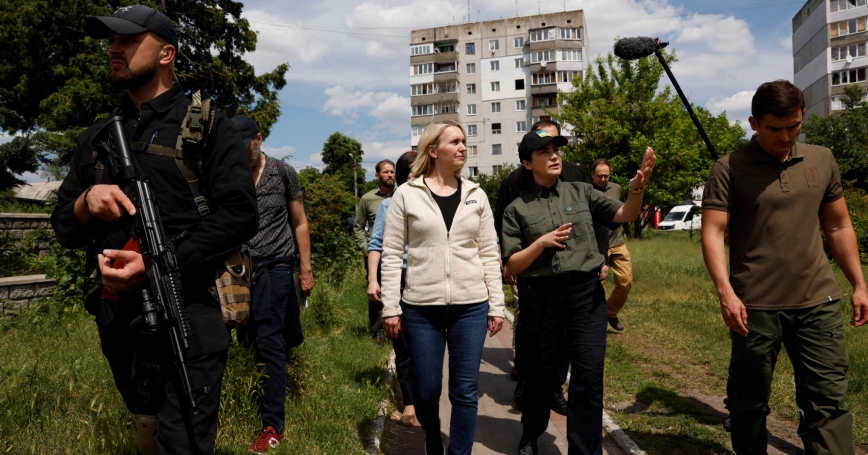 Ambassador Bridget Brink took up her new post in Kyiv on May 30 as the U.S. ambassador to Ukraine. There, she will reopen a U.S. embassy in a nation still under attack and act as a key, on-the-ground representative of American interests to the government and people of Ukraine. Before her appointment to this critical job, few Americans will have heard the name Ambassador Brink, although she has served in Cyprus, Serbia, Uzbekistan, Georgia, and Slovakia, among other assignments in her 26 years of service.

The same can be said of the thousands and thousands of other diplomats who have dedicated their careers to protecting American citizens and interests in far-flung places with skill and dedication, without much in the way of recognition or understanding from their fellow Americans.

An interest in understanding Americans' views on American diplomacy and diplomats—how they are selected and trained, what it is that they do—formed the basis of a new report, undertaken with the support of the Una Chapman Cox Foundation and conducted by the nonprofit RAND Corporation. The report details the results of two surveys in which a nationally representative sample of more than 2,000 American adults answered questionnaires in two successive years, 2020 and 2021. In between the surveys, we ran several focus group sessions that probed some of the survey questions more deeply.

What we found was that although public opinion toward American diplomats was generally favorable, regardless of personal political ideology, Americans have a limited understanding of how diplomats are selected, and how diplomacy interacts with other elements of America's national security establishment. Still, a strong and consistent majority—more than 65 percent in both nationwide surveys we conducted—said that they thought diplomacy contributes to national security. There was a two-to-one preference among participants for diplomats to lead in foreign policy, rather than the military. Participants also said they felt that diplomats would be better at enabling the nation to both negotiate differences between nations and to avoid armed conflict.

Our findings also suggest that if the public were given more context regarding the relative size of funding for the State Department compared to the U.S. military, they would support an increase in State Department funding—with the implicit understanding that more funding would improve the department's ability to fulfill its mission.

Indeed, when survey respondents were given this context—that the U.S. military receives some 15 to 20 percent of the federal budget, compared to the State Department's 1.2 to 1.5 percent—there was a 36 percent increase in support for increasing State Department funding. This suggests to us that a greater effort to inform the public on funding levels, as well as transparency on how taxpayer funds are used, would lead to greater public support for such outlays.

Americans have a limited understanding of how diplomats are selected, and how diplomacy interacts with other elements of America's national security establishment.

One consistent theme in the findings was that the less respondents knew about what diplomats do, the less likely they were to report a “favorable” or “very favorable” perception of them. We also learned that the American public had greater confidence in career ambassadors rather than political appointees. However, American diplomats, while generally viewed as trustworthy, were thought by 38 percent of respondents to be politically biased, regardless of their own political ideology.

Perceptions of the most important functions of diplomats overwhelmingly prioritized helping U.S. citizens abroad, compared to accomplishing broader national goals. In our surveys, participants were presented with a list of nine items (such as “help U.S. citizens in trouble,” “negotiate treaties and agreements,” and “advance American interests with foreign governments”) and were then asked to rank these items in order from what they believed were the most important functions of diplomats to the least. While 85 percent of respondents included helping citizens abroad as a primary function, advancing American interests was next most frequently cited—by 40 percent of respondents. Only 19 percent of respondents included “promote U.S. values” among their top three selections.

In the focus groups, we found participants often interpreted “values” differently. Some said that they considered values to be a politically “loaded term,” or that it could mean imposing certain ways of thinking that might not be welcome in all countries. But once they better understood just what was meant by core U.S. values, and how diplomats go about promoting those values, there was a near tripling of support.

This finding was replicated in the second survey in which we included a new question asking participants whether they believed that “democracy, freedom, human rights, and the rule of law” were core American values and, if so, whether promoting such values was an important diplomatic function. To this, 56 percent of respondents agreed or strongly agreed. It's the inverse of the finding that the less folks know about the job of a diplomat, the less they support the work; in this case, the more people know and understand about diplomacy, the more they support it.

Efforts to better inform and engage the American public about the work of diplomacy and who American diplomats are would lead to a greater understanding of the job and its people.

People seem quick to grasp a fundamental aspect of diplomacy—that it must often be done the old-fashioned way, in-person, by building relationships. Despite the current ubiquity of virtual meetings and social media, in every in-depth focus group discussion, participants endorsed the idea that in-person diplomacy would continue to be important, perhaps even more important, in the future.

The overall implication of the survey is simple: Efforts to better inform and engage the American public about the work of diplomacy and who American diplomats are would lead to a greater understanding of the job and its people—which would, in turn, most likely lead to broader public support. Indeed, such outreach efforts have been floated by both the current secretary of state and his predecessor, proving that they are not simply useful but broadly supported as well.

Michael Pollard is a senior sociologist at the nonprofit, nonpartisan RAND Corporation and professor at the Pardee RAND Graduate School. Charles Ries is an adjunct senior fellow at RAND and a former State Department official.

This commentary originally appeared on The Hill on June 18, 2022. Commentary gives RAND researchers a platform to convey insights based on their professional expertise and often on their peer-reviewed research and analysis.