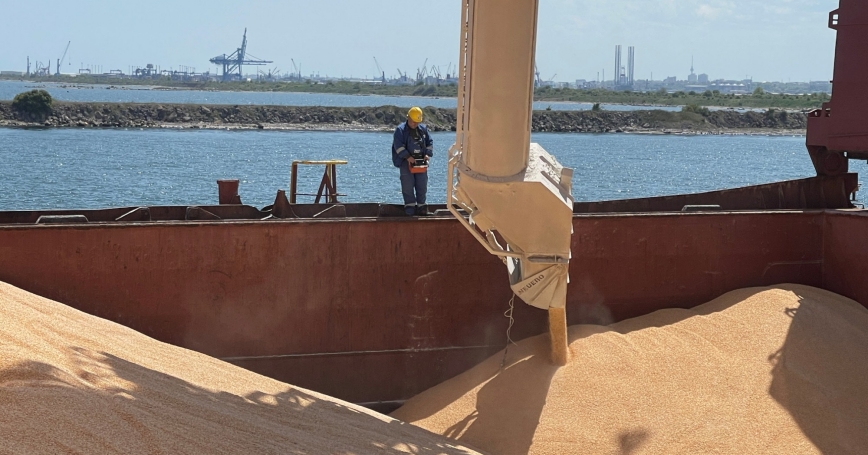 Grains are loaded in a special transport cargo bound for Egypt, in the Black Sea port of Constanta, Romania, May 11, 2022

by Bradley Martin and William Courtney

The international community has a strong interest in averting famine in poor areas caused by shortages of grain from Ukraine. By blockading ports around Odesa, Russia threatens this interest. Navies of willing countries could implement a naval escort mission at what might be acceptable risk and cost. Russian cooperation might be sought but may not be essential.

In the 2020-2021 season, Ukraine was the world's fourth-largest grain exporter. Exports in May were more than 60 percent lower than a year ago, even as global hunger hit a new high. Some 22 million tons of grain in Ukraine could rot if not exported soon.

On May 18, United Nations Secretary-General António Guterres said he saw no “solution to the food crisis without reintegrating Ukraine's food production … Russia must permit safe and secure export of grain.” On June 1, Pope Francis appealed for an end to the blockade, saying the grain ought not be used as a “weapon of war.”

International pressure may be having an effect. President Vladimir Putin has claimed that Russia is ready to “facilitate unhindered sea transit of goods in coordination with Turkish partners … (including) export of grain from Ukrainian ports.” But, if such unhindered transit could not be quickly negotiated, how might the international community respond?

The impact of a continued blockade may be so dire that countries in and beyond the Black Sea region may feel compelled to act. They could marshal warships on a cooperative basis to escort grain shipments between ports around Odesa and the Turkish Straits.

The risks of such an operation are not so formidable. While Russia has considerable ability to find and target shipping in the Black Sea, the window of vulnerability is relatively short. Transit along the western edge of the Sea to the Turkish Straits is only 388 miles, and transit remains in or near territorial waters of Ukraine and NATO allies. Russia's ability directly to interdict this shipping may be limited.

The impact of a continued blockade may be so dire that countries in and beyond the Black Sea region may feel compelled to act.

If Russian intercepting vessels were to attempt to board or approach merchant ships at close range, they could be within range of Ukrainian shore batteries and aircraft. If instead Russian forces tried to attack from a distance with shore- or warship-launched munitions, they could have limited means of carrying out intelligence, surveillance and reconnaissance of targets. Thus, they may launch weapons indiscriminately. This could result in accidental attacks on Romanian or Bulgarian ships, including in their own territorial waters, and a large-scale expenditure of guided munitions for uncertain effect.

Thus, while Russia might be able to find or engage ships, its ability to sustain a blockade is not certain. This is particularly true if merchant ships receive warship escort. Crucially, any modern navy with reasonably capable air defense ships could protect shipping along the western edge of the Black Sea from a range of Russian air and missile threats. And any navy with patrol boats or small combatants could perform simple escort functions, offering some level of protection and maritime awareness.

The western Black Sea is mined by Ukraine to forestall amphibious assault and by Russia to prevent Ukrainian transit. Maritime insurers may mistrust any Kremlin assurances about transit safety. Underwriters might already be charging a war-risk premium of up to 10 percent of a vessel's value.

There is no evidence that Russia has laid dense or difficult-to-penetrate minefields. A sparsely laid minefield can do damage and have psychological effect. But such threats are not an effective way to stop shipping, particularly if countermeasures are applied.

Therefore, Russia could have a difficult time interdicting grain-carrying vessels in the western Black Sea. It could resort to missile attacks without accurate targeting, but they may not reliably hit intended targets. Interdiction could be even more challenging if the global community voiced strong opposition and international navies joined in a humanitarian escorting mission.

Bradley Martin is senior policy researcher at the nonprofit, nonpartisan RAND Corporation and a retired director of the RAND National Security Supply Chain Institute. He retired from the U.S. Navy as a surface warfare captain after 30 years of service, including four command tours. William Courtney is an adjunct senior fellow at RAND and was U.S. ambassador to Kazakhstan.

This commentary originally appeared on The Hill on June 15, 2022. Commentary gives RAND researchers a platform to convey insights based on their professional expertise and often on their peer-reviewed research and analysis.