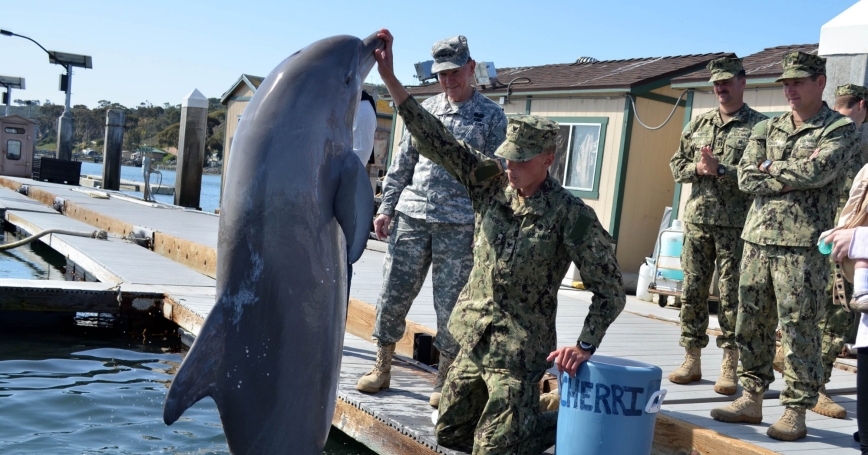 In an age of digital wonders and mechanical marvels, the mine-hunting abilities of the dolphin remain unmatched by human ingenuity. These creatures have long been a critical component of the Navy's suite of mine countermeasure capabilities.

Yet budget cuts could spell the end of the program, which began around 1960 after the first dolphin was trained in mine detection. President Kennedy took to the idea of using sea creatures for military purposes, so the program was expanded.

The highly skilled dolphins make the seas safer for naval ships and other vessels. Yet Pentagon budget cutters have been chipping away at funding for the program since last year. In the Navy's budget request for the coming fiscal year, funding for the dolphin team has been slashed by $6.6 million—to less than $1 million (PDF).

With their ultrasensitive “biological sonar,” dolphins can precisely locate mines from the upper reaches of the water column down to the seafloor or even beneath it if a mine is buried in the mud. To report the presence of mines to their human handlers, the dolphins are trained to tap paddles attached to a boat or dock, then are given devices to mark the mines' locations, enabling elimination of the threat.

During exercises, dolphins almost always locate every mine assigned to them, in addition to previously undiscovered mines from World War II.

Their accuracy is legendary. During exercises, dolphins almost always locate every mine assigned to them, in addition to previously undiscovered mines from World War II. One time dolphins located a missing uncrewed undersea vehicle after other such vehicles had failed to locate it during exercises off the Virginia coast.

Environmental and animal rights groups have raised questions regarding the animals' welfare. However, these dolphins, like the military's explosive-sniffing dogs, are well-treated, according to the U.S. Undersea Naval Museum. Their handlers encourage the dolphins to find objects through praise, petting and treats, tossing them fish when they find something. No punishment is used.

While they operate in the vicinity of explosive devices, no mine-hunting dolphin has ever been harmed by a mine. Mines are designed to detonate when they experience the massive concussive force of a ship or when they sense a ship's magnetism and characteristic sounds, none of which a dolphin could conceivably replicate.

In recent years, critics have argued that uncrewed undersea vehicles can fully match the dolphins' capabilities—so the dolphin program should be eliminated. It is true that the vehicles are becoming increasingly capable as their autonomy, navigational systems, sensors, and other systems continually improve.

But keeping the dolphins on the payroll as a complement to uncrewed undersea vehicles makes sense.

However, they are also vulnerable to environmental impediments that dolphins easily overcome, such as strong currents, thick seaweed, and confined waters. Dolphins complement the high-tech mine-hunters in challenging environments, bringing keener detection and classification abilities, particularly against mines that are partly or completely buried.

But the Pentagon budget watchers dismiss the animals as too difficult to deploy, given that they are substantially bigger than humans, and need to be kept wet and continually provided with fish to eat. However, they have repeatedly been deployed around the globe. Between missions, they can be sheltered in enclosures along docks or even in tanks aboard large ships.

Critics also argue that because the dolphin handlers are civilians who are not subject to military orders, they may not be willing to deploy in wartime. That has not been the case. Dolphins and their handlers have repeatedly contributed in war zones, including in Operation Iraqi Freedom in 2003 and the Vietnam War.

Eliminating the dolphin mine-hunting program would save the Navy $7 million annually. In contrast, the Navy has spent $131 million over the last three years to acquire 10 of the newest uncrewed undersea vehicles that would replace the dolphins—and that does not include operational costs.

Rather than one system being viewed as a replacement for the other, the two can work together: The vehicles can sweep wider areas at lower levels of fidelity, and dolphins can provide focused capabilities in specific environments or when higher accuracy is needed. Making the sea safe from mines is well worth the investment in animals and technology. Restoring a multibillion-dollar fleet's freedom of movement during wartime by reducing the mine threat has proved critical.

A single mine blast can incapacitate or even sink a warship costing billions of dollars. The cost of repairing a mine-damaged warship that manages to stay afloat can reach into the millions, and the warship remains unusable for months. Mine-hunting benefits extend to civilian ships, which are able to enter key areas and avoid mine damage to deliver food, fuel, and other essential goods around the world.

Someday, the machine may be smart enough to replace the mammal in mine-detection missions. But not yet.

Scott Savitz is a senior engineer at the nonprofit, nonpartisan RAND Corporation, where his extensive research for the Navy, Coast Guard, and other military services includes naval mine warfare.

This commentary originally appeared on Los Angeles Times on July 22, 2022. Commentary gives RAND researchers a platform to convey insights based on their professional expertise and often on their peer-reviewed research and analysis.