A New Era? NATO's Prioritisation of Human Security in an Insecure World 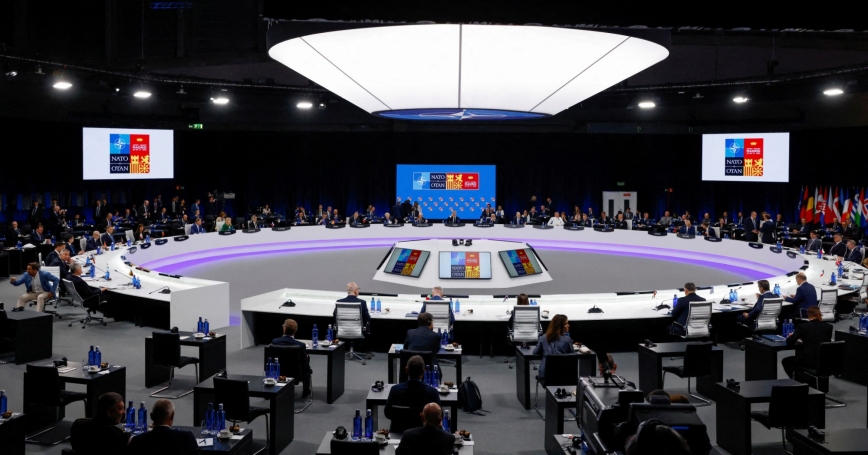 by Kaleigh Heard and Kristin Thue

With Russia's invasion of Ukraine playing out in the background of NATO's recent Madrid Summit, a strategic shift within the alliance may have gone unnoticed. Human security, and the alliance's role and responsibility to protect civilians during conflict saw new prioritisation in the alliance's new Strategic Concept. Yet, despite this significant shift, the alliance may have missed an opportunity to spell out how these vital commitments could operate in practice. While new commitments see NATO furthering its human security efforts across alliance activities and mainstreaming these approaches, the reality remains that these commitments can appear vague and open ended, suggesting there is much to be desired in terms of specific direction that NATO forces are required to operationalise and implement.

The second-most important document in the alliance's policy framework after its founding treaty, the 2022 Strategic Concept replaces the previous Strategic Concept adopted in 2010, and charts a new path forward for the world's largest military alliance. Moving from an era typified by security and stability in Europe and long-distance deployments, to one typified by instability at home, the aftermath of the COVID-19 pandemic, and the fall of the Afghan government and the Russian invasion of Ukraine, NATO's mandate—to ensure the collective defence of its allies through deterrence and defence, crisis prevention and management, and cooperative security—could be nearing a defining moment.

Recognising that the world is contested and unpredictable, that the Russia-Ukraine war has changed the security landscape of Europe and the wider world, and that the persistent threat of terrorism and instability worldwide continue to influence the future security environment, the new Concept places emphasis on charting a different approach—recognising the ways in which nontraditional sources of insecurity directly influence these core threats. Human security, climate change, and the Women, Peace, and Security agenda—long seen as sideline issues or strategic spoilers within the alliance—are front and centre in the new concept document; a significant win for civil society and humanitarian organisations that have been pushing for NATO to recognise its responsibilities in these spaces for years.

Human security is defined as both a concept and an approach that assists national and international actors in identifying and addressing widespread and cross-cutting challenges to the survival, livelihood, and dignity of their people.

Human security is defined as both a concept and an approach that assists national and international actors in identifying and addressing widespread and cross-cutting challenges to the survival, livelihood, and dignity of their people. Generally encompassing issues including economic, food, health, environmental, personal, community, and political security, the concept has long been the domain of national governments, humanitarian actors, and international human rights institutions, while largely considered strategic spoilers by militaries which operate amongst (and whose operations might sometimes exacerbate) human security issues. Though NATO has not yet adopted a definition of human security, its work in this space over the past decade has focused on five cross-cutting topics: protection of civilians, children and armed conflict, conflict-related sexual violence, human trafficking, and cultural property protection.

In the previous iteration of the Strategic Concept released in 2010, human security issues were not considered by the alliance at all, despite NATO forces consistently encountering the strategic and operational impact issues such as civilian harm, human trafficking, forced migration, and cultural property protection had on their operational effectiveness. In contrast, the 2022 Strategic Concept contains multiple mentions of human security, not only in the margins, but at the core of the document itself. This not only likely reflects a shift in mindset amongst allies at the political level, but of the internal progress that NATO has made on these issues. It may represent a defining moment for how the alliance thinks about security and how to maintain it, particularly as conflict and instability creep closer to its own citizens.

The Strategic Concept has also recognised the deep connection between national and collective resilience and the role human security plays in advancing these concepts, arguing that human security is not only an issue to confront during crisis prevention and management, but across all its core tasks. While a seemingly small shift in thought and language, the importance of this inclusion may be particularly consequential. By recognising this connectivity, NATO allies have placed human security at the heart of all of NATO's work, including what are perceived as traditional defence tasks—setting a standard for human security to be taken seriously and prioritised across all NATO activities, including Article 5 operations and warfighting scenarios.

These shifts may have been driven by the Russia-Ukraine war, and to a lesser extent, the fall of the Afghan government last August. The dramatic crumbling of the Afghan government, and with it the democratic governance and human rights Afghans had enjoyed over the last two decades, in many ways, laid bare the shortfalls of NATO's approach to stabilisation. In contrast, the Russian invasion of Ukraine, the first war directly threatening the Euro-Atlantic area in decades, may have demonstrated the centrality of these issues even when fighting an all-out war. As missiles rained down on civilians in Kyiv, NATO commanders may have begun to witness the oft-touted military wisdom—that human security issues do not represent central strategic concerns during warfighting operations—refuted in real time. In short, Ukraine, and the response of Ukrainians may have demonstrated that human security and, in particular, the protection of civilians may matter just as much when fighting Russia in Mariupol as it does when trying to win hearts and minds in Helmand.

The shifts seen in the new concept appear significant and it could be a mistake to undervalue them. The centrality of human security issues in the Russia-Ukraine war may say much about the importance of mainstreaming human security commitments into all of NATO's core tasks and this new concept appears to have made some progress on this front. In particular, the inclusion of civilian harm mitigation (CHM) (PDF) in the Strategic Concept may be particularly important following on years of international efforts to ensure NATO forces account for and mitigate the harm they cause to civilian populations during conflict. When contrasted with the sentiments of a NATO tactical commander I encountered three years ago, who argued that human security issues would never be a priority in a warfighting scenario, the recognition of the centrality of human security issues to all of NATO's core tasks seems particularly significant.

Yet, commitments to CHM are only referenced in the new concept with regard to crisis management operations, and thus, there may be critical limitations. Without specific commitments to protect civilians that extend into deterrence, defence, and collective security missions, the imperative to mitigate civilian harm may struggle to be viewed as of strategic importance during Article 5 operations and warfighting missions. The concept is also quiet on the ways in which proactive and preventative action could contribute to protecting human security. It also lacks a connection between its commitments to human security and the key role it plays in achieving operational effectiveness and mission success and doesn't spell out how the alliance envisages this being translated into operational plans and tactical action by military forces. The lack of direct instructions for commanders to embed human security priorities and consider second- and third-order effects could create a gap for generating buy-in at the operational and tactical levels. As one NATO commander noted, “I want myself and my teams to be directly tasked to prioritise human security requirements” or else it is unlikely to occur in the face of other priorities.

While significant strides have been made across NATO's five human security pillars in recent years, progress has often been slow, disjointed, and difficult to operationalise internally and amongst NATO allied forces.

Lastly, while significant strides have been made across NATO's five human security pillars in recent years, progress has often been slow, disjointed, and difficult to operationalise internally and amongst NATO allied forces. Renewed efforts, including adopting a definition of human security, developing a human security action plan, as well as introducing robust structures that can operationalise these plans at all levels could be key next steps for the alliance in line with the commitments made in the new concept. Further, effective advisory and accountability mechanisms could be established and funded by the alliance at the strategic, operational, and tactical levels in order to ensure progress is well-informed and that the alliance remains accountable to its commitments. Thus, while much progress has been made, more could be done to ensure the alliance does not merely pay these issues lip service, but can deliver on these commitments.