How the Russian Invasion of Ukraine May Impact the Arctic 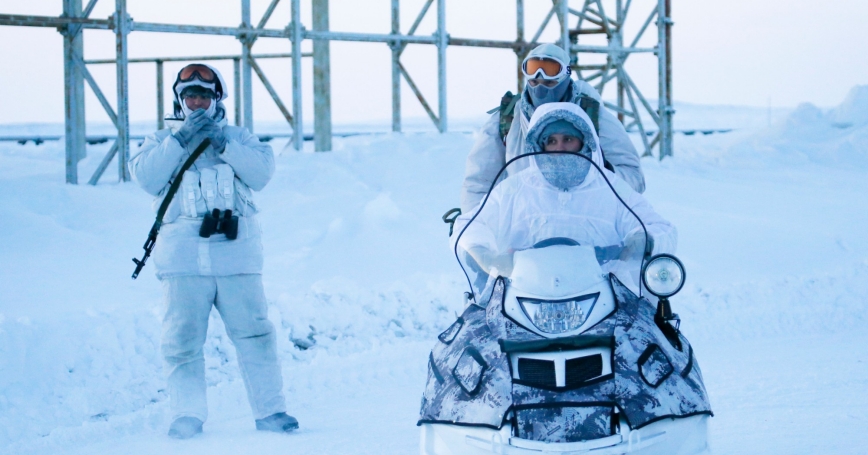 Russian service members stand guard at the Nagurskoye military base on the Arctic islands of Franz Josef Land, Russia, March 29, 2017

Seven countries that ring the North Pole recently declared that they would suspend cooperation with Russia at the Arctic Council, which Russia currently chairs, in response to Moscow's invasion of Ukraine. The council said it could not perpetuate an image of “business as usual.”

The move by Canada, Denmark, Finland, Iceland, Norway, Sweden, and the United States was unprecedented in council history, and it threatens to unravel a set of governance mechanisms put in place by the Arctic Council and other international forums that have maintained peace and collaboration in the Arctic for generations. Even Russia's illegal annexation of Crimea did not result in the same diplomatic response.

The seven Arctic states are cooperating in Arctic Council activities not involving Russia, including restarting scientific cooperation across countries. But the prospect of returning to the council's business as usual in the Arctic still seems very far away.

Although a conflict in the Arctic may be unlikely, it's hard to gauge whether it would happen, based on Russian President Vladimir Putin's unpredictable behavior and his invasion of Ukraine. The risk for miscalculation may be great—should a conflict spill over from the Ukraine invasion into the Arctic, the U.S. military is at somewhat of a disadvantage.

Should a conflict spill over from the Ukraine invasion into the Arctic, the U.S. military is at somewhat of a disadvantage.

According to Mathieu Boulègue, a researcher at Chatham House, a London-based policy institute, “Moscow feels that it has a position of relative strength in the Arctic, which means that it is clearly seeking to obtain dividends from its perceived military superiority.” The United States and its Arctic partners might consider resuming diplomatic relations with Russia through the Arctic Council as soon as feasibly possible after the end of the war in Ukraine.

Russia is by far the largest Arctic state based on size, population, and military forces stationed in the region. It routinely conducts Arctic tactical exercises with thousands of troops, including specialized Arctic units. Russia also has reconnaissance stations, dual-use civilian-military facilities and bases equipped with missiles, and radar scattered across its vast northern Arctic border, including within 300 miles of Alaska. Russia's ongoing war in Ukraine, however, may have depleted some of its Arctic capabilities, or at least momentarily distracted it from the Arctic.

Suspension of cooperation with Russia leaves the Western Arctic powers without a major formal mechanism in which to discuss Arctic matters.

Suspending the Arctic Council's broader activities also potentially hurts the Arctic's 4 million inhabitants who have lived in peace since World War II—a remarkable peace that has survived the Cold War and its multiple proxy conflicts between the United States and the Soviet Union. And there is no forum to de-escalate military issues, since the Arctic Council does not deal with them.

If Arctic cooperation unravels, the lack of persistent U.S. presence and limited readiness for sustained joint tactical operations could present challenges for dealing with military conflict in the region. The most recent national defense strategy continues to view China as the top U.S. competitor, though it also acknowledges competition from Russia.

Although the United States has considerable assets in the Arctic region, many of them are more strategic than tactical in nature and are designed for homeland defense, and global surveillance and power projection—not necessarily for sustained operations in the Arctic.

Many parts of the U.S. military are still learning (or relearning) how to operate in the Arctic. Efforts are hampered by extreme weather, poor communications stemming from a lack of polar satellites and atmospheric interference, equipment that is not optimized for the freezing temperatures, and limited ability to seamlessly rely on Arctic partners due to their continued inability to operate in conjunction with one another.

The limited infrastructure that does exist is neither interconnected nor equipped to support full-fledged military operations. Few airstrips north of the Arctic Circle are capable of accepting military aircraft, and even fewer hangars are available to protect them from the extreme elements. Land, sea, and air assets all require fuel—a rare resource in the U.S. Arctic.

The Arctic remains a relative weak spot in U.S. tactical defense. The United States has performed Arctic exercises, but not at the frequency or scale to train enough military forces to support extended operations in the region. In the European Arctic, a relatively small number of land forces train with their Norwegian counterparts to better survive and fight in harsh Arctic conditions.

Diplomacy with Russia may become an option at some point. But no matter how likely a conflict spillover may be, the United States could support its strategic interests by assuming a leadership stance in the Arctic Council in Russia's absence.

To do so, the United States could increase Arctic-ready tactical assets in Alaska, invest more in Arctic infrastructure, advance the Coast Guard's program to enhance U.S. situational awareness in the Arctic and reach local communities, and improve ground communication via Arctic satellites.

By taking these actions, the United States could demonstrate it is seriously committed to maintaining its defense and security position in the Arctic.

Benjamin J. Sacks is a policy researcher and Kristin Van Abel is a senior technical analyst at the nonprofit, nonpartisan RAND Corporation.

This commentary originally appeared on Los Angeles Times on August 22, 2022. Commentary gives RAND researchers a platform to convey insights based on their professional expertise and often on their peer-reviewed research and analysis.