India-Pakistan Ties Are Warming—but Don't Get Excited Just Yet 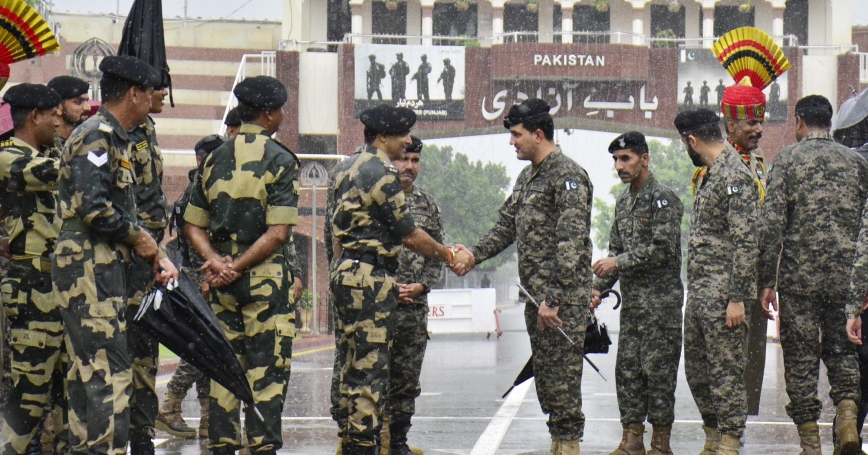 When the historic floods inundating large parts of Pakistan prompted worldwide offers of assistance, they included a rare public outreach from Pakistan's arch-nemesis, India. In an exchange of tweets in late August, Indian Prime Minister Narendra Modi wrote he hoped for “an early restoration of normalcy,” and Pakistani Prime Minister Shehbaz Sharif thanked Modi for his condolences, adding that Pakistan “shall, InshaAllah, overcome.” The two governments were also reportedly in discussions for New Delhi to begin sending humanitarian relief. But in the end, the usual logjams appear to have prevailed. Islamabad has so far refused to accept the aid due to continued bilateral disputes over the status of Jammu and Kashmir. Following the tweets, Sharif described India's policies in the disputed region as “genocide” and lamented that “Kashmiris have been denied their rights.”

The status of Jammu and Kashmir, awarded to India during Partition in 1947 and subsequently the object of multiple border wars and skirmishes between the two countries, has remained the one key stumbling block in improved India-Pakistan relations. In recent years, however, a quiet but determined warming trend has become apparent between New Delhi and Islamabad; the volley of well-wishing tweets after the disastrous floods is simply the thaw's latest evidence. That two nuclear-armed sworn enemies are getting along better is incredibly significant news—yet it has received little media attention in the West.

Remarkably, as late as February 2019, India and Pakistan were bracing for war. That month, a suicide terrorist attack in the Pulwama district on the Indian-administered side of Jammu and Kashmir left 40 Indian police officers dead. Pakistan condemned the attack, but the Pakistan-based terrorist group Jaish-e-Mohammed claimed responsibility. In retaliation, a few days later, India carried out airstrikes in Balakot, Pakistan, against a Jaish-e-Mohammed facility. During the operation, Pakistani forces shot down one of India's fighter jets and captured the pilot. In a gesture of goodwill, Islamabad released the pilot a few days later, and tensions eased.

Bilateral ties continue to show signs of durability and even progress.

Ever since this harrowing episode, bilateral ties have been on the mend—even when faced with daunting new challenges. For example, in August 2019, Modi unilaterally revoked the special autonomy status of Indian-controlled Jammu and Kashmir, which had been enshrined under Article 370 of the Indian Constitution, and converted it into a union territory directly administrated by New Delhi. Such a move would normally have prompted a Pakistani response, but silence reigned across the border, perhaps in a bid to avoid reescalation. Then, starting in May 2020, Indian and Chinese troops engaged in the most violent clashes since 1967 along their disputed land border in the Himalayas. As a declared “iron brother” of China, Pakistan could have tried to exploit India's distraction on its eastern flank to wreak havoc on its western flank, but again it chose restraint.

By late February 2021, the Indian and Pakistani militaries released a rare joint statement renewing a cease-fire along their line of control separating Indian-controlled Jammu and Kashmir from Pakistani-controlled Kashmir. By all accounts, this cease-fire has overwhelmingly held up, save for one minor violation earlier this month.

This recent border incident aside, bilateral ties continue to show signs of durability and even progress. For instance, in March, the Indian military launched a missile into Pakistan, by all appearances an accident. Fortunately, there were no casualties, and Islamabad did not respond in kind. Last month, New Delhi fired the three officers involved, showing that it plans to be accountable for its actions.

Meanwhile, on the very sensitive issue of counterterrorism, New Delhi for the first time will allow Pakistani counterterrorism forces to train alongside the Indian military in India next month. Granted, the exercise will take place under the banner of the Shanghai Cooperation Organisation and include the bloc's other members: China, Russia, Iran, and several Central Asian states. But this represents a significant step toward building mutual trust.

Relatedly, earlier this month, Islamabad accepted the remains of a Pakistani-based terrorist who died in Indian custody—the first time it has done so in at least two decades. The terrorist was a member of Lashkar-e-Taiba, a group that prioritizes attacks against Indian targets, and he was reportedly directed by Pakistani intelligence to attack an Indian post in Jammu and Kashmir. By accepting his remains, Islamabad tacitly acknowledged culpability for the attack through one of its terrorist proxies.

Bilateral ties are also increasingly bullish on trade. In the last quarter alone, for instance, Indian imports from Pakistan were $17.6 million, compared to $340,000 for the same quarter last year. India, in turn, exported $205 million worth in goods to Pakistan during the first quarter, up 72 percent from the same quarter last year. Although these numbers are small compared to most other bilateral trade volumes around the world, the point is that they are rising—and doing so in spite of strict mutual restrictions on trade access. For example, India taxes Pakistani goods at 200 percent. New Delhi also revoked Islamabad's “most favored nation” trading status following the Pulwama attack. In 2019, Pakistan banned Indian imports outright, but then allowed Indian pharmaceuticals and drugs to enter the country during the COVID-19 pandemic, which paved the way for additional access.

One key factor for quietly improving relations is that India has lately been brimming with confidence. Modi and his Hindu nationalist Bharatiya Janata Party (BJP) have done quite well for India. Modi, elected in 2014 and reelected by a landslide in 2019, will preside over a projected 7.5 percent growth rate in GDP this year despite mounting global uncertainties. Modi and his BJP government have also pursued an ultrarealist foreign policy, not only within India's neighborhood but globally as well, most recently by deftly navigating the fallout from Russia's invasion of Ukraine. India now has an unprecedentedly strong partnership with the United States, as well as countries throughout Europe, the Middle East, and the Indo-Pacific. China and Russia are simultaneously courting India. All this has put New Delhi at the crossroads of strategic competition and on the world stage for the first time, as I've written in Foreign Policy.

Such achievements have probably made engaging constructively with Pakistan less politically sensitive in New Delhi than in the past. In other words, Modi's and the BJP's detractors will be hard-pressed to credibly criticize them when things are going so well. And because the BJP is a Hindu nationalist party, the public overwhelmingly trusts the current government never to go soft on Pakistan—which gives Modi leeway his Indian National Congress party predecessors never had.

Another possibility is that New Delhi, through stepped-up engagement, may seek to persuade Islamabad to end or limit its support for terrorist proxies targeting India. This has become particularly crucial given Pakistan's longstanding support of the Taliban and the latter's reconquest of neighboring Afghanistan after last year's U.S. withdrawal. India worries that Afghanistan could once again become a safe haven and launching pad for future terrorist attacks against India. Productive working relations with Islamabad could complicate or disrupt terrorist activities and planning there.

On the Pakistani side, there are also good reasons to engage with India. For one thing, Pakistan has become highly dependent economically on China through Belt and Road Initiative investments, infrastructure projects, and trade. Many have argued that Pakistan is headed into a so-called debt trap with China. Thus, diversification to countries like India simply makes sense. Also, ever since the United States decided to suspend most security assistance to Pakistan under the Trump administration, the Pakistani military, which de facto runs the country, has been looking to get back into Washington's good graces as a counterbalance to Beijing. Given that India is an integral partner in the U.S. Indo-Pacific strategy, Pakistan probably figures that peace with its neighbor might convince Washington to reset ties.

It is important to consider the state of Pakistani politics, too. Until his ouster in April, Prime Minister Imran Khan, a recalcitrant populist, tried to fundamentally alter Pakistani policies. On foreign policy, he stressed the need for Islamabad to pursue an “independent foreign policy” by exploring new opportunities. Khan was the first Pakistani leader to visit Russia in over 20 years, deepening ties while taking an increasingly anti-American position. All the while, he was moderating his India policy; at times, he even praised New Delhi, notwithstanding sharp criticism on Jammu and Kashmir. Significantly, Khan's approach on India reflected the views of his chief ally and patron, Gen. Qamar Javed Bajwa, according to one of my Pakistani interlocutors.

However, after losing a no-confidence vote in parliament in April, Khan was forced to step down and make way for Sharif. One of the most pro-Indian politicians in Pakistan, Sharif began his tenure by stating, “We want peace with India.” Still, the extent to which he will actually pursue this policy remains unclear.

While the warming trend in India-Pakistan ties is encouraging, it makes sense to keep a healthy check on expectations. Events could easily derail progress. A terrorist attack connected to Pakistan and Indian retaliation, for example, could make both countries reconsider their approaches. This is precisely what happened soon after the image of Modi hugging then–Pakistani Prime Minister Nawaz Sharif went around the world in 2015 and instilled newfound hope the two nuclear-armed states might finally be getting along. Then the Pathankot and Uri terrorist attacks set bilateral ties back once again.

Additionally, any slight, real or perceived, could easily escalate to renewed tensions, especially if it suggests disrespect for either Hinduism or Islam. The United States, too, could inadvertently deepen divisions. For example, Washington's latest sale of an F-16 fighter aircraft upgrade package to Islamabad has irked New Delhi, which believes the United States is purposefully arming Pakistan to fight India.

Despite their thawing relationship, neither India nor Pakistan has fundamentally changed its threat perception of the other.

But the most important caveat is that despite their thawing relationship, neither India nor Pakistan has fundamentally changed its threat perception of the other. For instance, Islamabad's first-ever National Security Policy, released (PDF) in January, briefly mentions the importance of forging peace with India but focuses the vast majority of discussion on New Delhi's “hegemonic” goals and Indian oppression of Kashmiris. India has also been reluctant to seize the initiative and pursue peace, waiting instead for Pakistan to make the first move. Indeed, the last couple of weeks have featured dueling speeches by Indian and Pakistani leaders at both the SCO summit and United Nations General Assembly, suggesting the relationship will remain chilly for the foreseeable future.

There are, however, additional positive steps both sides could take to keep the increasingly friendly momentum going. One could be reappointing their respective high commissioners, the equivalent of ambassador among members of the British Commonwealth, which both countries still are. The last ones were sacked in August 2019 over Modi's decision on revoking constitutional autonomy for Jammu and Kashmir. Another might be to remove some of the many restrictions on bilateral trade and investment. Ultimately, it will take trust for India and Pakistan to normalize their relationship, especially around the issue of Jammu and Kashmir. Unfortunately, trust can only develop organically over time. There is simply no way to speed up that process—or even know what might derail it.

This commentary originally appeared on Foreign Policy on September 27, 2022. Commentary gives RAND researchers a platform to convey insights based on their professional expertise and often on their peer-reviewed research and analysis.