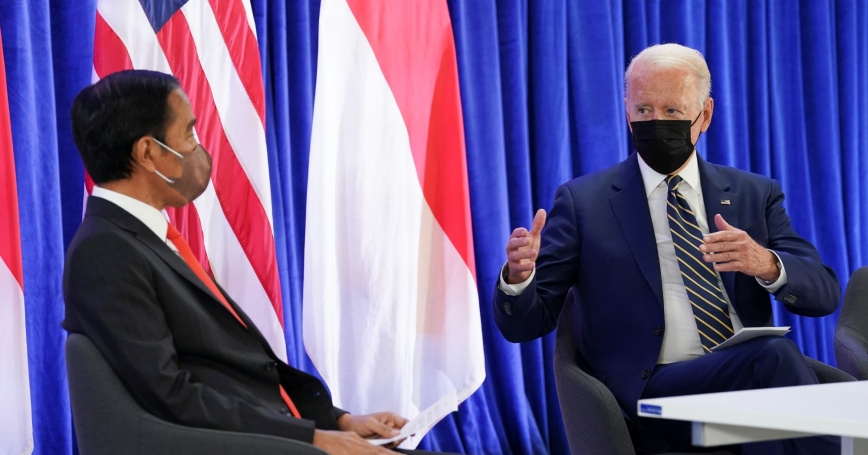 Ever since it hosted the Bandung Conference in West Java in 1955, Indonesia has been famous, or perhaps infamous, for its strict adherence to nonalignment in its foreign policy.

The Bandung Spirit is still alive and well today in Jakarta. Come November, Indonesia will play host to global leaders again, this time for the Group of 20 Summit, and Jakarta has announced that both U.S. President Joe Biden and Russian President Vladimir Putin are invited, regardless of how awkward this might be given the war in Ukraine.

Indonesia's nonalignment, however, breaks down within its own neighborhood, the Indo-Pacific. Rather than remain aloof from the new great power competition between the United States and China, Indonesia has quietly, albeit determinedly, favored relations with Washington, though in reality, it does not have much of a choice.

Indonesia has quietly, albeit determinedly, favored relations with Washington, though in reality, it does not have much of a choice.

In recent years, China has leveraged its coast guard and fishing militia to encroach upon Jakarta's exclusive economic zone. In one particularly tense episode, dozens of Chinese fishing vessels, along with a coast guard escort, entered the waters off Indonesia's Natuna Islands in December 2019. The confrontation escalated as Indonesia dispatched warships and F-16 fighter jets to patrol the area.

In August 2021, Beijing sent a survey vessel into Indonesia's EEZ for seven weeks. China's salami-slicing tactics continue to this day, according to Indonesian maritime security officials, but recent incidents have been less publicized.

Bilateral diplomatic and security dialogues between the two nations are essentially dead, due to the dispute over the Natuna Islands area.

Amid the pandemic, China provided Indonesia with much-needed vaccines and became its main supplier of personal protective equipment. Widodo prominently received a shot of Chinese vaccine on live television, with a box displaying the Sinovac brand name clearly visible in an important public demonstration of trust.

Despite this, Indonesia's relationship with China is all business now. The transactional nature of the ties was quite apparent during Widodo's visit to Beijing in July when he met with Chinese President Xi Jinping. The joint readout from their summit was light on shared vision and strategy and heavy on economic and people-to-people projects.

By contrast, Indonesia's relationship with the United States is more multifaceted, with the two agreeing on the need to work together against Beijing.

Last month, for example, Jakarta and Washington joined forces for the 16th annual Garuda Shield military exercises. Traditionally, the event has been a bilateral, army-to-army affair, but this year it was expanded to include 11 other like-minded, democratic nations and Singapore, and featured air and naval exercises as well.

Significantly, one of the naval exercises was held in the Riau Islands, a group which encompasses the Natunas, in an apparent deterrent signal to China. Beijing has held no comparable military drills with Indonesia.

Although Jakarta may not often verbalize it, Indonesia shares Washington's objective of a free and open Indo-Pacific intolerant of coercion.

Last November, Biden and Widodo discussed maritime security and “the importance of freedom of the seas” on the sidelines of a U.N. climate conference. Notably, Secretary of State Antony Blinken traveled to Jakarta a month later to give a high-profile speech on the Biden administration's Indo-Pacific strategy.

Indonesian Foreign Minister Retno Marsudi responded by noting that “the U.S. commitment was very noticeable,” a strong signal that trust is growing.

As a nonaligned nation, nobody should realistically expect Indonesia to publicly endorse relations with the United States over China.

In informal meetings last month with nongovernment groups in Indonesia, my interlocutors were overwhelmingly positive about relations with the United States and suspicious of Chinese intentions. One lamented, however, that the gaping hole in Washington's engagement with Jakarta is a lack of a true economic strategy, which in effect keeps China at the forefront of Indonesia's foreign policy.

As a nonaligned nation, nobody should realistically expect Indonesia to publicly endorse relations with the United States over China. Beneath the surface, however, the United States and China clearly lack equivalence in Jakarta's eyes.

From a geostrategic perspective, Indonesia values the United States because it helps deter China. If Washington can figure out its economic approach toward the region, then the United States may be able to offer a viable alternative outlet for engagement.

Indonesia's ties with China are purely transactional, and therefore stagnant. But Chinese influence over Indonesia should not be minimized. It remains strong and, unless or until Beijing's economic leverage is reduced, Washington will likely have to compete vigorously for Jakarta's affections.

Derek Grossman is a senior defense analyst at the RAND Corporation and an adjunct professor in the practice of political science and international relations at the University of Southern California. He formerly served as an intelligence advisor at the Pentagon.

This commentary originally appeared on Nikkei Asia on September 14, 2022. Commentary gives RAND researchers a platform to convey insights based on their professional expertise and often on their peer-reviewed research and analysis.