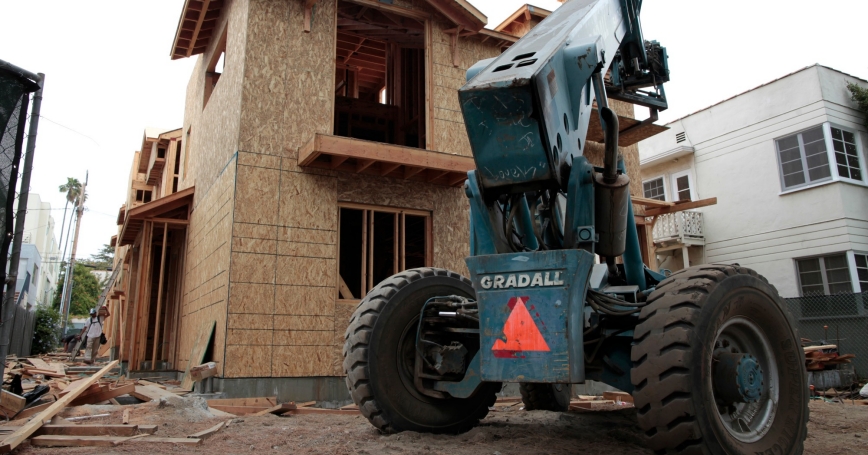 An apartment building under construction in Santa Monica, California, June 14, 2011

California has a shortfall in housing that has been estimated to be as large as 3.5 million units. It's in coastal communities like Santa Monica that this lack of housing production is most acute. From 2014 to 2018, for example, Santa Monica issued permits to build just 12 multifamily units (PDF), according the Southern California Association of Governments. Over that same period, the median sale price for existing homes in Santa Monica increased from under $900,000, to over $1.4 million.

The state is forcing local jurisdictions to address this crisis. In 2020, California's Regional Housing Needs Assessment determined that Santa Monica should add around 9,000 units of housing, with around 2,000 of those affordable for low-income households. Then in February, the state rejected Santa Monica's housing element, which is the document spelling out how this goal would be met. When the city fell out of compliance with state housing law, this triggered what is known as the “builder's remedy” and created a revealing natural experiment.

Under the builder's remedy, a developer can propose any housing project, regardless of existing zoning and land use codes, and it is automatically considered “approved,” as long as it doesn't present a clear danger to public health or safety. Notably, this approval is grandfathered in even after the city comes back into compliance. The builder's remedy has long been on the books but had no strong legal backing until the 2019 passage of SB 330, which transformed it into a nuclear option for developers to deploy in municipalities with persistent barriers to housing production.

Developers proposed 16 projects in Santa Monica using this builder's remedy, totaling over 4,500 new units of housing, with more than 800 of these designated as affordable for low-income households. If all these projects proceed, the city could soon witness the construction of more than twice as many housing units as were produced over the past two decades.

Under the builder's remedy, a developer can propose any housing project, regardless of existing zoning and land use codes, and it is automatically considered “approved,” as long as it doesn't present a clear danger to public health or safety.

Which brings us to the natural experiment. Prior to the builder's remedy taking effect, one developer already had eight projects pending with the city, some of which had been stuck in the pipeline for years because of objections to things like the number of materials proposed to be used in a building façade and the orientation of a roof deck. As proposed, those projects had just over 600 market rate housing units, and just over 100 affordable units. When the city fell out of compliance, however, the developer resubmitted proposals for all eight sites. These new proposals now include nearly 3,600 market rate housing units—a 485 percent increase—and more than 700 affordable units—a 540 percent increase.

These increases reflect what an experienced local builder believes the local market will support. The difference between what the city's elected leaders and regulators previously allowed and what the developer proposed, is revealing.

As a thought experiment, consider two constituencies who care about what gets built in a city: those who already own homes there—landlords included—and those who would like to live there. The homeowners wield vastly disproportionate power over local leaders, who are beholden in no small part to their votes. It's also not very costly for homeowners to flex their muscle, so they don't have to reserve their influence only for projects that truly might create hazards to public health or safety. They can and do try to prevent mere inconveniences: a modest increase in traffic, or difficulty parking, or even just general uncertainty.

By contrast, prospective future residents—as well as cost-burdened renters—may strongly support adding more housing but they wield much less political power. Imperfect as this may be, housing developers are the closest thing to a representative that this group has in local government affairs.

Developers' constituents are the individuals who will buy or rent the housing they produce. They typically must commit to spending many millions of dollars, while wading through years of unpredictable decisions regarding what, if anything, they will be allowed to build. In the high-stakes world of Southern California real estate, developers who misread their constituency are likely to be bankrupt very quickly.

Last month, Santa Monica submitted a housing element that was certified as compliant, thus closing the window for developers to use the builder's remedy. But what happened in this short time suggests that effectively addressing California's housing crisis may require little more than local governments taking their feet off the brakes of housing production. If the new developments proposed under the builder's remedy move forward, within just a year Santa Monica will be about 40 percent of the way to meeting its state housing allocation.

More than 124 other municipalities across Southern California are, like Santa Monica, struggling to meet their state housing allocations. They might want to take a close look at how the builder's remedy experiment in Santa Monica turned out and consider if that's how they want future residents to get a voice in housing policy.

Jason Ward is an associate economist at the nonprofit, nonpartisan RAND Corporation, where he is also the associate director of the RAND Center on Housing and Homelessness in Los Angeles, and a professor at the Pardee RAND Graduate School.

This commentary originally appeared on Santa Monica Daily Press on November 7, 2022. Commentary gives RAND researchers a platform to convey insights based on their professional expertise and often on their peer-reviewed research and analysis.