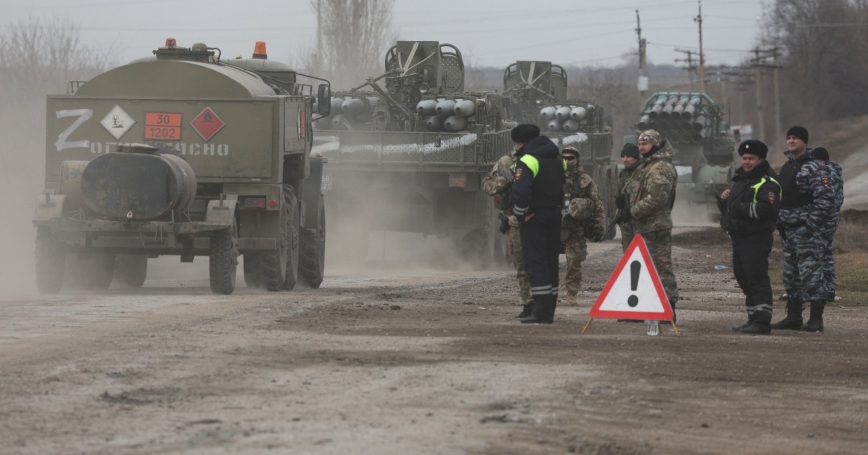 Former Russian President Dmitry Medvedev has said an attack on Crimea would bring “Judgment Day.” Notwithstanding, Ukrainian forces are gaining ground in the nearby Kherson region. Kyiv could have to decide soon whether to launch a full-scale assault against Russian forces in Crimea. This decision may be difficult for Ukraine and for its Western partners.

Since 1783, when the Turks ceded control of the peninsula, the Russian Black Sea Fleet has been based at Sevastopol. Sieges in the 1850s Crimean War and World War II were epochal. When the USSR collapsed in 1991, Crimea was the only Ukrainian region with a majority of ethnic Russians. Yet in a vote that year, a majority of residents backed Ukraine's leaving the USSR.

Despite this desire to decouple, Russians seem obsessed over Crimea. Russian President Vladimir Putin calls it an “inseparable part of Russia.” A 2018 poll by the independent Levada Center found that 86 percent of Russians backed its forcible annexation in 2014.

Battlefield gains in the south and east of Ukraine may have built confidence in Kyiv that its forces could retake Crimea. Ukrainian President Volodymyr Zelensky has taunted that the “occupiers have started fleeing” across the Kerch Strait Bridge to southern Russia.

Battlefield gains in the south and east of Ukraine may have built confidence in Kyiv that its forces could retake Crimea.

Ukrainian forces have begun attacking Crimean targets. In April, their anti-ship missiles sank the flagship of Russia's Black Sea Fleet, the Moskva. In August, Ukrainians destroyed several military targets across the peninsula. On October 8, a blast knocked out part of the Kerch Strait Bridge, impairing resupply of Russian forces. On October 30, a swarm of air and sea drones may have disabled three Russian warships at Sevastopol.

Despite these bold but glancing blows, a full-scale ground assault could be riskier. Crimea is connected to the mainland by a strip of land only five miles wide, likely well defended. Even a damaged or demoralized Russian army might mount an engineering effort capable of blocking a land campaign.

With 466 miles of shoreline, Ukraine could attempt an amphibious attack as an adjunct to a land attack. But Ukraine lacks helicopter and other amphibious assault capabilities. Conducting such operations against defended coastlines could be fraught with risks of catastrophic failure.

If Ukrainian forces were to regain control of the coastline along the Azov Sea, they could bombard the Kerch Strait Bridge with shorter-range precision rocket artillery. This may deprive Russian forces in Crimea of critical rail support. If Ukraine were to acquire longer-range rocket artillery, it might render unusable key Russian air and naval facilities in the peninsula.

On October 27, Putin said Russia had “no need” to use nuclear weapons in Ukraine. But if Kyiv were to mount an assault on Crimea, Kremlin nuclear threats could reemerge. In the West, Elon Musk might not be alone in fearing that Russia might use nuclear weapons if faced with “losing Crimea.”

These considerations suggest that Ukraine and its Western partners might benefit from a careful analysis of choices.

Could it be worthwhile to try to retake Crimea militarily? Success would restore Ukraine's territorial integrity and control over the Sevastopol naval facility, but costs may be high and nuclear risks might exist. On the other hand, if Russian forces in Crimea were weakened, an invasion could give Ukraine leverage to pursue a full or partial Russia withdrawal. Ukraine might consider a lease for controlled Russia naval access to Sevastopol, as before 2014.

Should Ukraine consider input from the West? Putin's boasts about Russia's nuclear forces have caused concern. On October 7, President Biden warned that for the first time since the 1962 Cuban Missile Crisis, there was a “direct threat” of the use of a nuclear weapon. In mid-October, senior Russian military leaders reportedly discussed possible use of nuclear weapons in Ukraine.

The status of Crimea might not be finally resolved even if Ukraine controls the rest of its territory.

Western leaders have said, as French President Emmanuel Macron put it, Ukraine should decide the “moment and terms of peace.” But when nuclear risks are involved, Ukraine might seek advice from the West before any full-scale attack on Crimea, since such an action could require Western military and intelligence aid.

The status of Crimea might not be finally resolved even if Ukraine controls the rest of its territory. An attempt to retake the peninsula may not bring Judgment Day, but Ukraine could be prudent to manage expectations about potential Crimea outcomes.

William Courtney is an adjunct senior fellow at the nonprofit, nonpartisan RAND Corporation and was U.S. ambassador to Kazakhstan, Georgia, and U.S.-USSR negotiations to implement the Threshold Test Ban Treaty. Peter A. Wilson is an adjunct senior international and defense researcher at RAND and teaches a course on the history of military technological innovation at the Osher Lifelong Learning Institute.

This commentary originally appeared on The Hill on November 3, 2022. Commentary gives RAND researchers a platform to convey insights based on their professional expertise and often on their peer-reviewed research and analysis.