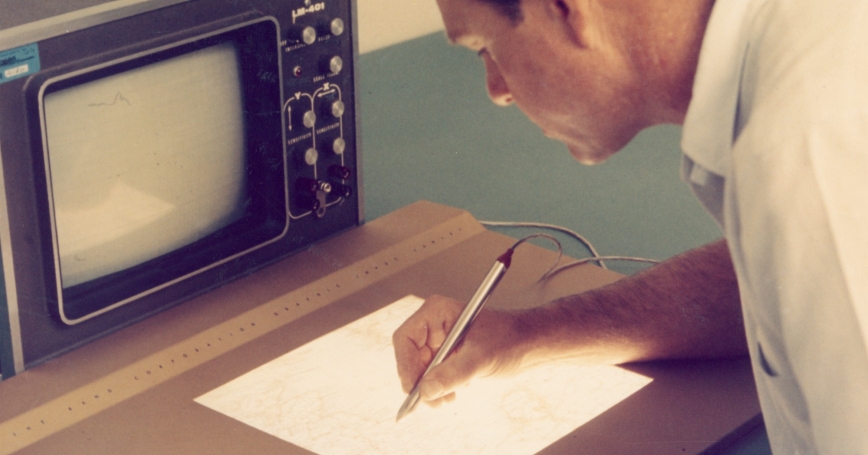 Before the Apple Newton and the Palm Pilot, there was the RAND Tablet.

Developed in the 1960s, the 10-inch-square tablet used a handwriting recognition program that RAND called GRAIL (for Graphical Input Language). Holding a stylus, users could draw shapes and text on the tablet, which GRAIL smoothed out and rendered correctly on a larger monitor in real time.

GRAIL was programmed to identify 53 hand-drawn numbers, letters, symbols, and geometric shapes. Even more innovative was the use of gestures to manipulate what's on-screen: Users could delete things by scribbling them out or writing over them, for example, or they could grab a shape and move it or change its size.

Alan Kay, whose work for Xerox PARC resulted in many Apple innovations, sometimes shows a film of GRAIL in action during appearances, pointing out features later used in Apple products.

“What a remarkable system that was,” Kay said in one presentation. “I felt like I was sticking my hands right through the display.”

Initially, RAND's economists and programmers used the technology to create flow charts and write code. The economists in particular needed the tablet because “none of us can type,” they reportedly told GRAIL's developers. But the technology found fans beyond RAND: The military used it to annotate maps, and a later version could translate Mandarin.

So why isn't there an r-Pad sitting on your coffee table? For one thing, the tablets cost $18,000 apiece—or nearly $140,000 today. Which makes the iPad Pro look like a bargain.