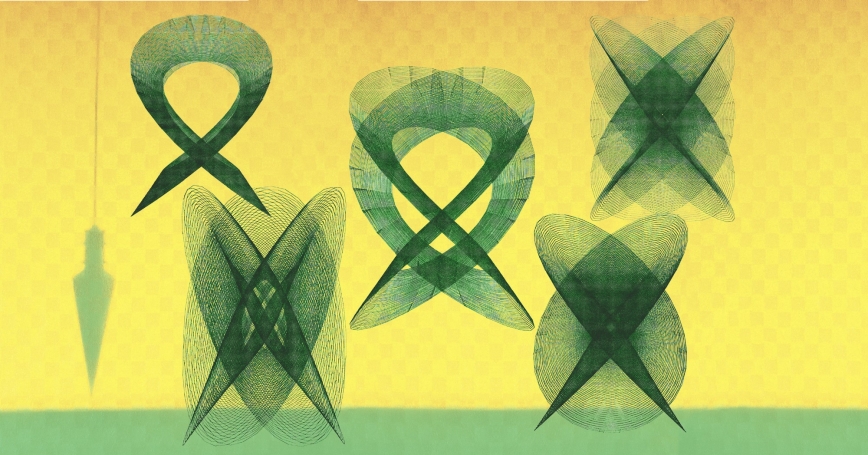 What does physics look like? To former RAND researcher Ivan Finkle, it looks a lot like art.

In 1964, Finkle wanted to experiment with a new piece of equipment that RAND had acquired—a Stromberg-Carlson 4020 plotter printer. He remembered reading about a scientist who decades earlier had used a compound pendulum with a light at the end to trace the pendulum's motion on photographic paper. Finkle decided he would try to digitally replicate the shape—called a Lissajous figure—with RAND's new printer.

“If you're a physicist, the motion of a pendulum is a very fundamental physics problem,” the retired Finkle recently explained, and a Lissajous figure is a useful way to help visualize it. However, Finkle, a computer scientist at RAND from 1957 to 1968, was primarily interested in this new and less labor-intensive way to create a data visualization.

The printer was programmed to draw a straight line between two points on a cathode-ray tube, or CRT display. To replicate the mechanically drawn figure, Finkle fed his equations into the computer (via magnetic tape, since early computers had less storage than your old flip phone!) to give the coordinates of each point. As each line was drawn, the printer photographed the result and compiled the lines. The result was strikingly similar to the original figure. “It demonstrated that our mathematical formula was accurate,” Finkle said.

But Finkle also recognized that data visualizations were aesthetically interesting as well. Soon, scientists and engineers—those with access to sophisticated equipment—were creating computer art just for fun. In a possible nod to this trend, the journal Science used one of Finkle's Lissajous figures as its cover art in 1965—proving that Science and art really do intersect.