Why Are Drug Prices So High in the United States? 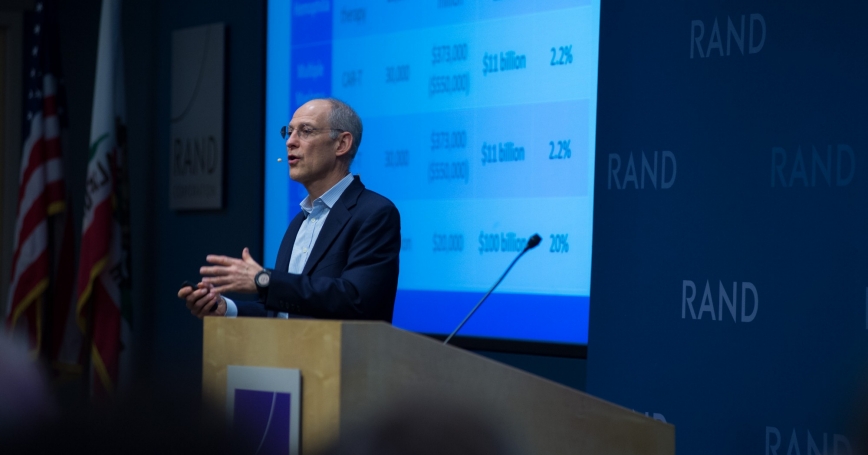 Recognized as one of the architects of the Affordable Care Act, Ezekiel J. Emanuel wrote the book on highly effective medical organizations, and has influenced approaches to health care costs, bioethics, end-of-life care, and more. He currently serves as the vice provost for global initiatives at the University of Pennsylvania and chair of the Department of Medical Ethics and Health Policy. In 2018, Emanuel delivered the Albert P. Williams Lecture on Health Policy at RAND, where he offered a framework for thinking about drug pricing.

On Crunching the Numbers

In 2016, we spent $10,300 per person in the United States on health care. That's a huge amount of money—and 30 percent larger than the next-highest country. How much does the U.S. spend on prescription drugs? Well, 17 percent of those dollars—which amounts to 3 percent of the total GDP—just goes to drugs. That's a huge amount of money just for drugs.

The whole world spends about $1 trillion on drugs, and roughly half of that is spent in the U.S. We're less than 5 percent of the world's population, and yet we pay 50 percent of drug costs.

Every other country in the world regulates drug prices, typically through some formal process of negotiation. Only the United States doesn't.

The key issue in all this spending on drugs is not the number of drugs in the U.S. We are not an outlier in terms of the number of drugs per person. I recently calculated that if you take the health care costs in the United States, which are $10,300 per person, and you look at the next series of very high-cost countries—Switzerland, Norway—that delta between our costs and their costs, a third of that difference is drug prices. That swamps any other costs: It's much more than the number of MRIs or CT scans, it's much more than doctors' salaries. So drug prices are a very substantial portion of the delta.

On Research and Development

If you ask the drug company executives why we have high drug prices, they'll say drug development is risky. Ninety percent of drugs that enter human clinical trials fail. That is true. But as Silicon Valley has taught us, it's very important to know when you'll fail. Failing early is very cheap. And that's true in the drug business, too.

We don't talk about the fair price of a car, or fair prices of restaurant meals, or fair prices for smartphones. But we do think there should be fair prices for drugs. That's because drugs prolong or improve our quality of life, or at least decrease our side effects. Like food and housing, many but not all drugs are basic goods necessary to lead a decent life.

Excessively high prices for basic necessities such as drugs are unjust because they represent a type of price gouging—exploitation.

On Solving the Problem

The federal government gives drug companies a monopoly through patents and FDA marketing exclusivity. And what do companies do with a monopoly? Both economic theory and lots of empirical data say that when you give a company a monopoly, they're going to raise prices until raising the prices reduces their margin.

What do we do in monopoly situations? We regulate. Every other country in the world regulates drug prices, typically through some formal process of negotiation. Only we don't.

Drug prices are excessive and unjust, and R&D costs don't explain the high drug prices in the U.S. We still have a lot of work to do to get those drug prices under control.

Founded in memory of Al Williams, a distinguished researcher and leader of health policy research at RAND, the Albert P. Williams Lecture on Health Policy was established through the generosity of Williams's friends and former colleagues to commemorate his legacy. Today, the Williams Lecture provides a forum for leading voices in health policy to share cutting-edge ideas and insights, giving ongoing life to Williams's commitment to improving health and health care for all of us.