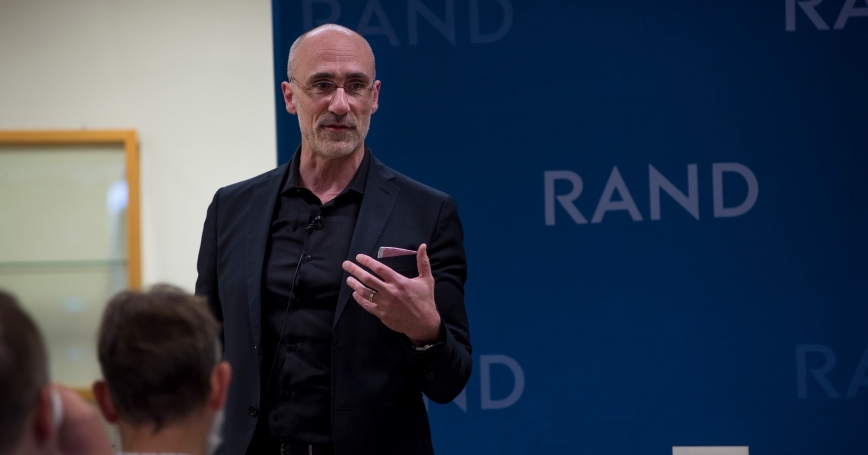 In May 2019, Arthur Brooks spoke at RAND to discuss his new book, Love Your Enemies: How Decent People Can Save America from the Culture of Contempt (Broadside Books, 2019). Here are excerpts from his talk, lightly edited for clarity.

From 2009 to 2019, Brooks served as president of the American Enterprise Institute (AEI). In the fall of 2019, he will join the faculty of the Harvard Kennedy School and Harvard Business School.

Brooks is featured in AEI's documentary film The Pursuit, the culmination of three years of research, conversations, and travel around the world, from the streets of New York City to the Dalai Lama's monastery in Dharamsala, to seek an answer to the question “How can we lift up the world, starting with those at the margins of society?” The film is available on iTunes and in August 2019 is coming to Netflix.

Brooks earned his Ph.D. in policy analysis from the Pardee RAND Graduate School, which presented him with its Alumni Leadership Award in 2016.

“Find more friends who are different than you, and embrace diversity, real diversity, which is diversity of thinking.”

If you're only around people who agree with you, you have got to get outside your bubble. People are curating their news feeds, and living in neighborhoods where everybody agrees, and going to churches and schools and sending their kids to colleges where everybody agrees with their politics—this is a really bad phenomenon that makes us weak, makes us unable to debate, makes it impossible for us to see beyond our ideological sphere. Proximity to people who think differently than you gives you much more appreciation—certainly tolerance and even love if you're working on it—for people who disagree with you. You will recognize that we can have a lot of similarity in the moral formulae that are animating us and at the same time have different policy prescriptions. This is a long way of saying, Find more friends who are different than you, and embrace diversity, real diversity, which is diversity of thinking.

We don't hate each other in America. We just act as if we did, take offense, and believe other people are hating us.

My dad used to say, “The mark of moral courage is not standing up to the people with whom you disagree; moral courage entails standing up to the people with whom you agree, on behalf of those with whom you disagree.” That's exactly what we don't do when we're in a base-locking exercise that says that the other side is stupid and evil, thus persuading nobody. It's incredibly impractical, by the way, because nobody in history has ever been persuaded with insults. Nobody in life has ever been convinced with hatred. 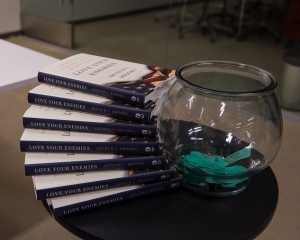 Civility is a garbage standard. If I told you my wife and I were civil to one another, you'd say we need counseling. You want to actually have a better country? We need to live up to a much higher standard. What is it? Love. What is love? It's not a feeling. To love, according to Saint Thomas Aquinas, is to will the good of the other.

Love people who are proximate to you because those are real human beings, with whom you can make eye contact.

If you're going to be treated with contempt, you can answer with love. And what are you going to get? A chance at being persuasive.

If you answer hatred with hatred, you will not persuade anybody, 100 percent guaranteed. I ask people all the time and they push back and say, “But some people deserve our contempt.” “They're so bad, they're hurting our country.” “They're so evil.” I reject that, because I think that certain ideas deserve our contempt but not people, and we have to separate ideas from people.

What's your goal? Is it to exile somebody? Do you wish we would have a regime where people just kick out people who disagree with you? No. You want to take away their vote and put them in jail? No. You want to sneak into their house and hurt them while they sleep. “Of course not, what kind of person do you think I am?”

So what do you want? I ask. They say, “I want them to think and act differently.”

So how's your hate working out for that? You want to have a chance at being persuasive? Only love will do.