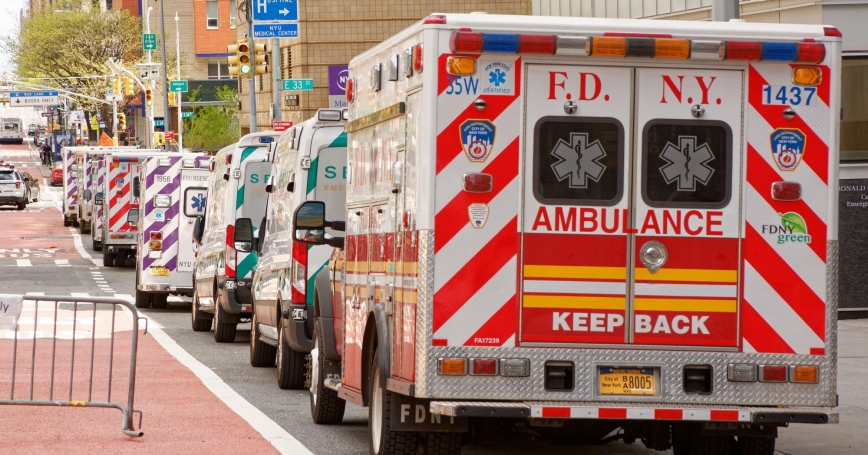 Ambulances line up outside a New York City hospital emergency room, May 4, 2020

Mahshid Abir knew what a surge of infections would look like: People fighting for breath in her emergency room, paramedics rushing to offload new patients, a scramble to find more beds, more nurses, more ventilators. She had spent her career preparing for it.

Abir is an emergency physician at one of the biggest hospitals in America, Michigan Medicine. She's also a senior physician policy researcher at RAND with a specific focus on improving emergency care, especially under crisis conditions. As COVID-19 exploded into a global pandemic, she raced to develop a tool to help hospitals prepare for the worst, and stretch their space, staff, and supplies when it comes.

“It's just a matter of where it hits next,” she said. “New York was the epicenter in the spring; who knows where it will be in the fall and winter? All hospitals need to have surge-capacity plans in place and be ready, because it could be their city.”

Abir grew up in Iran and lived through the relentless brutality of the Iran–Iraq War—the constant bombing attacks, the deaths of people she knew. She remembers hearing about a birthday party hit in one of the strikes, the children killed not much younger than she was. She had resolved to become a doctor by the time she left for the United States when she was 18, leaving her family in Iran. Having seen the results of war, she thought she'd specialize in reconstructive surgery.

All hospitals need to have surge-capacity plans in place, because their city could be the next epicenter.

Instead, she fell in love with emergency medicine. “No one's having a good day when they come into the ER,” she explained. “You only have one shot, one opportunity, to make a difference in their lives. I really cherish that opportunity to be there for people like that.”

She did her medical residency at Thomas Jefferson Hospital in Philadelphia—at the time, the big city with the highest murder rate in America. She was there one night when three victims of a gang shooting arrived, all of them beyond critical. Everything else seemed to stop as she fought to keep them alive, rushing from one to the next to get breathing tubes into them.

It had been a busy night already; the ER was operating at capacity, and the waiting room was full. What would happen, she remembers thinking, if the ambulances had just kept coming—if it wasn't three critical patients, but dozens, or more? In time, as she moved to Michigan Medicine, opened the Acute Care Research Unit there, and joined RAND, she developed a model to help hospitals answer that question. Its purpose was to identify bottlenecks that would slow their response by taking them through a worst-case scenario, a mass-casualty fire. 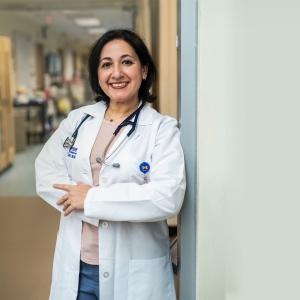 Dr. Mahshid Abir during a shift at Michigan Medicine

In Abir's emergency room, the crisis presented as an older woman coughing, crying, calling out for her husband, who had also shown symptoms of the virus and had died earlier that day of a heart attack. Or as the younger woman with chronic disease whose father, her caregiver, had died of the virus and who was now struggling to breathe herself. Or as the homeless man who had nowhere to go while he waited for test results that would show whether he, too, had it.

“These are the faces I won't forget,” Abir said. “It's just really hard. You want to be there for people, you want to support them, and there's just this sense of, What can we do to get our community through this horror?”

She and a team at RAND began working on a tool to help hospitals prepare for a surge of patients. Like her worst-case fire model, it would identify any shortages or bottlenecks in the three S's of surge capacity: staff, stuff, and space. They committed to finish it within 21 days.

Working with the American College of Emergency Physicians, they surveyed hundreds of front-line clinicians about the challenges they were facing: shortages of testing kits, protective masks, isolation rooms. Then they convened two conference-call roundtables with emergency doctors and preparedness experts to strategize how to create more critical care capacity in the nation's hospitals.

The tool went live on the 21st day. It looks like a spreadsheet; hospitals, health systems, even entire regions can input their own numbers—beds, doctors, ventilators, nurses—to see how many patients they can take. But the tool goes one step further. It allows them to model increasingly drastic changes they could make to accommodate more patients if they get hit with a surge.

RAND's tool allows hospitals to model drastic changes they could make to accommodate more patients if they get hit with a surge.

They could, for example, convert operating rooms into intensive-care suites, or call in anesthesiologists to help with critical care. Under the most extreme scenarios, they could assign more patients to every nurse and doctor, or use one ventilator for multiple patients. As the assumptions change, the tool identifies any bottlenecks that form downstream.

“If you have all the staff in the world, but you're limited in ventilators, then ventilators become the limiting factor,” said Christopher Nelson, a senior political scientist at RAND who helped develop the tool. “If you have a lot of ventilators, but you don't have the staff who are qualified to use them, then staff becomes the limiting factor. It takes two hands to clap. It doesn't matter how good the one is if you don't have the other.”

The tool and an accompanying report were downloaded from RAND's website more than 3,000 times in their first few weeks, as the coronavirus case count soared. The American Hospital Association highlighted the tool in a resource roundup for its members.

At Michigan Medicine, the springtime surge never came. If anything, the emergency room was strangely quiet, except for the thumping of helicopters bringing patients from hard-hit Detroit. Abir is now working with medical examiners in Michigan to investigate whether people died at home instead of risking a trip to the emergency room amid the pandemic. She's not optimistic about what the next many months will look like.

“Hospitals and health systems are going to need to think regionally,” she said. “There will be a shortage of ventilators. There will be a shortage of personal protective equipment. You can't make those things fast enough; you can't import them fast enough. But the truth is, at any given time, not everywhere across the country is going to need these resources. Not everywhere is going to be an epicenter. That's why we need to think regionally.”

She doesn't think a simple curve is going to define this pandemic, flattened or not. At some point, maybe when a vaccine has finally ended it, she thinks we'll look back and see waves of sickness crashing into the health care system. “We can stick our heads in the sand and pretend that it's gone,” she said. “But it's not.” It's not a question of if the virus will resurge, or when, she said; it's a question of where.

Funding for this project was provided by gifts from RAND supporters and income from operations.