Now You Can Play RAND Games at Home 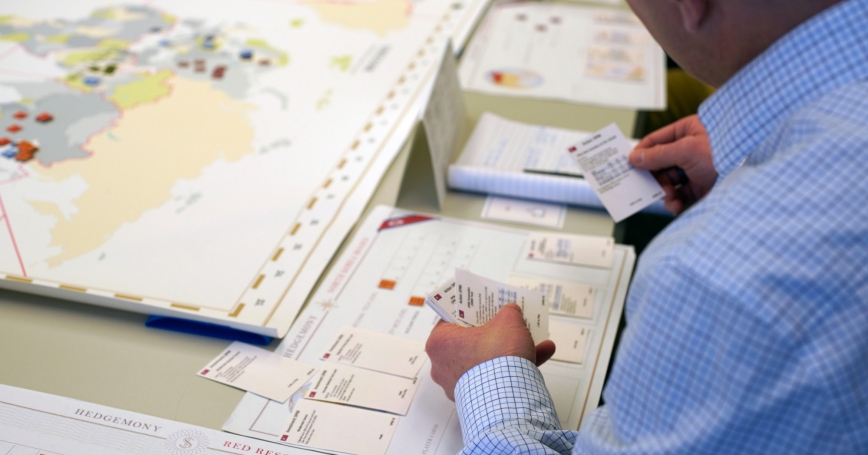 RAND is famous for its Pentagon wargames. Now the public can play defense analyst, too.

RAND's latest game is Hedgemony. Unlike Risk, which pits one army against another, Hedgemony players create a defense strategy to allocate troops and resources and “hedge” against the unknown. In other words, Hedgemony players make the defense policies that Risk's troops would carry out. The game's creators say it's aimed at policymakers, war colleges, and researchers—but they didn't rule out family game night. “It depends on the family!” said Michael Linick, a RAND researcher involved in the creation of the game.

A more layperson-friendly RAND-related game is ControVersus, created in 2019. It has sets of “concept” cards with topics like “antivaxxers” or “the 24-hour news cycle,” and “value” cards with phrases like “a dangerous precedent” or “everyone's favorite scapegoat.” Players flip over a value card from a stack, each person plays one of the concept cards they were dealt, and a (hopefully) friendly debate begins as players defend their cards. The goal is to talk politics with less heat—and without having to reveal your actual views to cranky Uncle Hank.

Still, RAND is no Hasbro, and most of its games aren't for public consumption. The 1954 game MonopoLOGs is about military procurement, but most people aren't in the market for an aircraft carrier. RAND's Game of Science was created in 1965, but good luck deciphering the rules. There's also the 1957 game of SWAP—Strategic War Planning—that takes about 10 days to finish.

And those are just a few of the games people play—at least at RAND.