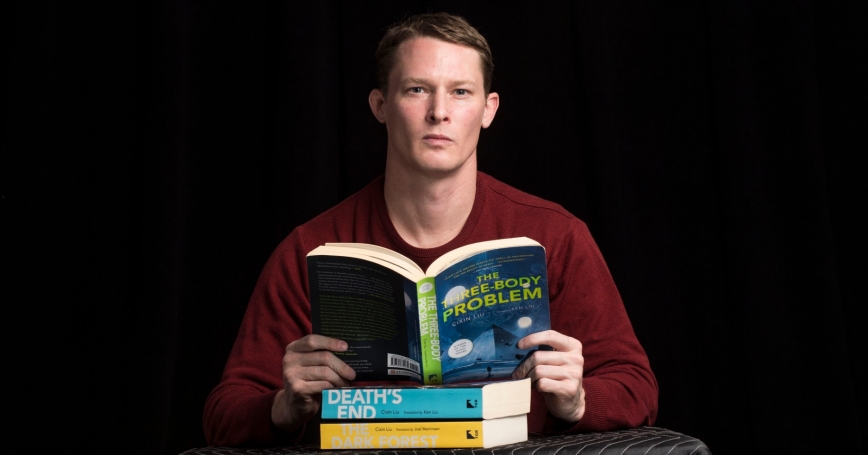 The author, a famed novelist named Cixin Liu, described Mathers as one of the foremost minds in the search for extraterrestrial intelligence. He had, Liu claimed, written a critically important report on the dangers of interstellar contact, The 100,000-Light-Year Iron Curtain.

I had never heard of him. I searched RAND's internal library for his report but found nothing. Yet a quick search of the internet turned up more than a few websites that quoted him as a real person. Who was this Bill Mathers—and was he really a RAND colleague?

I'm a policy analyst at RAND, where I mostly work on China-related defense and economic research. No small part of my interest in Chinese science fiction comes from trying to understand how contemporary Chinese authors tell a big story. And the book I was reading, Liu's The Three-Body Problem, is as big as they come.

It's part of a trilogy that provides Liu's answer to the famous Fermi paradox: With billions of stars in our galaxy, and countless worlds circling them, shouldn't we have found intelligent life by now? Liu describes a universe where life is abundant—and has learned to keep quiet out of fear of mutual destruction. The trilogy was translated into English in 2014; won the biggest prize in science fiction, the Hugo Award, in 2015; and has been recommended by no less than former U.S. president Barack Obama.

In the story, Bill Mathers' report provides a warning that the universe is not so quiet as it may seem. Our efforts to signal intelligent life are essentially equivalent to soldiers calling in artillery fire on their own position.

It certainly sounded expansive and Cold War–esque enough to be an old RAND publication. And I soon found references to Mathers on science fiction blogs and in magazines, and on news sites dedicated to space travel. OuterPlaces, a sci-fi webzine, even quoted him alongside renowned physicist Stephen Hawking. “Over the course of the book,” it said in a review of The Three-Body Problem, “Liu brings in real-world writings on the dangers of extraterrestrial contact, including [those of] Bill Mathers.”

My next stop was the Chinese message boards I often peruse to help me make sense of what China's political and economic leaders are doing. I found plenty of references to Bill Mathers, or 比尔马修 in Chinese characters—and a lively debate about whether he existed. “There's no such character,” one user posted. “Liu made him up.” Others countered that perhaps he was just hard to find because his reports were classified as top secret.

RAND researchers spent years studying the search for extraterrestrial life. A few had even explored how the geopolitics of the real Iron Curtain might influence interplanetary affairs.

Resolved to know the truth, I emailed RAND archivist Cara McCormick. She looked through more than 70 years of RAND publications, trying different variations of Bill or William Mathers, even Chinese transliterations that sounded close. She found one W. Christopher Mathews, who wrote about HIV care in the 1990s and early 2000s—but no Bill Mathers, and no report on an extraterrestrial iron curtain.

But Liu's fictional Bill Mathers was not far from reality. McCormick pointed me to several former RAND researchers who had spent years studying the search for extraterrestrial life. A few had even explored how the geopolitics of the real Iron Curtain might influence interplanetary affairs. They published reports with titles like A Comparison of U.S. and Soviet Efforts to Explore Mars or, more darkly, Planetary Contamination II: Soviet and U.S. Practices and Policies.

The Bill Mathers of Liu's book warns that Earth must be ready, willing, and able to fend off an alien attack, even if that assures its own destruction. That, too, has echoes of RAND's past. RAND research and analysis on “mutually assured destruction” helped maintain an uneasy balance between the United States and the Soviet Union throughout the Cold War. The ideas that Liu uses to build suspense could have been drawn from Herman Kahn, who wrote the book on nuclear deterrence, On Thermonuclear War. Or from John Nash, the game theorist featured in the movie A Beautiful Mind. Both were researchers at RAND.

I don't know whether Liu knew of them or their work. But I think he would be entertained to know that his fictional Bill Mathers came close enough to reality to send me on my quest.

The 20th century was full of science fiction authors whose futuristic imaginings have since become more fact than fiction. Isaac Asimov's stories of autonomous robots, for example, helped inform real-world discussions about the ethics of artificial intelligence. Asimov also teamed up with RAND researchers in the 1960s to study the possibilities of interplanetary exploration.

Liu is sometimes described as China's Isaac Asimov. What insights could we gain from a science fiction author like him, as talk of a U.S.–China race to Mars heats up?

Perhaps Liu might one day find himself on the cover of a RAND report. It would hardly be more surprising than a RAND researcher finding a fictional colleague between the pages of a Chinese science fiction story.

Sale Lilly is a senior policy analyst at the nonprofit, nonpartisan RAND Corporation.