Manipulating the Climate: What Are the Geopolitical Risks? 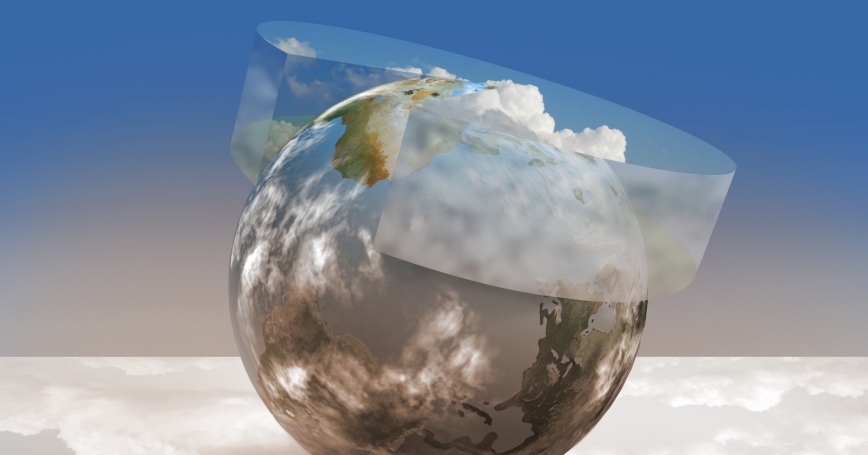 The snowstorm seemed to come out of nowhere. It coated the roofs of Beijing in a white glaze and brought traffic on a dozen highways to a standstill. The city, caught in the grip of a decade-long drought, had not seen so much precipitation in months. It was anything but normal.

In fact, the storm in February 2009 was the result of a remarkable confluence of cold air, cloudy skies, and 313 sticks of silver iodide fired into the atmosphere by weather engineers hoping to make something out of nothing. Their success in tinkering with the weather underscores a growing risk that has not received the serious international debate it deserves. What happens if someone in our ever-warming world decides to tinker with the climate?

Technologies that could block the sun's rays or siphon huge amounts of carbon from the air are not that far out of reach, a recent RAND analysis found. They could have world-altering consequences that would make a snowstorm in Beijing look mild by comparison. Yet the international community has not built any real consensus around such basic questions as when such technologies would ever be used, how, or by whom.

“Some of these technologies have been almost taboo to talk about,” said Emmi Yonekura, a physical scientist at RAND who helped lead the study. “But if we don't get our act together with climate mitigation, there might be real pressure to turn to them in the future. We want to make sure that we can do it safely and with some understanding in the international community.”

In 1965, Lyndon B. Johnson received the first presidential briefing on climate change. At the time, geoengineering—the intentional manipulation of the climate—was presented as one of the only possible solutions. Proposals since then have ranged from the fanciful (dropping billions of white balls into the oceans to absorb sunlight) to the formidable (unfurling a giant sheet of reflective mesh between the Earth and the sun). Those ideas may sound “outlandish and upsetting,” one scientific journal acknowledged—but they could give us an emergency brake to pull if we can't stop global warming.

Yonekura teamed up with fellow RAND researcher Michelle Grisé, an expert in international law, to look at where geoengineering is now, where it's going, and what the international community should do to prepare. They found that the technology is coming up fast. It's the policy that has fallen behind.

Their analysis focused on two major lines of ongoing research. 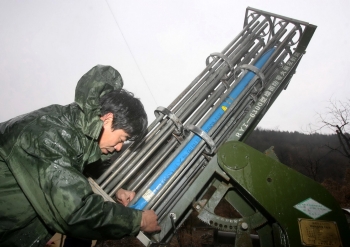 A Chinese meteorological department worker prepares to launch rockets for cloud seeding and rainmaking to ease the drought in Beijing, China, February 12, 2009

One would scrub the air of carbon pollution. That could involve massive filters and underground pumps—or it could mean seeding the oceans for phytoplankton and planting new forests to inhale carbon. It would be expensive. It would be slow. But it would take direct aim at the problem, slowing or even reversing the buildup of atmospheric carbon that is driving global warming.

The other option would seek to block some of the sun's energy—not with a giant space mesh, but with tiny particles suspended in the stratosphere or dusted onto clouds to make them reflect more light. It would be quick and relatively inexpensive—but carbon would continue to build up in the atmosphere. If we ever let those sun-stopping particles dissipate, the effect could be the climatic equivalent of opening a shaken-up bottle of carbonated water.

“You can see how this could lead to conflict, if you have two countries with different interests,” Grisé said. “And what we found is that there's really no road map for how to deal with problems that could arise as these technologies mature.”

It would only take one country—watching its crops shrivel or its water run dry—deciding to take a chance to set a global climate experiment in motion.

It would only take one country—watching its crops shrivel or its water run dry—deciding to take a chance to set a global climate experiment in motion. The effects could get out of hand quickly. In 1991, for example, the eruption of Mount Pinatubo blasted tons of gas and dust particles into the upper atmosphere. Those particles cooled global temperatures by around half a degree Celsius, proof that it could be done. But that then shifted the jet stream, giving northern Europe an unusually warm winter while the Middle East froze.

Even carbon-removal technologies, often seen as necessary to avoid the worst outcomes of climate change, have drawbacks that could pit one country against another. They could disrupt ecosystems, and some would require vast amounts of water and energy, researchers found. Even planting a new forest could deplete water supplies and increase agricultural runoff—burdens that would mostly fall on less-developed countries that have the space for new forests in the first place.

Yet the international community has not established the kinds of guardrails you might expect for potentially world-changing technologies. That's at least in part because it wants to keep the focus on the one sure pathway to a carbon-free future—which is cutting carbon emissions. Anything else, one expert said, would be like a temporary painkiller. It might make us feel better, but it wouldn't cure the problem.

No international agreement or enforcement mechanism directly addresses geoengineering. That's a blind spot that the international community should address now.

As a result, no single governing body is overseeing geoengineering efforts on a global scale. What there are, instead, are laws and treaties that cover different areas but could provide some guidance for regulating geoengineering efforts. The Law of the Sea, for example, could prevent efforts to alter the oceans, such as by dropping in a billion white balls. A 1976 treaty prohibits the use of weather modification—conjuring up a snowstorm, for example—as a weapon. But no international agreement or enforcement mechanism directly addresses geoengineering. 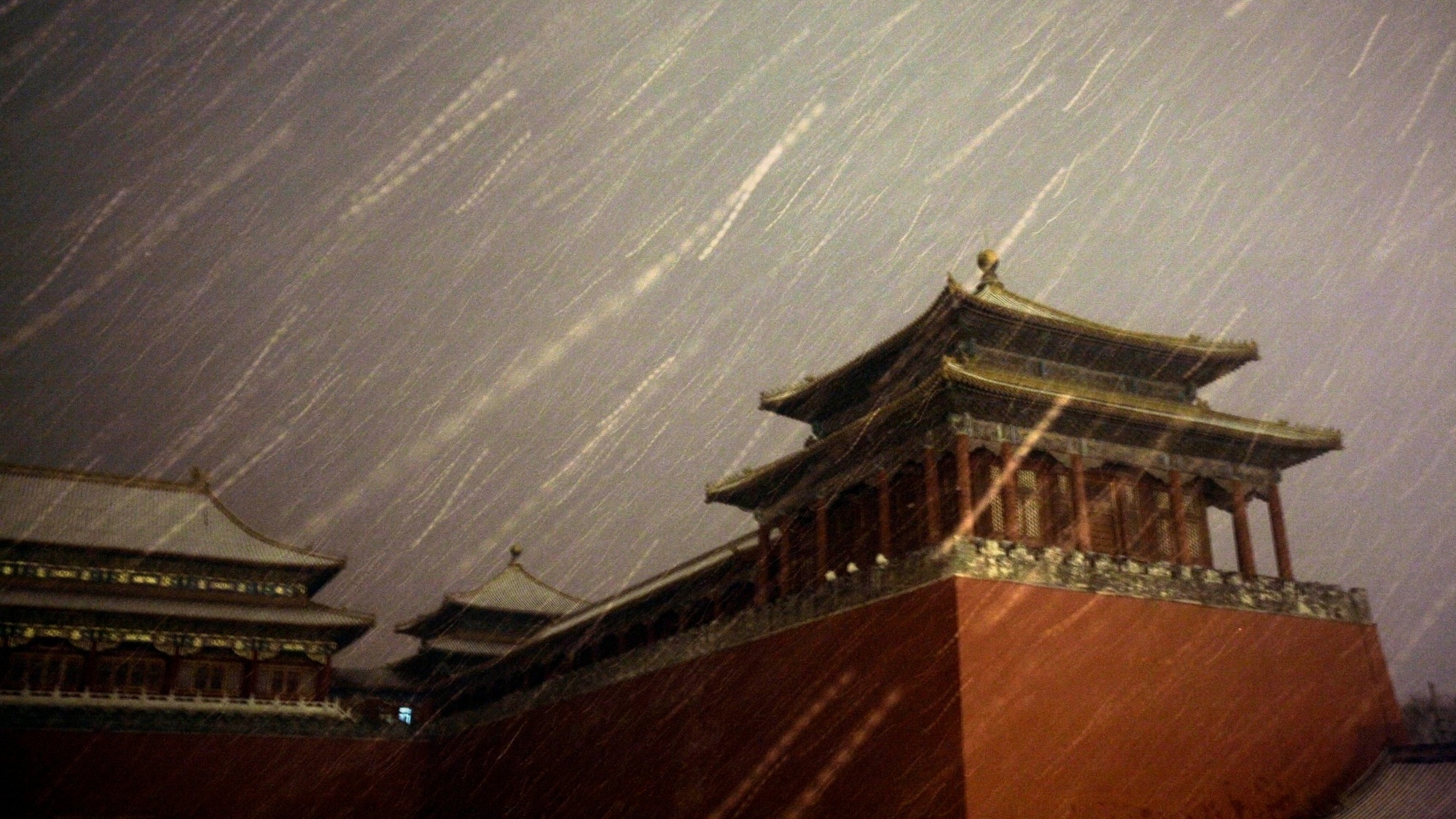 Snow falls over the Wumen Gate of the Forbidden City at night in Beijing, China, February 17, 2009

That's a blind spot that the international community should address now, while the potential risks are still theoretical, researchers wrote. World leaders should establish international agreements on geoengineering, with provisions to ensure that technologies are well-researched, well-regulated, and well-supported before any use. They also need to establish clear sanctions if any country doesn't follow the rules.

“We need to think through, how can we address this issue via international law and actually have it stick,” Grisé said. “How do we attribute harm? How do we build consensus when these technologies might have very different impacts on different communities? How do we integrate communities that might be disadvantaged, and make sure that their voices are heard?”

The U.S. National Intelligence Council warned last year that the lack of any international dialogue on geoengineering raises the risk that a country—or even a group—will try to go it alone in a way that risks conflict. The National Academies of Science have also pressed the United States to collaborate with other countries on geoengineering research. It would be “highly undesirable,” the British Royal Society added, for those technologies to come of age without international oversight.

The possibility that they might work means the pressure to use them will almost certainly keep rising with the global temperature. That puts an exclamation point on the need to get it right, starting right now. Every decade since Lyndon Johnson received that first presidential briefing on climate change has been warmer than the last.