What Sounds Do a Million Random Digits Make? 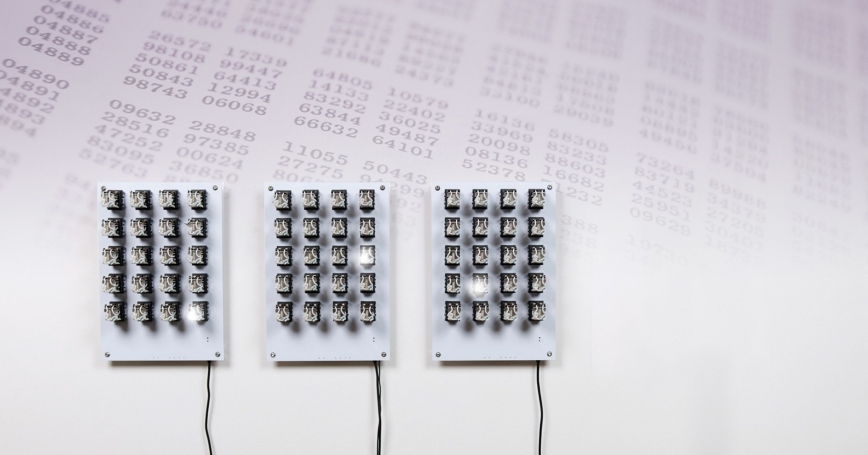 A sound sculpture called Click::RAND by Paul Dunham on a background of RAND's report, A Million Random Digits

The title of RAND's 1955 classic, A Million Random Digits with 100,000 Normal Deviates, doesn't exactly dance off the page. But a sound artist in New Zealand thought the work could make its own kind of music.

Paul Dunham created a sound sculpture to allow listeners to hear the sound of random. In keeping with the '50s vibe, he used a series of electric relays to represent numbers. Each creates a distinct click as it switches on and off. The result, as the relays work through a million random digits, is a clattering, chattering sonic machine. He calls it Click::RAND.

“I liked the idea of giving the book a voice,” said Dunham, a Ph.D. student in sonic arts at Victoria University of Wellington. “Click::RAND is more than just hearing a series of clicks. The work produces a series of pauses, breaks, and off-beats as patterns move between moments of synchronized and syncopated rhythms.”

A book of random digits might seem about as exciting as … well, a book of random digits. But having a million totally random numbers at hand is actually very useful. Internet encryption requires random numbers to protect everything from bank numbers to state secrets. Pollsters use random digits to ensure they're calling an unbiased sample of potential voters. One submarine captain was reputed to keep a copy of RAND's book with him on patrol, to help him chart courses no enemy could predict.

Click::RAND from Atticus Finch on Vimeo.

Dunham found his copy in a used bookstore in Germany. At the time, he was mulling how to coax sound from old computer punch cards. This is what he does; his art and research focus on revisiting old technologies to create new understandings of sound and rhythm. As he read in the book's introduction, the first copy of A Million Random Digits was neither hardbound nor soft but printed on 20,000 computer punch cards.

Dunham wired together a panel of electromagnetic relays, the nerve cells of early computers that open and close to control the flow of electric current. He then fed A Million Random Digits into a computer that converted every number into a binary code. Those codes tell the relays when to open and close to match the numbers in the book.

No two relays sound exactly the same; some are softer than others, some click open and closed with a metallic ring. Momentary patterns seem to emerge from their random clicking, and then vanish just as quickly. In that, Dunham said, the work is a fitting metaphor for the unexpected rhythms of everyday life.

He has since expanded Click::RAND to multiple panels, whose random rhythms coexist and clash with one another. It's clicked away at national and international exhibitions, and one panel is going on permanent display at Victoria University.

It's not a quick listen. Total time for Click::RAND to click through all one million random digits: Around 46 hours.