What Programs Can Help Parents in Prison and Their Children? 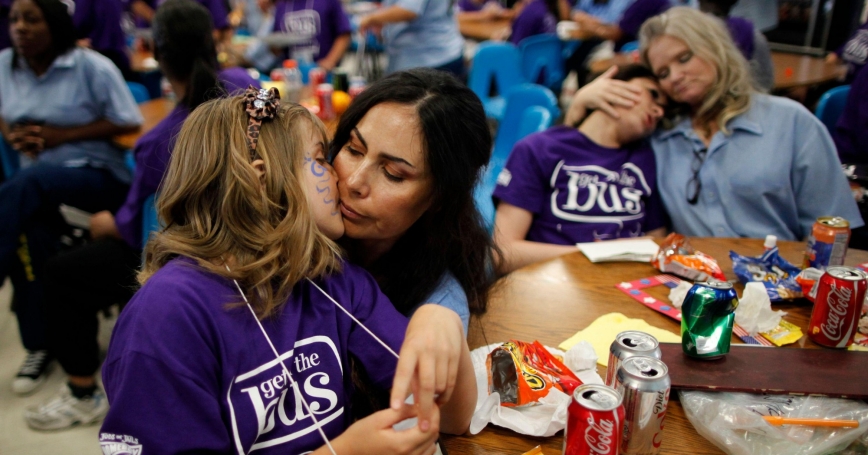 A daughter kisses her mother at California Institute for Women state prison in Chino, California, May 5, 2012

Tausha Monroe could feel the fear pounding in her chest as she waited in a drab prison dining hall for the little boy she called Doodle Bug. It had been seven months since she had seen her son face to face. Would he remember her? Would she remember how to be his mom?

Around 2.3 million people live behind the razor wire of American jails and prisons, and most of them, like Monroe, are parents. Research has shown that their children will suffer consequences for the rest of their lives: lower academic achievement, social and emotional struggles, and a much higher risk of going to prison themselves. Yet no nationwide study in recent years has looked at what prisons are doing to help parents be better parents when they get out.

Researchers at RAND developed a survey to start filling that gap, to see whether incarcerated parents and their children are getting the support they need. The initial results suggest parenting programs are common in American prisons—but they're also inconsistent, under-studied, and rarely tailored to the specific needs of incarcerated parents like Tausha Monroe, especially those who are Black or Latinx.

Having a parent in prison can be so traumatic that children who experience it continue to have higher rates of depression and anxiety—even in their mid-40s. One study described it as a “shared sentence” for both parent and child, one that may help explain how social inequities like poverty get passed from one generation to another. So many children have experienced that shared sentence—more than 5 million, according to recent estimates—that Sesame Street introduced a character whose father is in jail.

What prisons do, and can do, for the parents of those children is more than just a policy question—it's a social justice question. Around one-third of all Black men born in 2001 can expect to serve time behind bars at some point in their lives. For Latino men, it's closer to one in six; for White men, one in 17. Helping parents in prison maintain and build connections with their children, RAND researchers thought, might be one way to address the disproportionate toll that mass incarceration has had on communities of color.

“My objective in any project, but especially this one, is to improve the outcomes of marginalized, vulnerable populations,” said Dionne Barnes-Proby, a social policy researcher at RAND and director of RAND's Graduate Student Summer Associate Program, who helped lead the project. “That can best be done by, first, understanding what programming is available, and then assessing whether it improves the lives of people who need it. For me, that's the short- and long-term goal of this effort.”

The State of Parenting Programs

Tausha Monroe begged the judge not to separate her from her son, then 2 years old. She had struggled with heroin and meth. A relapse put her in violation of the terms of her probation from an earlier drug-related arrest. The judge gave her 22 months. She reported to a prison south of Portland, Oregon, on Christmas Eve in 2020.

“It was horrible,” she says now. “The worst torture I've ever experienced. I missed just holding my son, looking in his eyes, being in his presence. I just didn't get to have that connection anymore.”

RAND's research team surveyed prison administrators in five states to start piecing together information about what programs are available for parents like Monroe. Each of the states they chose—Indiana, Iowa, Kentucky, Montana, and Vermont—has a high percentage of children with parents in prison. Each also reflects the national disparity in Black and White incarceration rates.

Helping parents in prison maintain and build connections with their children might be one way to address the disproportionate toll that mass incarceration has on communities of color.

The researchers found that 80 percent of the prison facilities in those states offer at least one parenting program. Most focus on improving parent-child relationships or building parenting skills. Prison administrators considered almost all of them to be successful, most often because of the interest and enthusiasm of the parents involved.

But the survey also found opportunities to improve. Most of the programs used materials developed for parents outside prison—materials that might not meet the needs of those on the inside. Most also made limited effort to provide culturally responsive support, aside from books or occasional classes offered in a language other than English. That's a troubling oversight, the researchers wrote, given the disproportionate number of Black and Latino parents in prison.

“This was where we knew we wanted to make a contribution, shining a light on the caregivers, the parents,” said Celia Gomez, a policy researcher and codirector of the RAND Center for Qualitative and Mixed Methods, who helped develop and lead the survey. “There's been a lot of research and programming focused on supporting children who are affected by incarceration. But there's really been limited attention paid to the parents who are currently in those institutions.”

Opportunities to Improve Programs and Services

For months, Tausha Monroe could only talk to her son from the other side of a videoconference screen. Then she moved into a minimum-security side of the prison, with a Head Start program available. She signed up immediately. On Thursdays, she would attend parenting classes, learning how to handle tantrums or reinforce table manners with cool patience. On Tuesdays, with her coach watching, she would play trucks with her son over video or read him Pete the Cat.

“I felt like he was mad at me,” she says. “Like, 'Where have you been, Mom?' It was probably just my own feelings, my own worries, but I felt like he was angry at me for not being there. I had this fear that I wouldn't be able to be a good mom when I got out. I didn't know if I'd remember even how to be.” 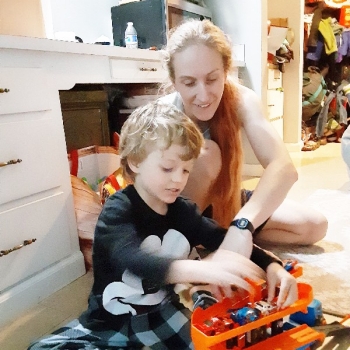 Tausha Monroe with her son

Few of the prisons in RAND's initial study provided the kind of parent-specific reentry support that could help parents like Monroe make that crucial transition back to being a full-time mom or dad. Fewer still provided any kind of follow-up support or continuing services after a parent had gone home.

Researchers are now working to refine and scale up their survey to bring in all 50 states. That will allow them to start to compare what different states do to support incarcerated parents and which approaches appear to be the most promising for parent and child.

“This is an area where institutions have an opportunity to grow, to become more responsive to various demographic groups,” Barnes-Proby said. “As a social worker by training who has worked with children whose family members were incarcerated, I have a personal interest in trying to make sure supports are provided for them.”

Tausha Monroe knows the date when she was finally able to see her son—really see him, not just on a video screen—as well as her own birthday: July 30, 2021. A prison guard warned her she could not hold him or touch him because of COVID-19 precautions. But she could sit with him.

The door opened. Her mother walked in, carrying her son in a car seat. Tausha caught her breath, waiting to see how her son would react. He looked up from his car seat—and then he reached for her.

She got out a few months later. She's in recovery, in treatment—“doing really good.” She credits the prison Head Start program with helping her become the mother her son deserves. “I didn't expect to get hugs or any kind of love when I got back,” she says. “Literally the third day, he was in my arms. He knew I was mom.”

She still likes to get down on his level and play trucks with him, or hold him close and read him Pete the Cat.