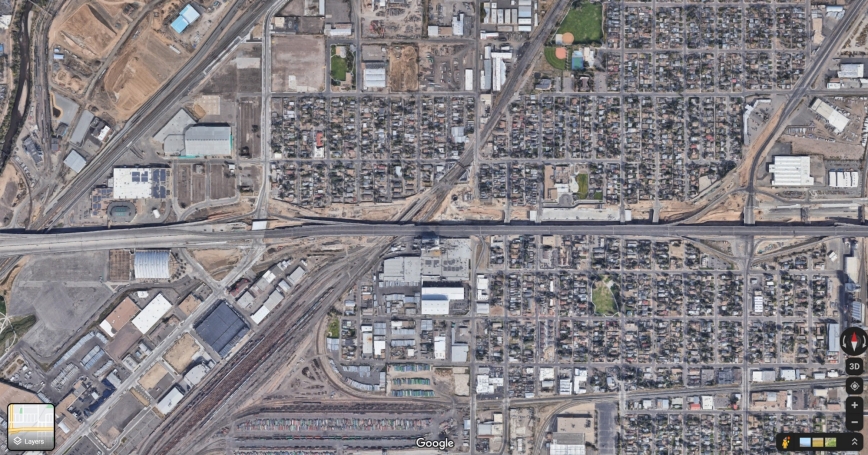 On the north side of Denver, people have a word for the stench that often drifts through their windows and under their doors: purijuana. It's a combination of the Purina pet food factory up the street, and the many marijuana operations that have made the neighborhood their own. Residents surveyed in 2012 also described smells of “sewer, animal rendering, vehicle exhaust, and death.”

It's no accident that this community has lived for decades with the smokestacks, freeway traffic, and clanging railyards that other parts of Denver can ignore. It and many others across America were redlined starting in the 1930s, marked on government maps as too “hazardous”—as in, too Black or too immigrant—for federal home loans. When zoning officials needed somewhere to put a new factory or freeway, those redlined neighborhoods were like a bullseye that they hit again and again and again.

Researchers from RAND have developed a free online tool that shows the results. It maps those historic red lines against more than a dozen environmental hazards, from air pollution to toxic waste sites to smothering summer heat. It shows, for more than 200 metro areas, where one racist policy continues to shape lives even decades after it was revoked.

“It's meant to start conversations,” said Carlos Calvo Hernandez, an assistant policy researcher at RAND and a student at Pardee RAND Graduate School, who did much of the data work. “Community advocates can just point to the map and say, 'Here is what we've been talking about for years or decades. This is what's been happening in our community.'”

Candi CdeBaca grew up in the north Denver neighborhood known as Swansea. It was once an industrial enclave for eastern European immigrants; today, the language on the streets is Spanish. Generations of families, drawn by jobs at the smelters or meatpacking plants, put down roots that reach deep. It's not uncommon to find grandparents, parents, and children all living together on the same block.

Their neighbors include a stockyard, a toxic Superfund site, and the concrete moat of Interstate 70—which, CdeBaca says, “tore a huge gash in the community.” The neighborhood had no grocery store until this year, and too few sidewalks—but dozens of warehouses repurposed for industrial marijuana grow operations.

We physically are on the wrong side of the tracks. It's like it's okay to pollute these neighborhoods because their populations are seen as expendable.

“We physically are on the wrong side of the tracks,” said CdeBaca, a fifth-generation resident of Swansea who was the first in her family to graduate from high school, then earned two college degrees before moving back to the same block where she grew up. “It's like it's okay to pollute these neighborhoods because their populations are seen as expendable. This is happening in cities throughout the United States.”

Researchers at RAND wanted to give communities like Swansea a tool to help them document the hazards they face and push for change. They started with redlined maps of 202 metro areas that the University of Richmond had digitized and put online. The maps cover cities as small as Portsmouth, Ohio (population 18,252) and Winthrop, Massachusetts (19,316) up to Chicago, Los Angeles, and the individual boroughs of New York City. Nearly one in five Americans can find where they live on those maps.

Then the researchers started pulling in data.

They marked areas with high concentrations of sooty air pollution, linked to asthma, cardiovascular disease, and early death. They showed where water in nearby streams could be dangerous to drink. They charted flood risks, hazardous waste sites, even maximum monthly temperatures and the density of tree coverage. Users can select a metric and then see how the redlined neighborhoods in their city have fared compared with those that weren't cut off from government home loans. 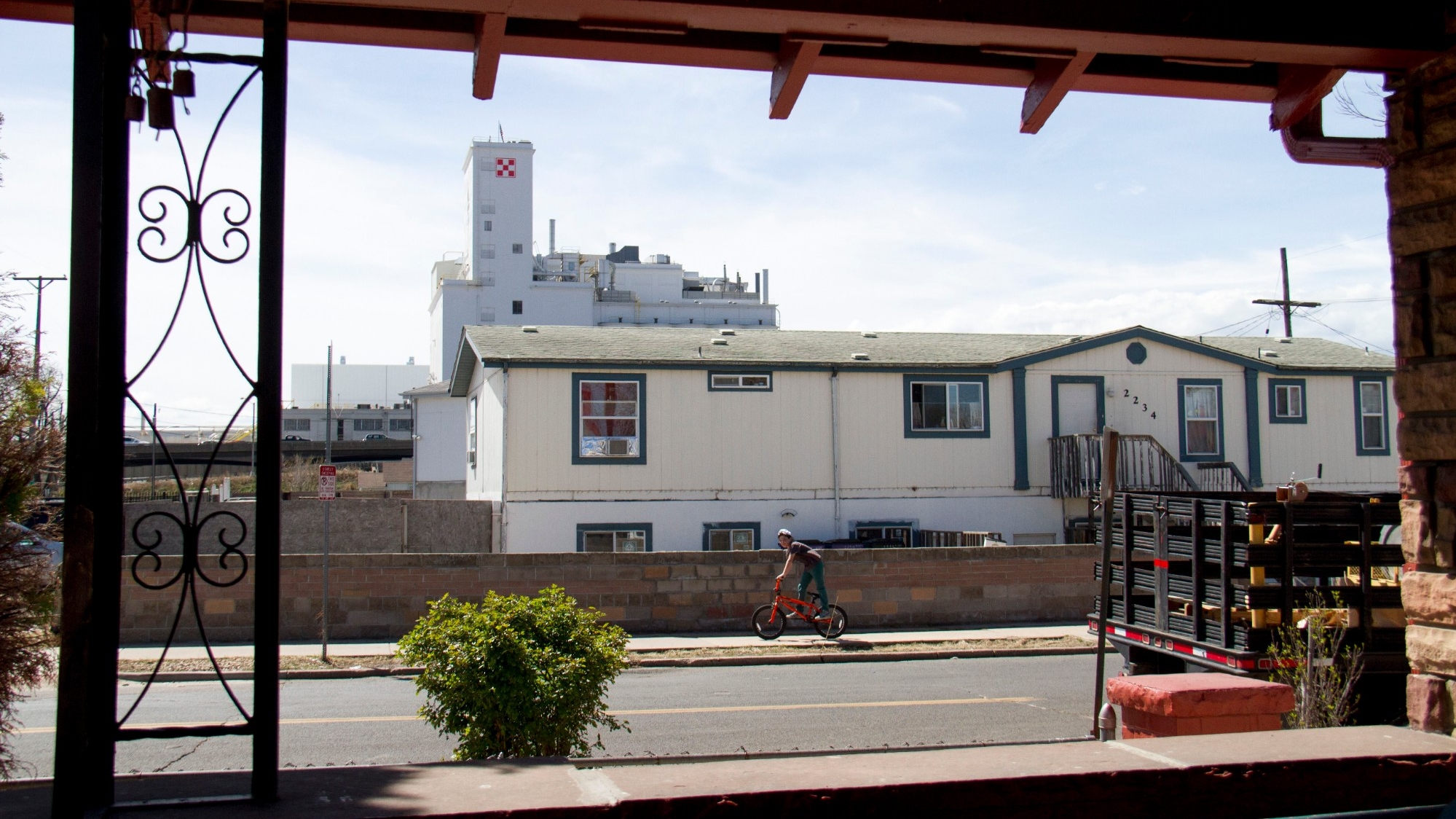 A house in the Elyria-Swansea neighborhood in Denver, Colorado, April 8, 2016

The overall pattern is clear and consistent: more pollution, more hazards, more risk in the redlined communities. On average, for example, communities that the government once labeled “hazardous” still have less than half of the tree canopy coverage even now than neighborhoods the government considered “best.” The pattern seems to be especially strong in some cities, especially those in the Northeast and Midwest, and weak or nonexistent in others.

“We wanted to provide a particularly rigorous way to think about structural racism and how to target efforts to address it,” said Jaime Madrigano, an adjunct policy researcher at RAND and an associate professor at the Johns Hopkins Bloomberg School of Public Health.

Armando Payan worries about the air that children breathe in their north Denver school near the freeway. He's challenged city politicians to bring their bicycles and see how long they last on neighborhood streets rumbling with heavy trucks. “We're a dumping ground for the city,” he said.

But there's another hazard the community has had to mobilize against, and it's not one that appears on RAND's maps: gentrification. “Most of the people looking to buy up here are affluent professionals,” said Payan, a real estate agent, “and they come with a lot of money.” The community wants more parks, less traffic, and cleaner air, of course—but it worries those are the very things that will make it more attractive to builders and buyers.

RAND researchers have heard that same concern about “green gentrification” from many other communities as they dig beneath the hazards on their maps. One city cleaned up a polluted creek, for example—and then installed kayak ramps, which the creek's existing neighbors pointed out were certainly not for them. The researchers are now working with community advocates in several cities to develop a set of best practices for untangling the environmental legacy of redlining without causing additional harm.

“It's a lot more complicated than just stamping out the environmental hazards that are causing these injustices,” said Sameer Siddiqi, an associate policy researcher at RAND. “Policymakers who want to remedy these injustices are going to have to struggle with how to protect the residents who are there.”

That's especially important right now. The Biden administration has made environmental justice one of its signature policy initiatives. It has pledged to ensure that 40 percent of federal investments in climate, clean energy, and environmental projects benefit disadvantaged communities. RAND's mapping tool can show not just where those disadvantaged communities are, but where communities that were specifically disadvantaged by government policy are. The work that community organizers, local leaders, and researchers are doing now will, they hope, mark out a more effective and equitable path forward.

In the communities of north Denver, picket signs now decorate some front yards, warning in Spanish: “My community is not for sale.” The area anticipates potentially billions of dollars in revitalization projects, including a concerted effort to plant more trees. But residents want those to come with protections for existing homeowners and renters, more investment in affordable housing, and hiring preferences for people already in the neighborhood.

“These mega-investments are not community-led, not community-supported, and they're exacerbating the push-out of communities that are already there,” said CdeBaca, who, among many other things, is leading a fight against the proposed redevelopment of a nearby golf course, one of the few areas of open space in the community. “Governments need to take responsibility for not only cleaning up dirty land, but also putting in place mechanisms to protect the people in those spaces.”

She doesn't need a megaphone to get that message out anymore. In 2019, she ran for a seat on Denver's city council, pledging to do more to help communities like hers—and won.