Civilian Casualties: Lessons from the Battle for Raqqa 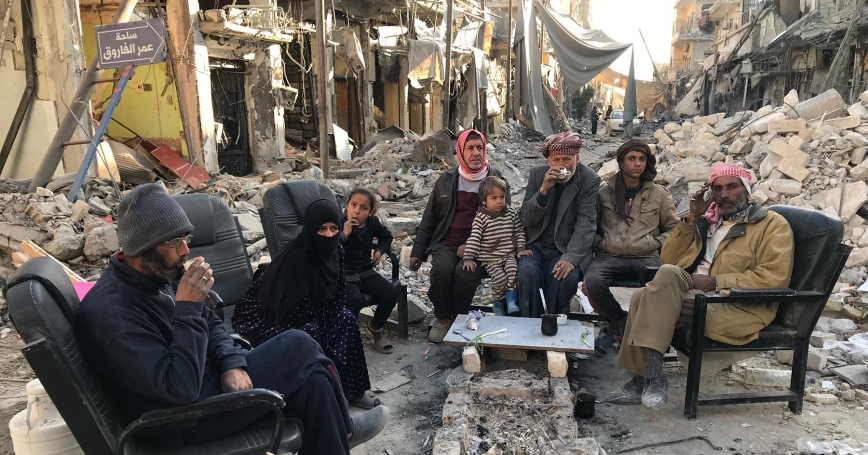 Reporters who reached the Syrian city of Raqqa in October 2017 found an apocalypse of dust, death, and rubble. NPR described it as a “wasteland of war-warped buildings and shattered concrete.” The New York Times called it a ghost city.

The United States had promised the most precise air war in history to destroy the Islamic State across its strongholds in Iraq and Syria. Yet by the end of the U.S.-led battle for Raqqa, the group's de facto capital, as many as 80 percent of the buildings were deemed uninhabitable. Several thousand civilians who had survived months of shelling and street fighting had nowhere to go for safe drinking water within the wreckage.

Researchers from RAND spent months analyzing the battle and asking what the United States could have done better to protect those civilians from the harms of war. They found that military leaders too often lacked a complete picture of conditions on the ground; too often waved off reports of civilian casualties; and too rarely learned any lessons from strikes gone wrong. Raqqa may have been a victory, but it was also a smoldering monument to how much more the military could do to protect civilians.

What Happened in Raqqa

“The Department of Defense has exactly zero permanent staff who wake up every morning with the sole priority of preparing the military to reduce civilian harm in combat,” said Michael McNerney, a senior international and defense researcher at RAND. “Protecting civilians is important to everyone in the department, but it's the top priority for no one.”

The story of what happened in Raqqa is not the same as the story playing out now in Bucha and Mariupol, where Russian forces have deliberately targeted civilians. The United States' emphasis on minimizing civilian harm was “quite clear and strong” up and down the chain of command, researchers found. But the way in which the U.S. military waged war in Raqqa too often undercut that commitment.

By the time U.S. forces and their allies encircled Raqqa in May 2017, their goal was no longer just to drive out the few thousand ISIS fighters holed up in the city. It was to annihilate them. American troops called the campaign Operation Eclipse. Their partners in the Syrian Democratic Forces (SDF), who would do the fighting on the ground, called it the Wrath of the Euphrates. 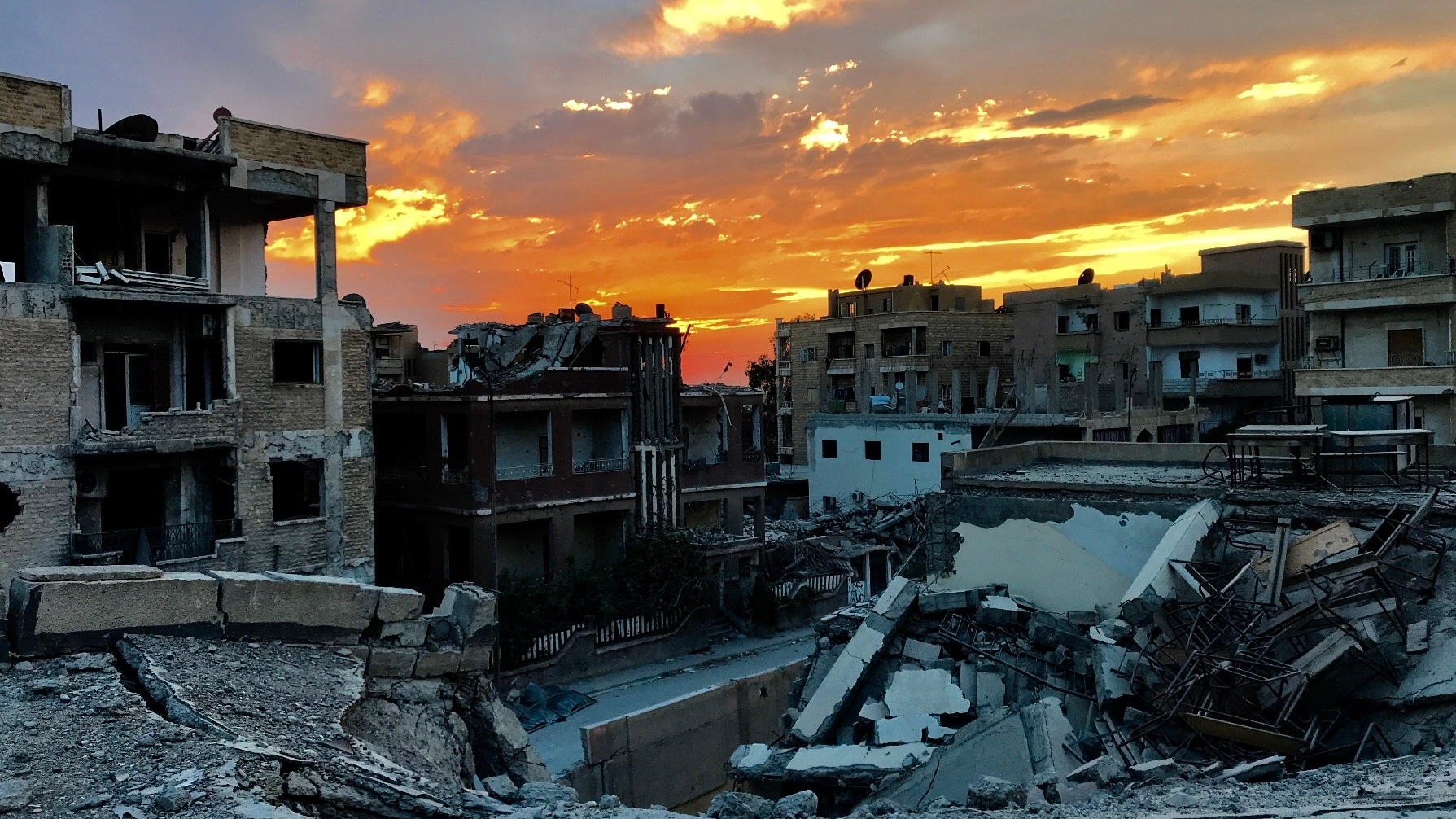 A photo taken at sunset from the Al-Thakana neighborhood at the center of Raqqa shows the partial destruction of several buildings, including a school

The ISIS fighters inside Raqqa had dug in for a last stand after three years of fighting across Iraq and Syria. They had tunneled between buildings and draped canopies over streets to hide their movements from aerial surveillance. They had rigged the city with explosives and herded civilians into front-line positions as human shields. It would soon become clear that, despite overwhelming air power, the U.S. had not done enough to disrupt those preparations and weaken ISIS positions before the battle.

SDF forces pushing into the city were met with such brutal resistance that they nicknamed one ISIS position, at a traffic roundabout, the Circle of Hell. Pinned down by snipers, they would call for airstrikes—often giving U.S. planners just minutes to assess the target and look for any civilian activity nearby. Artillery teams just outside the city kept up such an intense barrage to support the SDF that they burned out the barrels of two howitzers.

An estimated 11,000 buildings were damaged or destroyed, including hospitals, mosques, schools, and water facilities.

SDF fighters finally pulled down the ISIS flag that had flown above the Circle of Hell in October 2017. All around them, an estimated 11,000 buildings were damaged or destroyed, including hospitals, mosques, schools, and water facilities. A U.S. commander told The Washington Post it had been some of the most intense urban fighting since World War II.

The Pentagon has acknowledged that U.S. airstrikes and artillery fire “more likely than not” killed 178 civilians during the battle. Outside organizations like Amnesty International and Airwars say the true toll is many times higher than that. Their workers, often on the ground in Raqqa, have identified 744 civilians whose deaths they attribute to U.S. strikes, and have reports of hundreds more.

What happened? The Pentagon itself asked RAND to answer that question, and to scrutinize its entire approach to protecting civilians. Researchers interviewed more than 80 people involved in the battle and its aftermath, from commanders to planners and pilots to humanitarian aid workers and journalists. They reviewed thousands of pages of after-action reports, civilian casualty assessments, and strike logs.

Raqqa, they found, was a “perfect storm of strategic and operational challenges. … a cautionary tale about civilian harm in 21st-century conflicts.”

The vast majority of airstrikes, researchers found, were not well-planned in advance. They were what the military calls “dynamic” strikes, often called in by fighters on the ground, with little time to mitigate risks to civilians. Military planners, meanwhile, were “starved of local information.” With few U.S. intelligence sources inside Raqqa, they had to rely on aerial surveillance, which could not see civilians huddled in the basement of a building or under a collapsed roof. And SDF forces fighting block by block often preferred to take down an entire building with an airstrike rather than take more casualties to their dwindling forces by searching it for a single sniper.

The U.S. decision to encircle Raqqa made it far more dangerous for civilians trapped inside the city to find their way to safety.

The military's failure to “shape the battlefield” with precision strikes before the battle meant that ISIS fighters could keep falling back and regrouping, often into densely populated areas. The U.S. decision to encircle Raqqa made it far more dangerous for civilians trapped inside the city to find their way to safety.

“Military officials would say, 'We totally respect the law of war. We never intended to harm civilians,'” McNerney said. “And that was true. They weren't trying to kill civilians. But they could have operationalized that better and really thought through the risks to civilians from the very earliest stages of planning.”

Late one night in the lead-up to the battle, the U.S. bombed a former school where it believed ISIS was hiding weapons and fighters. When reports of civilian casualties started to emerge, officials reviewed surveillance images and—seeing no clear evidence of civilians buried in the rubble—dismissed the reports as not credible. Workers with Human Rights Watch went to the scene, interviewed survivors, learned that families had also taken refuge in the school—and produced a list of 40 people killed in the strike, by name.

RAND researchers saw that same pattern play out dozens of times. The U.S. military had said it would investigate any time a civilian death was more likely than not caused by its operations. In Raqqa, researchers found, officials required much more than that—a “smoking gun”—to investigate a civilian casualty report. Much of the time, as at the school, officials would review surveillance images showing the wreckage from a strike—but not who was buried under it—and say they saw no evidence of any civilians.

Even the records the military did keep on civilian casualties were often scattered on different computer servers. In one case, an official investigating a civilian casualty report had to get on a plane and fly to another country to retrieve a needed database. “I know from experience that data [on civilian casualties] are missing,” one operator told the researchers, “but I can't tell you how much.” 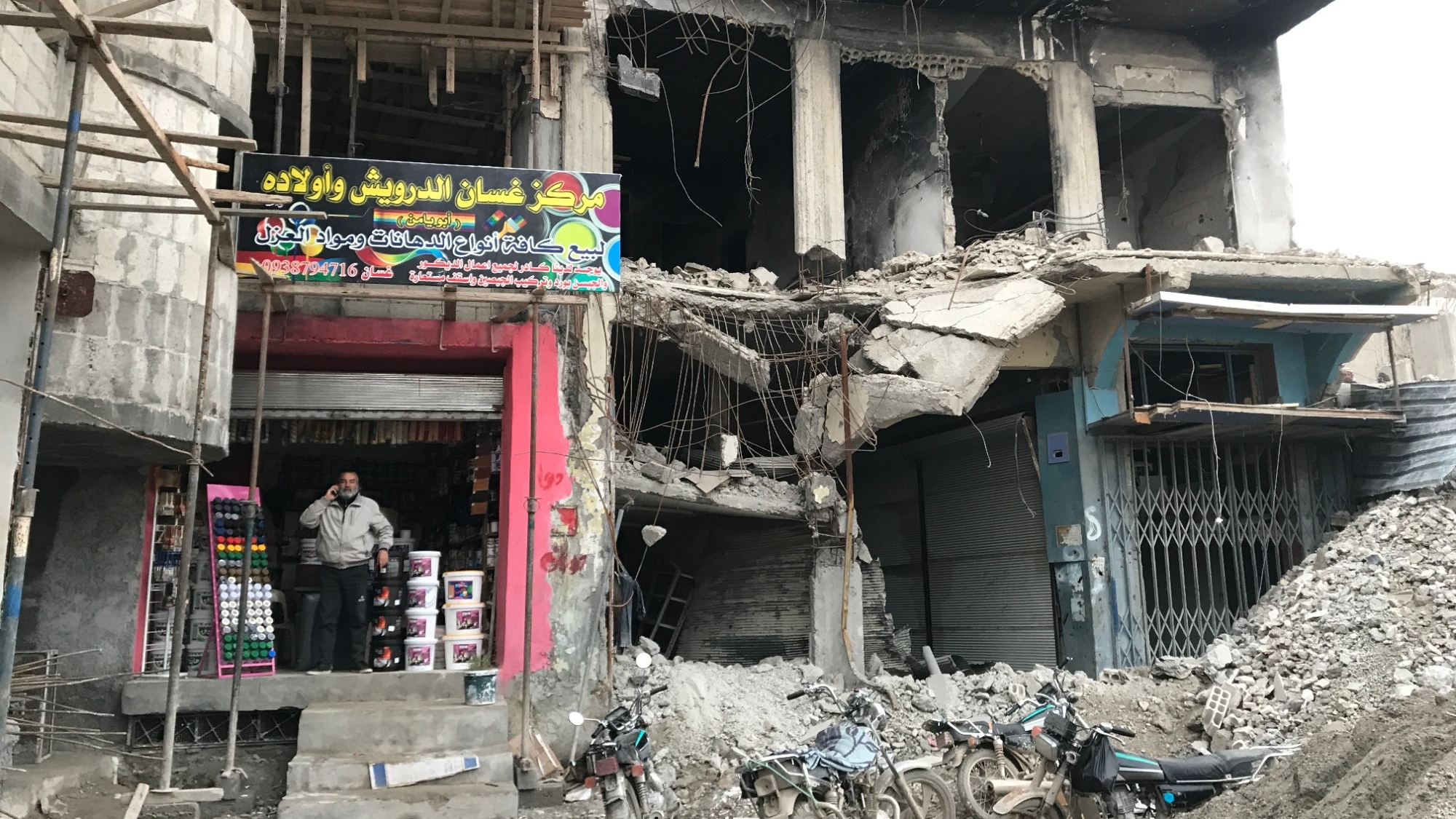 As a result, the military had no way to look across data for lessons it should learn. Civilian casualty assessments were filed away and forgotten, with no effort to put them together in a way that could reveal patterns. Even the units involved often didn't find out what had ever come of the assessments.

“The military simply does not have the right processes or systems in place to effectively learn from its mistakes and provide accountability to victims,” said Gabrielle Tarini, a policy analyst at RAND who helped lead the research. “Better data might sound boring, but it is critical for helping DoD understand the root causes of civilian harm and implement the right solutions in the next operation or conflict.”

The military should be more open to working with outside organizations on the ground to validate reports of civilian casualties.

The military should be more open to working with outside organizations on the ground to validate reports of civilian casualties, researchers concluded. It should overhaul how it analyzes, collects, and stores those reports—and improve its use of standardized forms to capture key information, from date and time to how the target was chosen to estimates of civilian harm.

More generally, it needs people in the Pentagon and in each command whose sole job is to worry about civilian casualties. It needs a “center of excellence” that can pull together expertise and data on preventing civilian harm, conduct research, and disseminate the lessons learned across the force.

Earlier this year, Defense Secretary Lloyd Austin called for a top-to-bottom review of how the U.S. military can better prevent and respond to civilian casualties. He was responding, in part, to RAND's reports—but also to investigative work by The New York Times that analyzed the military's own data and found a pattern of missteps in air campaigns in the Middle East that put civilians at risk. The U.S. has a “strategic and a moral imperative” to do better, Austin said.

That is going to require addressing issues that cut across the military, from training to planning to operations, researchers concluded. Otherwise, they warned in the final line of their report, “there is a real risk that the tragic circumstances seen in Raqqa will be repeated.”